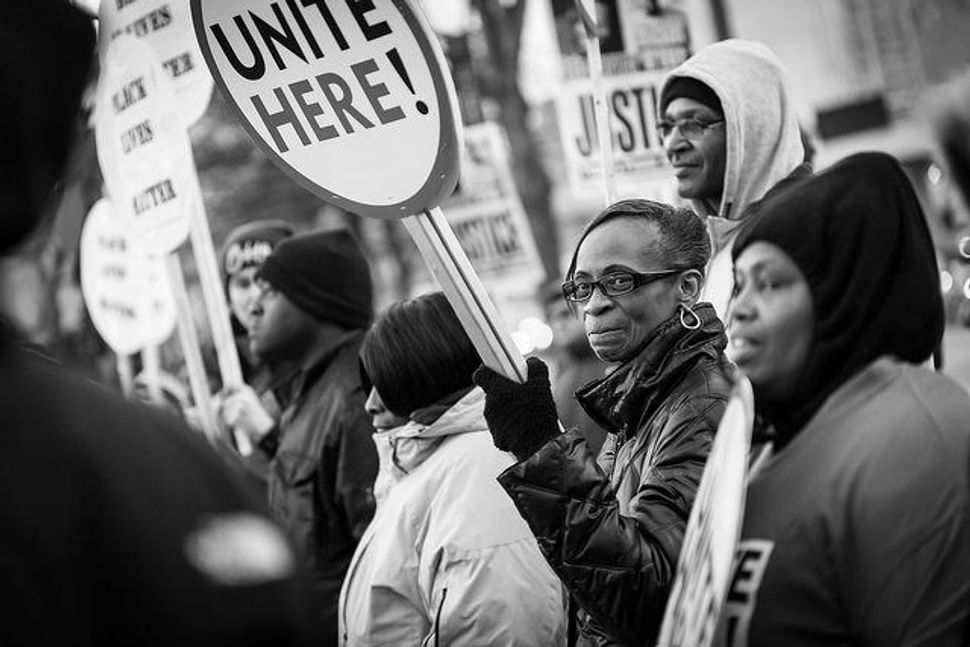 As coverage of the uprising in Baltimore in response to the death of Freddie Gray spread across social media this week, I noticed one observable phenomenon on my Facebook feed: white folks “praying for Baltimore.”

Prayer helps us cope. It’s a place to go when we are overwhelmed, when we need to feel like there is something in the universe that is paying attention. It’s where we seek comfort, but what’s happening in Baltimore, what’s happening in Ferguson, what has happened and what will likely continue to happen, and what we as white folks need to do to fix it is not about our comfort.

Publicly stating that you’re “praying” might be kind, thoughtful, sympathetic, but it’s not a substitute for activism, especially in a world where the statement “Black Lives Matter” is regularly challenged by white people who retort that “All Lives Matter,” refusing to recognize the complexities and realities of racism and white supremacy. While sympathy is something we’re encouraged to demonstrate, empathy isn’t a value in a capitalist society. It’s too dangerous. If you empathize with people, that feeling might influence you to act, and that’s threatening to structures that are meant to maintain the status quo.

It’s vital to have spiritual and emotional means of coping. Prayer can be used to rally a community. But if you are a white person who is “praying” and doing nothing else, you are not helping. That declaration is not a substitute for doing work. Work involves pushing yourself out of your comfort zone.

Exhaustion is a political tactic. People in power know this, that if you exhaust people, if you starve them and kill them and deprive them, the likelihood that they will just give up is pretty good. Except that that’s not what’s happening, people are not giving up, and the powers that be don’t know what to do with themselves. Or rather, we (I’m talking to the white folks reading this article), the people who created white supremacy and continue to perpetuate it and benefit from it literally every minute of every day, do not know what to do with ourselves. It is hard to know what actions to take, but that is not an excuse for not acting. There is no excuse.

In your quest to do the right thing, you will fail over and over again. You will fail even when you’re sure you’ve done the right thing, like posting a quote from Dr. Martin Luther King on Facebook or Twitter to prove your point about anything related to racism, protest, riots, etc. MLK’s theory has been sanitized in order to make him more palatable to white folks, when in fact, he was far more than the quotes you find referenced on social media. The problem here is not only that you haven’t done your homework about the (literal) whitewashing of the Civil Rights Movement, although that is a serious problem. By quoting MLK out of context, you are returning to a place of ease and comfort as a white person, because he’s a black person white people know about, and in doing so, you’re using black person to represent all black people. As white folks, we’re taught that people of color act as a monolith, so whether or not you know you’re doing this, what you’re saying is, “MLK was black! His ideas must be the same as every other black person!” To avoid doing this, just don’t do it.

If you are solely consuming media made by white folks, change that immediately. This might seem on the surface like a passive act, but quite the contrary. Drill a hole in your bubble – listen to experiences that are not yours, that you’re not familiar with, that challenge you, and encourage people you know to do the same. Start by following Stacia L. Brown, Deray McKesson, Ijeoma Oluo, Neta Elzie on Twitter, and listening to this podcast and these. When things make you uncomfortable, think about why you are uncomfortable. Stay that way.

Find other white folks who are organizing around dismantling white supremacy, i.e. Showing up for Racial Justice and Jews for Racial and Economic Justice.

Listen when people of color are talking. Do not interrupt. Do not place your feelings at the center. Listen harder and deeper than you ever imagined you could. Do some work. And then also, if you want to, pray.