Does ‘Breast is Best’ Apply in Synagogue? 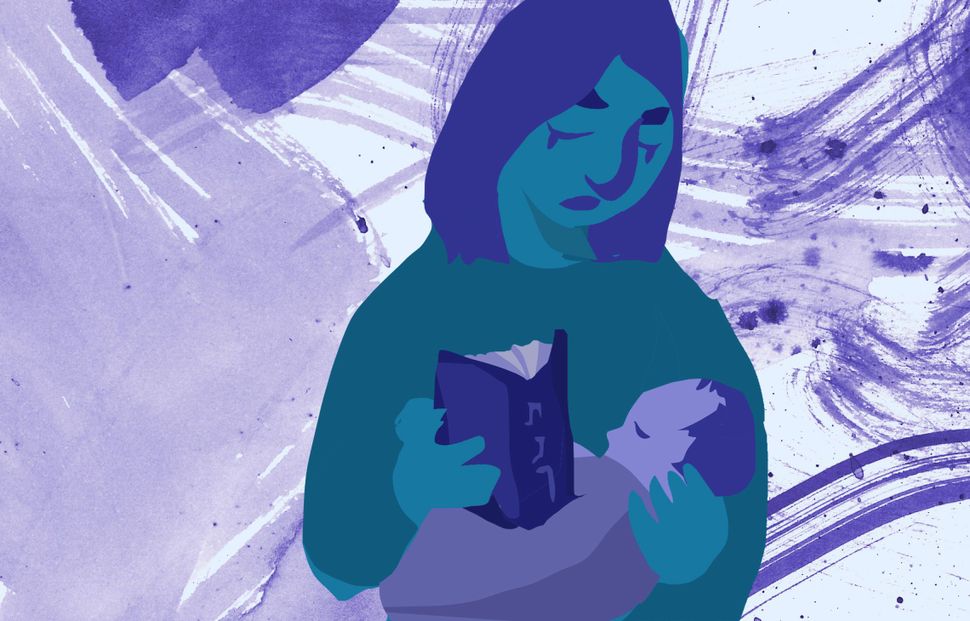 When model Nicole Trunfio appeared on the cover of June’s Elle Australia , the hashtag #normalizebreastfeeding generated on Twitter and Instagram, with both women and men discussing the importance of being able to breastfeed publicly without being censored or sexualized. Women posted pictures of themselves breastfeeding to social media platforms, demonstrating that the act is normal, necessary, and common.

It’s not unheard of to see breastfeeding happening on public transportation or in a restaurant, but what about in synagogue? Is there a space in the building to nurse? Can it be done in the sanctuary? Is it technically allowed but openly scorned by congregants? In St. Louis, for example, Bais Abraham Congregation has signs posted throughout the building indicating that it is a “Family Friendly Space.” Nursing is welcome in all parts of the building, and there are more private space available in staff offices. But what if such signs don’t exist in a synagogue? How do you know if a Jewish prayer community is welcoming to breastfeeding mothers?

Rabbi Maya Resnikoff, a recent graduate of the Jewish Theological Seminary, is the creator of Nursing At Shul an online resource for folks looking for information on Jewish prayer spaces and policies around breastfeeding, as well as other aspects of general child friendliness. Resnikoff, a new mother herself, doesn’t always attend the same synagogue in Riverdale, New York, where she lives with her husband. “At one shul, I went wandering around looking for a nursing room, and I couldn’t find it, so I asked someone else I saw with a baby, and they told me that there was a nursing room, but they couldn’t find anyone to open it. There’s no way to find this information out, you have to guess. Will you get approving glances if you nurse in the lobby or the sanctuary, or will you be yelled at? If I want to know these things, other people do too.”

Resnikoff points to the irony of omitting information about breastfeeding and issues relating to children from community dialogue. “Mikveh is a much more private mitzvah than raising children, and there are databases about where you can find one, it’s easy, you don’t have to call a rabbi.”

Nursing At Shul features reviews, submitted by congregants, in regard to general child friendliness, including the presence or absence of changing tables in women’s and men’s restrooms, spaces for storing strollers, whether or not children are welcome in the main sanctuary, and where this information is available (is it posted prominently in the building or on the website?). “The first goal is to share knowledge, to find out the norms for different kinds of communities. It makes it harder for rabbis to weigh in on and stand behind policies if they don’t know people are thinking about these things,” says Resnikoff. “Things should be clearly labeled, lights should be on on Shabbat in nursing rooms, a mother who uses a wheelchair should be able to access that room.”

So far, Resnikoff has received information primarily from Orthodox and Conservative synagogues. “I would love to get more from Reconstructionist and Reform shuls, as well as independent minyanim,” she said. “I want this to be as inclusive as possible.” If you’d like to have your prayer community included in Nursing At Shul, you can find the “Synagogue Breastfeeding Friendliness Questionnaire [here]

Resnikoff considers it a priority to provide facts about the existing culture of a synagogue or community before pushing for overall acceptance of public breastfeeding in shul, of which she herself is a proponent. But just because one can breastfeed in synagogue doesn’t mean she will. Not all women are comfortable doing so, nor would they consider being able to breastfeed in shul a victory.

Sarah, a mother of three, describes herself as a “pretty public nurser.” As a teenager, she witnessed a female rabbi nursing through her aliyah. “It made a lot of people very uncomfortable,but I don’t know if there was any more discussion about it. I don’t think there’s any problem with nursing publically, but in a tefillah [prayer] space, I feel differently about removing part of my clothing. The concept of modesty affects my discomfort about it. I don’t think i would feel comfortable doing it myself, but I don’t think i would mind if someone else did it. I think it should be up to the parents to use their discretion.”

Entrenched in the issue of breastfeeding is the question of how much women’s participation is valued in communal prayer spaces. Chava, a mother in Brooklyn, doesn’t believe that the two are mutually exclusive. “Having a space where kids can go is more indicative of wanting women’s participation than being able to breastfeed in public. Men sitting in the women’s section because they think women aren’t coming, having somewhere to put strollers, not giving women the death glare the second their kid squawks. These have an impact on whether or not I show up.”

Does ‘Breast is Best’ Apply in Synagogue?