Pulpit Plus One: ‘Unspoken Expectations’ 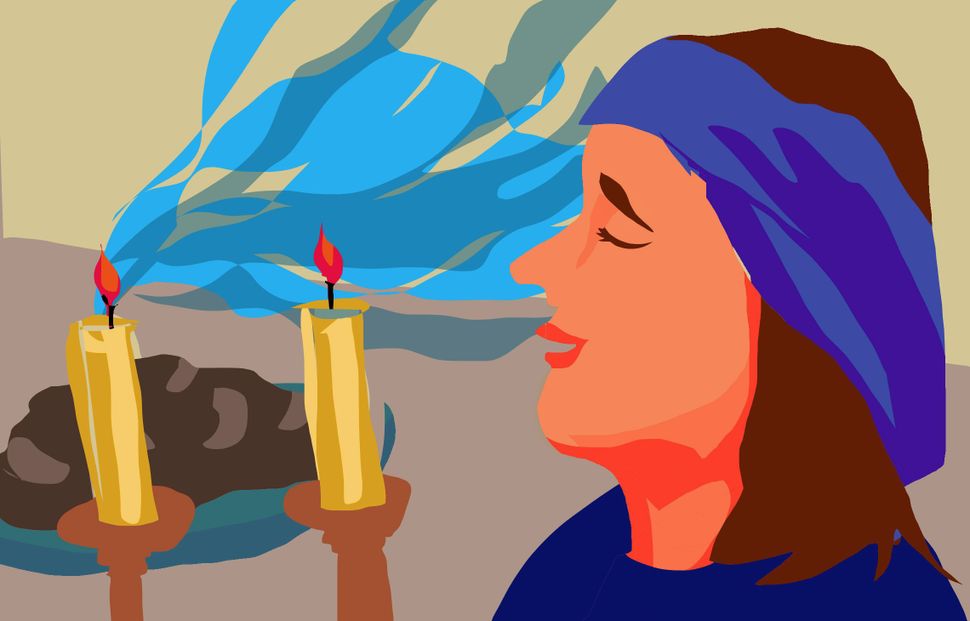 “Pulpit Plus One: The Secret Lives of Rabbis’ Husbands, Partners, and Wives” features the voices and experiences of the partners of pulpit rabbis. In this interview series, “Pulpit Plus One” takes an honest and lively look into the nuances of a complex role.

Hayley grew up Reform, and is married to Jason, a Modern Orthodox pulpit rabbi. Jason is the rabbi of a small Orthodox synagogue, where Hayley runs monthly programming for the synagogue’s Sisterhood. She is a stay-at-home mom, and they have two young children.

You grew up going to a Reform synagogue. What was your relationship to that?

I didn’t feel connected to the Reform movement, but I felt connected to being in a Jewish community. And I enjoyed Hebrew school — a lot. I was looking at the little descriptions at the bottom of the siddur [prayerbook] for extra information; I always wanted more.

When you and Jason first met, how did you feel about the fact that he wanted to be a rabbi?

I admired him for it. It was special, and it seemed to suit him very well. There was this religious aspect looming in the beginning, because I was like, “Oh gosh, his practice is much more advanced than mine.” But the context that we were in allowed for me to open myself up to it, and his practice really agreed with me.

We would sit outside, and learn together—that was the first time I actually dug deep and learned gemara [Talmud]. He was so enthusiastic and so inspired by it that it was very contagious, and took hold for me too.

What was the religious aspect like for you as the relationship evolved?

It was huge for me. Because I did not grow up Modern Orthodox, what was most at the forefront of my mind is that I was going to have a drastic lifestyle change. If I was going to move forward with this guy, I had to some deep soul-searching and think about every change that was potentially going to take place for me.

I thought about everything under the sun! Luckily I was exposed to a lot of people who lived that lifestyle, so I had an idea of some of the details.

Was it like a scoreboard, where you rated each detail you observed?

Oh, I’m not that methodical in my thinking [laughs]. It was mainly like: if it’s Shabbos, and I go to the bathroom or I need to brush my teeth, and the light’s out — am I going to brush my teeth with the lights out? Ordinarily, most people in the world would turn the light on because you have to see in order to do this kind of stuff. But here I am, stumbling around in the dark, and I’m like “Why am I doing this??” [laughs]

Or am I going to bentsh [say the grace after meals] every single time, even if I’m by myself? That was part of my process. So all these little things started adding up: am I going to cover my hair? Am I going to stop wearing pants? If we have a boy, is he going to wear a yarmulke?

I remember writing emails to friends, laying it all out and trying to think of all the changes that might happen. It was intense and it was hard. And I was thinking a lot about na’aseh v’nishma ] that was the main thing: I was just going to try it, just going to do it. Because that’s the only way that you can actually know if you want to do it or not.

I’m kind of still in that. I still don’t necessarily love everything, and I question it all, but I do it-and I get glimpses here and there of really understanding it.

At this point, who are you doing it for? Is it for Jason? Is it for you?

When you guys arrived at this pulpit, were there any explicitly stated expectations of your responsibilities? How did people understand your role?

No one said anything outright—it was completely up to me. They welcomed anything I could offer, anything that I wanted to give.

This community is really a good fit for us and for me: because of the size of it, because not everybody is super-observant, because people are generally understanding and welcoming—it’s a comfortable place for me.

How have you understood your role?

In the beginning I thought everyone was judging me, watching me daven [pray] or not daven [laughs], or expecting me to have the most delicious challah, or dress a certain way…I was very concerned about people’s perceptions of me before we came.

But now I just feel like they’re accepting, as long as I’m open to them. Being a consistent, friendly face, talking to people on Shabbos about their week and what’s going on with them and their families: that’s base line. It’s sweet, and I enjoy connecting with people and hearing about their day-to-day lives.

I do programming for the ladies and sometimes it’s hard to prepare, and to figure out if I have the Jewish knowledge or the Jewish teachings that they’re looking for. I’m not formally trained in Jewish education, so sometimes it’s challenging because I want to be able to give that but I don’t fully know things.

[But] it’s more pressure on myself that I’m creating — because I don’t think the women are actually looking for that in me, you know? I just create that stress.

Are you ever compensated for your time?

That’s interesting…no, I am not compensated. I’ll get a nice big thanks from someone, or a nice email. That’s about it.

I never thought about it, actually. It’s hard to say, because it’s weird, like: “Oh, it’s part of my husband’s salary”, and I’m just in it—but I’m not an employee. So that’s kind of a complicated thing to consider.

I mean, I feel like a pressured volunteer. It’s not volunteering just out of my own heart—it’s half that, and half this unspoken expectation that is bestowed upon us by being married to a rabbi [laughs]. So, yeah, I don’t know.

I’m curious about some of the effects this role has had on your life. If you’re comfortable sharing, how has being in a pulpit impacted your relationship with Jason?

It gets hard sometimes when he has to work and I have to take care of the kids. He teaches a lot at night, and to put two kids to bed—and feed them, bath-time—it’s really hard to do that alone. Sometimes I get mad, but then I’m like, “Okay, Hayley, be quiet, he needs to work.” So that’s hard.

But on Shabbos, when he’s up there, giving his dvar Torah [sermon], it’s beautiful. I see him at home practicing, or he’ll give over some teaching that he’s thinking about, and then when I see him string it all together up there, I’m so proud.

And I like to look around and watch the congregation listening to him, and see how they respond, and watch them nod their heads, or laugh—that’s cool.

And what has it been like with your family, in terms of this role and this lifestyle?

My family members get a kick out of calling me rebbetzin [Yiddish, “rabbi’s wife”]. They think that’s fun.

They think I’m the same—I’m the exact person I’ve ever been to them, I just happened to marry an Orthodox rabbi. But they love it! I mean, they love him, and they love going to him with questions, and they’ve learned so much from him. We’ve definitely opened their eyes to a more observant Shabbos experience, so that’s really wonderful.

That’s refreshing to hear. A lot of times, families are totally spooked by it.

Yeah, it was there in the beginning. Before my mom met Jason, she was like, “Oh my god, Hayley, please don’t wear a wig.” And I’m like, “Mom, don’t freak out.”

Your family likes calling you “rebbetzin”—how do you feel about the title in general?

I like it. I think it’s beautiful. I do. And I did not earn the title by doing anything, or by proving that I have certain knowledge, but…why not? To be able to search within and find the rebbetzin in myself has been a really great opportunity. I think it’s empowering.

We talked a little about the challenges—these days, what do you find rewarding about this (not-so) new lifestyle?

You know, the lazy Shabbos. That’s really something special. It’s like enforced laziness, once you get home from shul—you just hang out. And that’s a beautiful thing.

Also, knowing that I am part of a family that is practicing Judaism in a way similar to my ancestors. My grandmother recently said that if her dad was in heaven before, now he’s in second heaven because his great-granddaughter is living a traditional Jewish life. I like recreating the images and rituals of old—the smells of Shabbos, lighting candles with my daughter, the sound of my husband learning. It’s very sensory and very ancient. It makes me feel rooted.

Pulpit Plus One: ‘Unspoken Expectations’