The Tax Lawyer Who is Reinventing Jewish Music as Brazilian Song 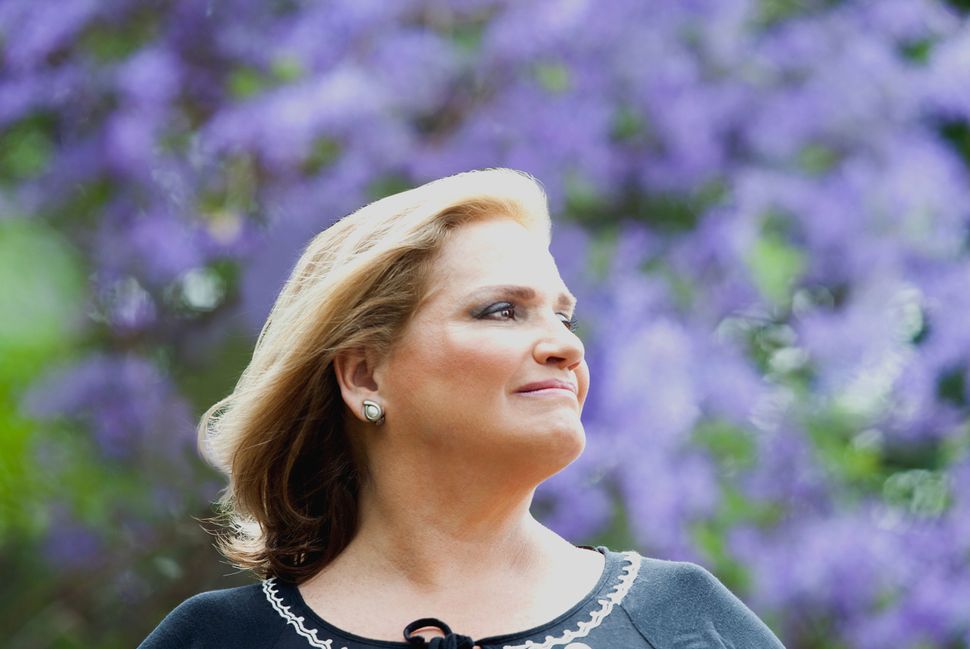 “Raizes” is not exactly “My Yiddishe Samaba Mama” — but it is close.

“Raizes” — Portuguese for roots — is the newest album from Nicole Borger, a woman whose background is as unique as her music: Jewish songs such as “Abi Gezunt” and “Shlof Mayn Feigele” sung to a Brazilian beat.

Borger — she records simply as Nicole — was born and raised in Sao Paulo. Her father was American and her mother Portuguese and how the two met in Brazil is the kind of story they write far-fetched romance novels about.

Nicole’s maternal grandfather was an Austrian rabbi assigned to shepherd the Sephardic community of Lisbon in the late 1930s. “In 1942, I think, a ship was sent from America to Europe to collect Jewish orphans and bring them to America,” Nicole said during a telephone interview with The Forward. Not permitted to dock in France, it was about to return home empty. Instead, the Portuguese Jewish community arranged to send some of its children to safety on the ship. The rabbi sent his 13-year-old son — Nicole’s uncle — to live with a family in Mt. Vernon, New York, where he became best friends with the boy who — wait for it — was his future brother-in-law.

The coincidences keep piling up. In 1952, the rabbi tired of life under dictator Antonio Salazar, moves to Brazil. The man who would be Nicole’s dad gets a job working for an American company in Brazil. He looks up his high school buddy, meets his buddy’s sister and decides to set down his “raizes” in Sao Paulo.

For Nicole it was a reasonably idyllic upbringing. “I was raised Conservative,” she said. “My [happiest] memories are of Shabbat dinner, sitting with him and singing. My grandfather was a rabbi and a cantor with a beautiful baritone voice. My grandmother was a soprano, and everybody sang a lot.

She went from singing Hebrew to Ladino to “Latin American songs which were provocative, protest kind of songs. That’s when my parents became worried for my safety.”

This was in the late 1970s; Brazil was ruled by a military dictatorship that frowned on (and imprisoned) artists who disagreed with it. So Nicole’s parents pressured her to put her show business dreams on hold. Instead, she attended university, became a tax lawyer and joined the firm that now is PricewaterhouseCoopers. She became the firm’s first female partner in Brazil and in the early 1990s left that company to found her own firm.

At the turn of the century, as her firm prospered, she returned to singing. “I started out with an amateur choir,” Nicole said. “The conductor told me, ‘you have such a lovely voice. You could do so much more.’ I told him I was dying to, but didn’t know where to start. He introduced me to a pianist, who became my first mentor.”

He encouraged her singing, her song writing and produced her first album, a collection of jazz, samba and bossa nova standards. Her second came about in a random fashion. “I went into a book store and a book of sonnets by the Portuguese writer Florabela Espanca literally fell from a shelf into my hands.”

Espanca (1894-1930), a poet and feminist was the first woman to enroll in the University of Lisbon law school. Coincidence? Nicole put Florabela’s words to music in her second album. And continued to live what she calls a “Jekyll and Hyde life. During the day, head of a law firm that ‘pays the bills’ and at night a ‘struggling artist.’”

What works in her favor is that “most of my clients are fans and come to my shows.”

But memories of her grandfather lingered. She started finding work in Jewish clubs singing Jewish songs almost exclusively in Hebrew. That prompted her to “do some research on Yiddish and I discovered a huge treasury of Yiddish songs. That was the trigger to everything I’ve done since.”

She started appearing at Jewish musical festivals around the world and, in 2010 started one, Kleztival, in Sao Paulo with her husband, Edy, and Klezmatics trumpeter Frank London. “It started as a klezma festival, but now all parts of Jewish music from around the world are part of the mix, much of it — like her latest album — infused with a Brazilian beat.

“These songs,” Nicole said, “made the same trip my family did from the shtetls of Europe and I am trying to bring them to Brazil.”

The album is available for download from soundbrush.com. For those in the New York area, Nicole is holding a CD release show at DROM on June 27.

The Tax Lawyer Who is Reinventing Jewish Music as Brazilian Song