The Rosa Parks of Israeli Cemeteries 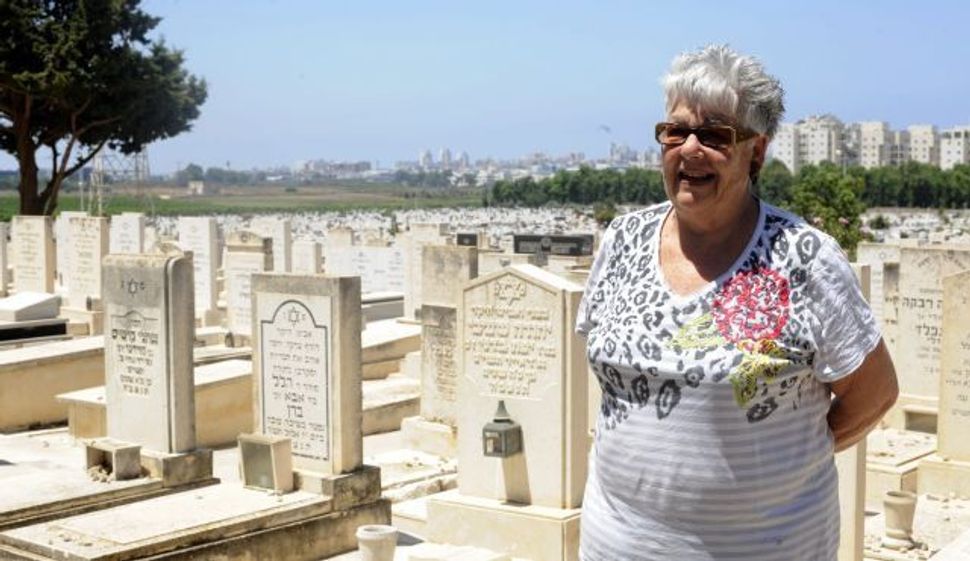 Susan Ahyed’s long fight for justice, culminating in an Supreme Court victory last week, began with a rather morbid thought.

A former New Yorker, Ahyed had been attending an old friend’s funeral in her hometown of Netanya in early 2011, when she suddenly noticed the signs pointing women in one direction and men in the other. When she ignored them in order to get closer to her grieving male friends, the officiating rabbi instructed her to move back to the women’s section.

“I felt terrible,” says the retired grandmother, who moved to Israel in the 1960s, “but all I kept thinking is what’s going to happen when I die? Are they not going to allow my son to stand with his sisters at my funeral?”

That was four years ago. Ahyed, who is not affiliated with any religious movement, left her friend’s funeral resolved to challenge the right of the country’s Orthodox-run burial society, known as Hevra Kadisha, to segregate women. She began her battle in the small claims court in Netanya, which rather than rule on the case, directed her to the local magistrate’s court.

At this point, Ahyed’s cause was taken up by the Israel Religious Action Center (IRAC), the advocacy arm of the Reform movement in Israel. Just around that time, in January 2011, the Supreme Court had ruled that forced gender segregation on buses was illegal. IRAC attorneys hoped to use Ahyed’s case to prove that this landmark ruling applied to segregation in all public spaces and not just buses. (It has since won eight cases in court involving gender segregation on buses, based on the Supreme Court ruling.)

But much to their chagrin, in May 2013, Magistrate’s Court Judge Smadar Kollender-Abramovich ruled against Ahyed, claiming that the funeral participant had not been forced to move to the women’s section by Hevra Kadisha, as she maintained, but rather asked. In August 2014, District Court Judge Varda Plaut upheld the lower court ruling.

‘How could I make a scene at a friend’s funeral?’

Ironically, just as Ahyed was facing a losing battle in court, the struggle against gender segregation in Israel was making major advances. In May 2013, Attorney General Yehuda Weinstein adopted a Justice Ministry report that recommended fighting gender segregation in all public spaces, including cemeteries. The report also deemed it illegal to prevent women from delivering eulogies at cemeteries.

In another well-publicized case, Rosie Davidian, an observant woman from the southern town of Ofakim, won NIS 30,000 (about $7,900) in damages after she appealed a Hevra Kadisha ban on her eulogizing her father at his funeral.

After Weinstein adopted the Justice Ministry report, the Religious Affairs Ministry issued new directives banning segregation in cemeteries. Since then, reports Orly Erez-Likhovsky, IRAC’s legal department director, almost all signs separating men and women at Israeli cemeteries have been taken down, including those first noticed by Ahyed in Netanya. “As a matter of practice, we also make spot checks and wherever we find these signs still up, we take action,” says the IRAC attorney.

Despite two upsets in the lower courts, IRAC appealed the Ahyed case to the top tier. “It’s very rare for the Supreme Court to intervene after a second appeal, but we were very concerned about the negative implications of having these two rulings on the record,” explains Erez-Likhovsky.

Last Thursday, the Supreme Court overturned both the magistrate’s and district court verdicts in Ahyed v. Hevra Kadisha. It also ordered that Ahyed be reimbursed for her court costs, amounting to several thousand shekels.

After conducting an uphill battle for the past four years, she says she finally feels a sense of vindication. “I hope this will be a precedent that will let people grieve the way they want to grieve, with no limits,” says Ahyed.

The Rosa Parks of Israeli Cemeteries