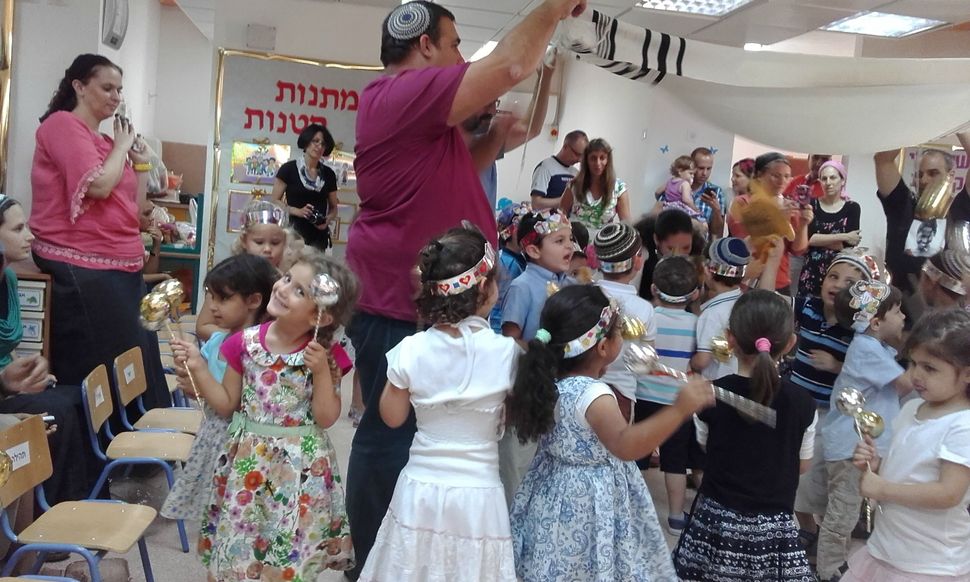 It was the end-of-year party at my daughter’s religious preschool in the Israeli city of Modi’in, where we live. Raising cardboard Torahs aloft, around 15 children jumped up and down beneath a tallit held up by some of the dads. In a mixed-gender class of 35, not one of those children was female.

The theme of the party was gifts, and the Torah was one of the gifts the children were celebrating. It is, of course, also considered the core of traditional Judaism and something that belongs to the entire Jewish people.

In the classroom, the Torahs, gold-colored on one side and carton-brown on the other, were handed out to boy after boy as I tried to convince myself that my daughter and the other girls in her class would – obviously! obviously! – also be given possession of the gift they were meant to be celebrating, would also be portrayed as a part of the Jewish people.

“It’s okay, they’ll get to the girls next,” I thought as I noticed that my almost 4-year-old and her female peers in the city-run preschool were left in their seats while one boy after another held up his Torah in the middle of the room. And then there were no more Torahs. Instead, the girls received glittery wands meant to represent the rimonim, the pomegranate-shaped ornaments used to beautify real Torah scrolls. The girls stood up and followed the instructions: to form an outer circle of decorative objects, in the most literal way imaginable.

I felt enveloped by a disbelieving sadness, and had one more thought: “Oh no, not again.”

The first time was at my oldest daughter’s third birthday party at her daycare center in Givatayim in 2010, when the ultra-Orthodox accordion-playing music lady led up to a song lauding mothers by asking the kids questions that were apparently meant to have only one answer: “Who makes your food?” “Who takes you to school?” “Who washes your clothes?” The daycare center was run by the ultra-Orthodox Sephardi Shas party, though, so I figured it was just a frustrating but brief glimpse into Israel’s Haredi education system.

But then we moved to Modi’in, which calls itself a city but is basically a middle-class commuter suburb midway between Jerusalem and Tel Aviv, with a mix of religious and secular residents and almost no ultra-Orthodox presence. The outer markers of religious observance are varied here, with some married Orthodox women covering their hair and wearing only skirts, and others doing one or neither of those things. In addition to the many traditional Orthodox synagogues, Modi’in also has an egalitarian Orthodox congregation (one of the two shuls I regularly attend with my girls), along with a Conservative and Reform synagogue; and in a country with strictly segregated school systems, the city hosts a school with a mixed religious and non-religious student body. In short, this is not the kind of place where I expected my daughters’ schools to reduce their horizons.

But in the end-of-year show for the 2011-12 school year, our first in Modi’in, the boys in my oldest daughter’s preschool class were given toy barbells to show the parents how strong they were, while the girls sat and watched. The teacher dismissed my complaint. This Hanukkah, my kindergartner’s class reenacted the story of the Jews hiding in caves from the Romans, but there were no dreidels involved; instead, the boys were given prop siddurim so they could pretend to pray while my 5-year-old and the other girls were handed dolls – not to play with but to take care of, because, as they were not so subtly being told, religious ritual is best left to the boys, especially when there are babies to be held.

True, these experiences probably won’t singlehandedly convince my daughters that they are weaklings who are excluded from Judaism and should aspire only to be decorative objects or caregivers – in part because they see alternative examples at home and at shul, because they are used to thinking of themselves as strong girls, and because I have discussed these episodes with them in an age-appropriate way. Sometimes it’s the educational institution itself that’s sending out mixed messages. When I spoke to the preschool teacher at the end of this year’s show to politely explain the problem I had with it, she told me she had already planned another round of dancing with the Torah, for all the kids in the class (many preschool shows, including this one, are planned by external teachers, often Haredi, who come in once a week to run a music activity). But I don’t think any of this lets us – as educators, as parents of both girls and boys, as a society – off the hook.

We shouldn’t simply discount the explicit and implicit messages children are getting from schools, which can have real-world implications. A new study found that girls in secular public schools consistently performed 25 to 30 points higher on the psychometric exam, the Israeli version of the SAT, than girls in religious public schools. Giving his explanation of the results, Shmuel Shattach, the director of Ne’emanei Torah Va’Avodah, the religious Zionist organization that commissioned the study, told Haaretz: “It’s not that the religious schools tell women to ‘Stay home and shut up,’ but there is a perception that a career undermines taking care of the family.”

One of my goals as a parent should not be to counteract the messages my children receive from school, especially since the older they get, the less I will know what is going on behind the classroom door. And leaving this kind of education to the family means girls who are already learning at home that they should be more concerned with helping their younger siblings than with their studies or their Judaism can too easily get left behind. I want my children’s schools, from preschool on up, to be imbuing them with a feeling of possibility, not of limitation or exclusion. Schools should be showing girls more of the sky – not covering it up, one sparkly wand at a time.