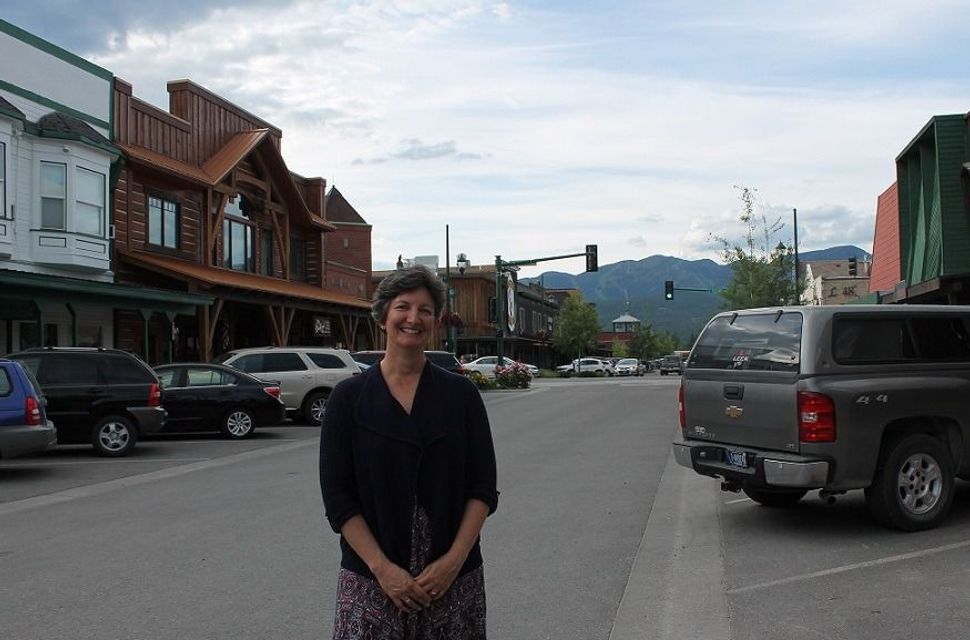 The first woman in the movement to head a congregation with more than 500 members, Roston, the spiritual leader of Congregation Beth El in South Orange, New Jersey, also published Op-Eds in local newspapers, gave talks at the Jewish Theological Seminary and more than once had a sermon cited in The New York Times.

But after nine years in the pulpit, Roston was burnt out. She wanted a break from synagogue politics, working weekends and putting communal needs ahead of her family.

So about a year ago, Roston and her husband moved with their two children to this Montana city of 6,000 near Glacier National Park, about an hour from the Canadian border. Now, instead of spending her mornings at synagogue services, Roston might be kayaking, hiking or walking her dog on a mountain trail. Most precious of all, Roston says, she gets to sit down and have a home-cooked dinner with her kids, a 12-year-old son and 15-year-old daughter, every night.

“I was tired and needed a break,” Roston told JTA. “I could have looked to go to the next step up. Instead, we’re opting out. I’d sat at many bedsides and been at many funerals, and my husband and I thought: Life’s too short. Let’s create the life we know we want.”

Despite its name, there’s nothing really Jewish about Whitefish, a place best known for the 6,817-foot ski mountain that carries its name.

But as Roston starts her second year here, she’s finding herself drawn back into Jewish leadership. Over the last year, she has organized Jewish holiday celebrations and made Shabbat services and potluck dinners a regular monthly event. She’s also been instrumental in facilitating a new, unified Jewish community for the roughly 100 known Jewish households in Whitefish and nearby Kalispell, where there long has been a Reform community but only sporadic meet-ups and no synagogue building. On June 30, Kalispell and Whitefish voted to create a new combined community called Glacier Jewish Community-B’nai Shalom.

Though Roston is positioning herself as the rabbinic leader of this unaffiliated congregation without walls or membership dues, she is not looking to re-create a rabbinic pulpit so much as to become a facilitator of Jewish life in a place that hasn’t seen much of it before.

“I’m going to be the non-Chabad Chabad, the non-Orthodox Chabad,” Roston said. “I want to do things that increase people’s own positive Jewish identity, but also expose the larger community to the Jewish people in a positive way. I’ll be the community’s rabbi, but I’ll also open my own shingle so the things the community wouldn’t necessarily want to do or pay for, more outreach-oriented things, I would do on my own.”

In Roston’s vision, that means organizing not just services and holiday celebrations but also challah-baking workshops at the local bakery, Jewish storytelling at a local coffee shop, a biweekly Torah study class at a Kalispell diner, an Israeli film showcase and even a Jewish music festival.

“My rabbinate has always been about making Judaism accessible, about showing people that Judaism isn’t too difficult for anyone,” Roston said. “Here I get to figure out how I can translate the ritual and make it modern and make it meaningful for people who want Judaism in their life.”

Living as a committed Jew in Whitefish is not without its challenges. For one thing, there’s no kosher meat or chicken here. Roston has visitors bring her supplies whenever possible or she splurges on shipments from Grow and Behold, the Brooklyn-based supplier of pasture-raised kosher meat. She is already trying to figure out how to provide proper bagels for her son’s bar mitzvah next year.

For another, there are almost no Jews. Roston’s kids went from a Solomon Schechter day school in New Jersey to Montana public schools, where her son waited weeks before he felt comfortable enough to disclose his religion to his classmates.

Though Whitefish is home to the white supremacist Richard B. Spencer, president of the National Policy Institute (“dedicated to the heritage, identity, and future of European people in the United States and around the world”), Roston says her family hasn’t experienced any anti-Semitism in Montana — just curiosity.

Roston’s husband, Marc, an investment and private equity consultant, has kept his career, and like many professionals who move here spends a lot of time on airplanes and on the phone. When he has an hour or two of downtime between work calls, he’ll often steal away for a quick hike or bike ride or, in winter, skiing at Whitefish Mountain Resort.

“I get to ski like other people go to the gym,” he said.

There are other differences to living in Montana. Nobody honks – ever. Roston does recall that Marc was backing up once and a pickup truck gave him a gentle warning beep. The driver then got out of his vehicle to apologize.

Northwest Montana is almost entirely white and Christian, but Roston says her kids experience more political and socioeconomic diversity than they did back East. When her son brought matzah to school on Passover, a few of his friends said they had gotten some boxes of it from the local food bank.

The main things that drew the Rostons to Whitefish were the slow pace of life, friendliness and access to nature. On clear days, the family can see a couple of the 25 glaciers left in the national park from the deck of the new house they bought here a year ago. The park is renowned for its emerald lakes, copious bear sightings and Logan Pass, which at 6,646 feet marks the continental divide and is a favorite spot for sledding as late as the Fourth of July.

Roston says it’s all been a welcome break from the pulpit.

“Rabbis, ministers, priests – there’s a point where you’re giving out and you have to make sure you have enough spiritual energy coming in,” Roston said. “I was really drained. In nature I refuel. I feel more connected with God’s power and presence in the world than I did.”

As for her children, Roston says Whitefish has been good for their Jewish identity.

“What I’ve tried to say to myself and my kids is this is more what the larger world is like,” Roston said. “We talk a lot about what they believe in and if they stand out and how to speak up for Israel and negotiate their identity in the larger, non-Jewish world. I’m happy that’s happening when my husband and I are with them rather than the first time they leave the bubble and go to college.”

Though she sometimes misses the rich Jewish life available on the East Coast, Roston says the move was worth it overall.

“Your Jewish life is what you make it,” she said.