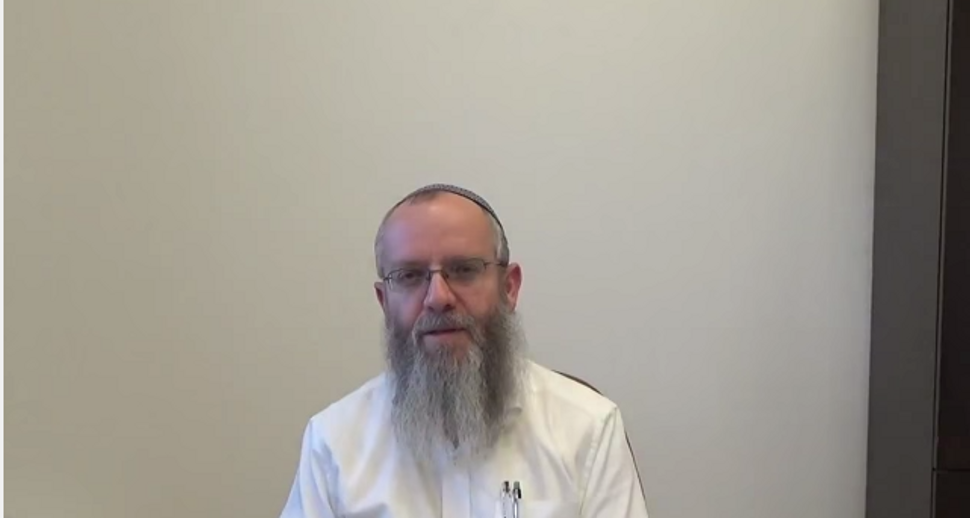 Over the past week, two men heading religious institutions in Israel have been added to the notorious roster of suspected sex predators in the religious Jewish world.

Rabbi Ezra Scheinberg was caught by police two weeks ago at Ben Gurion airport trying to avoid arrest on charges of rape, sexual harassment and indecent assault. Ten women have come forward so far and the police expect more complaints now that the court lifted the ban on releasing his name. According to the complaints, Scheinberg would rape women who came to him for spiritual counseling, and told the women it was part of their healing treatment. The police conducted a search of his house and removed computers, cell phones and other equipment.

Scheinberg, the 47-year-old founding head of Orot Ha’ari yeshiva in Safed, is considered a leading religious Zionist kabbalist and was known for his mystical “blessings” and abilities to “see” into people’s souls. He was considered a protégé of the late chief rabbi Rabbi Mordechai Eliyahu, father of Rabbi Shmuel Eliyahu, the current chief rabbi of Safed. Eliyahu has since disassociated himself from Scheinberg, and ordered him to leave Safed and resign from his yeshivah post. Judge Uri Shoham allowed the publication of the rabbi’s name in order to “encourage other complainants, who have requested not to expose themselves until now, to testify about what the suspect did to theme. There is also room to warn the public against him.”

According to police reports, Scheinberg, who is married and has eight children, had a confrontation with one of his accusers earlier this week, in which he said the sex was consensual. The woman in turn called him “impure.” The woman wrote in a letter to Scheinberg, “Thank God I am free of you…Thanks to your arrest, we can lift our heads again…We know you’re the evil one and we are fine, that you are twisted and we are straight, you are impure and abominable and we are the victims…After all these years of your intimidations, we are no longer scared. Your scare-tactics no longer work on us….If you had one drop of integrity of justice, of truth you would ask for our forgiveness. But your heart was always made of stone”

Although Orot Ha’Ari students originally responded with shock, they no longer seem to be backing their former rabbi. His books have been thrown in a big trash can, and staff are calling him “an abomination”.. One of his former students wrote a scathing testimony accusing Scheinberg of being “an actor who fooled us all,” a rabbi who was never around the study halls of the yeshivah, and about whom “nobody could tell you what he did with his free time–and he had a lot of free time.” The student added that nevertheless, “he knew how to present the image of the highest tzaddik [righteous man].”

The most significant backtrack is of Safed Chief Rabbi Eliyahu, who went from being Scheinberg’s top ally to his greatest detractor. “The rabbi is evil,” he told reporters. “At first we thought that his actions were simply a moral breakdown and had no criminal aspects, and we suggested that he stay away from the public. He accepted all the conditions, but didn’t fulfill them. He continued talking to students and justifying his corrupt actions. We removed him from the city, and that gave the first woman the courage to complain after keeping the pain in her heart for 13 years. She was then followed by all the others.”

Oddly, within this statement is the admission that people knew for many years about Scheinberg’s proclivities. Dr. Hannah Kehat, one of the founders of the Takana forum that was established by Orthodox activists to investigate complaints of sexual abuse within the religious sector, wrote a fuming letter to Eliyahu in response to this admission:

“In light of the great mystery about why so many women, victims of Ezra Scheinberg, remained silent and didn’t complain–rabbis, it’s your fault! Yours, too, Rabbi Shmuel Eliyahu! Twelve years ago you planted the seeds of evil. You waged terror against any woman who dared to complain. I blame you! Twelve years ago, 120 religious Zionist rabbis heard complaints from women who were sexually molested by Rabbi Aviner–and you came out as one united body in a grand shaming of the victims. You didn’t meet the women or hear their stories or try to understand what happened before you passed judgment on them. I blame you for publicizing thousands of packshvilim [public notices] all around the country in which you declared that women who were sexually molested by Aviner were sick, provocative liars. You hurt these poor women worse than the sexual assault…Even after you realized the extent of your crimes, you refused to apologize in public…It is your fault that victims are afraid, that they remain quiet and hide the truth, because they learned that rabbis will support the offender and not the victims…Rabbi Shmuel Eliyahu…when will you finally come and publicly apologize…and take responsibility for the offenses you committed 12 years ago. Better late than never.”

Meanwhile, just as the religious community is digesting these events, a new scandal is erupting. A man heading a mechina or post-high-school religious learning institution–whose name has still not been released–has been [accused of sexually molesting and raping over 100 women}(http://www.israelhayom.co.il/%2Farticle%2F299429) over the past several years. The women have found each other in a closed Facebook group dedicated to recovery from abuse by this man. He apparently used similar methods with many of the women, a series of emotional lies and manipulations in which he pretended to be a single, lonely, IDF officer who fought in Operation Protective Edge and lost soldiers on his team. In reality, he is a 38-year-old married father living in Ramat Gan.

Although this story is just beginning to emerge, it is a startling reminder that the religious community seems to be plagued with sexual abuse, especially at the hands of those in power. Barry Freundel, Jonathan Rosenblatt and Moshe Taubenfeld are among the most high profile cases of sexually abusive rabbis that emerged in the past year. But stories of religious sexual abuse often fail to get reported in the media.

Does Orthodox Judaism have a sex abuse problem? Is there something in the way social hierarchies or traditions of authority are maintained that enables sexual abuse to proliferate? Why do rabbis so often seem to be identifying the offenders instead of identifying with the victims? These are questions that the community would do well to ask itself in great urgency right now.