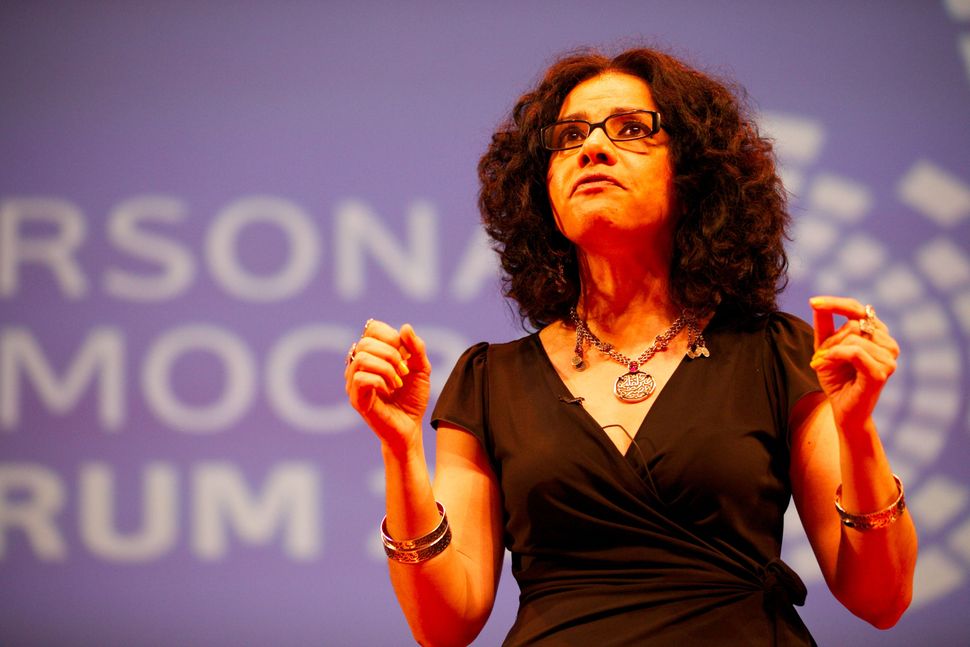 On April 23, 2012, in the midst of the Arab Spring, Mona Eltahawy, an Egyptian-born journalist, published an article in Foreign Policy magazine called “Why do they hate us? The real war on women is in the Middle East.” That article is now the first chapter of Eltahawy’s book, “Headscarves and Hymens: Why the Middle East Needs a Sexual Revolution,” a relentless catalog and documentation of the institutional misogyny, abuse and inequality that burden women (and men) in much of the Arab world.

It is also a sincere narrative of one woman’s physical, emotional and spiritual struggle to reclaim her body and her religion, including a first-person account of surviving sexual assault and brutal beatings at the hands of Egyptian state police. “The most subversive thing a woman can do is talk about her life as if it really matters,” writes Eltahawy. This fast-paced, sometimes excruciating but ultimately rewarding read is the platform on which Eltahawy does just that: She talks about her own life, and the lives of the women and girls she encounters, as if they really matter.

Eltahawy was born in Egypt in August 1967; when she was seven she moved with her family to the United Kingdom, where her parents earned doctorates in medicine. When she was 15, the family moved to Jeddah, Saudi Arabia, where her parents taught clinical microbiology to medical students and technicians at a university with separate campuses for men and women. There, she says, she was “traumatized into feminism.” To appreciate this book, one has to realize that Eltahawy’s main focus is her native region, and the way that her religion, Islam, has been misappropriated by the state to the detriment of everyone, but particularly women. Her claim, that her arguments could apply to any of the major world religions whose more radical and extreme expressions are currently used to bolster oppressive states, rings true.

Eltahawy writes that the book is not a cry to Western governments for help: It is not a plea that the West save oppressed women of Islam from their men. The book works best as a platform for various voices – including, bravely, Eltahawy’s own. It is helpful to have alternative views to the UN human rights reports on women in the Middle East, which, as Eltahawy notes, are often driven by ulterior motives.

Eltahawy clearly situates the need for a feminist revolution as the foundation for any kind of revolution at all. Until women are safe, until they have economic, educational and sexual freedom and equality, nothing will change, as she writes:

“Some may ask why I’m bringing this up now, when the Middle East and North Africa are in turmoil, when people are losing their lives by the thousands, when it can sometimes seem as though the revolutions that began in 2010 – incited not by the usual hatred of America and Israel, but by a common demand for freedom and dignity – have lost their way. After all, shouldn’t everyone receive basic rights first, before women demand special treatment? Also what does gender or, for that matter, sex, have to do with the Arab Spring? It should have everything to do with the revolution. This is our chance to dismantle an entire political and economic system that treats half of humanity like children at best. If not now, when?”

To her, misguided cultural sensitivity – the kind that views women’s subordination, their being nearly stripped of basic human rights, as a cultural issue over which the West has no say – has been enormously problematic for women in Muslim societies because it “ignored the courageous creativity of so many fighting against misogyny and male-dominated interpretations of my religion.”

Her book is an unending account of the atrocities perpetuated against women in the Arab world, from child marriages that occur as early as age eight in some countries, to honor killings and the inability of women to sue for divorce in nearly all of them; from “honor marriages” in which a convicted rapist is given the option to marry his victim to avoid legal penalty for his crime; to state-sanctioned wife-beatings by husbands; to state-sanctioned police sexual violence against women protesters. All this, of course, is a difficult read. But it is also a medium for Muslim women to recount their stories and offer alternative interpretations to their religion, based on the life and teachings of the prophet Mohammed.

Eltahawy writes that she penned “Headscarves and Hymens” after the overwhelming responses (both positive and negative) to her 2012 article, which put forth the claim that the most important revolution of the Arab Spring was a feminist revolution, and which demonstrated clearly the way women and their rights were grossly violated in the Arab world. The comments in response to that article, as well as the blog posts and editorials written following its publication, map out the ideological minefield that this book must navigate.

Critics of her article questioned its being written in English. If her main audience was Muslim women – and Eltahawy does claim that she is writing this book, in part, to encourage other Muslim women to speak for themselves, to own their voices – then why didn’t she write the article in Arabic? Indeed, why did Eltahawy publish it in Foreign Policy, an American magazine? This act, they suggest, presents Eltahawy’s world as “foreign.” Thus, its damning evidence feeds Islamaphobia in the West and betrays Eltahawy’s “liberal, Western-oriented worldview.”

Some critics group Eltahawy, Uganda-born Irshad Manji and Somali-born Ayaan Hirsi Ali in the role of “Muslim native informants.” Such a person is “honored and respected by white men and women to silence and shame Muslim women who critique these Muslim native informants.” Milder criticisms agree with Eltahawy’s assessment of the situation, and of her medium in criticizing it, but suggest that Eltahawy’s polarizing “they hate us” is both inaccurate and detrimental to her goals of eliminating the gross injustices and the violence against women in the Arab world. Rather, they suggest, it should be understood that sexism is also damaging and dehumanizing to men, who should be treated as allies, not as enemies.

Both supporters and detractors of Eltahawy have deployed the work of the Egyptian physician Mawal El Saad, who contends that “the root of the oppression of women lies in the global post-modern capitalist system, which is supported by religious fundamentalism.” Like Eltahawy, El Saad supports legislature banning veils in public. But her scope is broader than Eltahawy’s in “Headscarves and Hymens” because she is equally critical of the objectification of women and female bodies in Western patriarchal society, as well as the patriarchal societies of the Arab world.

Perhaps that is an unfair assessment, because Eltahawy’s book criticizes “purity balls” in Oklahoma as well as laws prohibiting women from driving in Saudi Arabia. It draws on the work of African-American “womanist” bell hooks and Gloria Anzaldua, a ground-breaking Chicana (American-born woman of Mexican heritage) poet and memoirist, as well as the Egyptian novelist Alifa Rifaat, to critique patriarchal and racist institutions in the West as well as the East.

I came away from “Headscarves and Hymens” feeling more fully informed about the specific policies and practices each of the Arab states had with such issues as female genital mutilation, divorce laws, domestic abuse and shelters (or the lack thereof), child marriage, rape, suffrage and others. I also came away with a deep respect for Mona Eltahawy for sharing her experiences, especially because they do rip and pull at the threads of the prefabricated vocabulary and ideological straightjackets that have confined Western reactions to women in the Arab world, and in the world in general. I appreciate the way Eltahawy has said “enough” to the age-old dilemma with which women have been presented: If you complain about your treatment, it will reflect badly on the men, and therefore on the culture.

This is a brave book. Read together with some of the other authors mentioned above, it provides access to a wider range of women’s voices sharing their experiences and gathering strength to act. Mona Eltahawy is not the voice of Egypt or Saudi Arabia, or of Arab women, but she is a voice, and we need hers and all the other voices, which we so rarely hear.

Marcela Sulak directs the Shaindy Rudoff Graduate Program in Creative Writing at Bar-Ilan University, and is a scholar of American literature, a poet and a translator.