Is Orthodox World Really To Blame for Faigy Mayer’s Suicide? 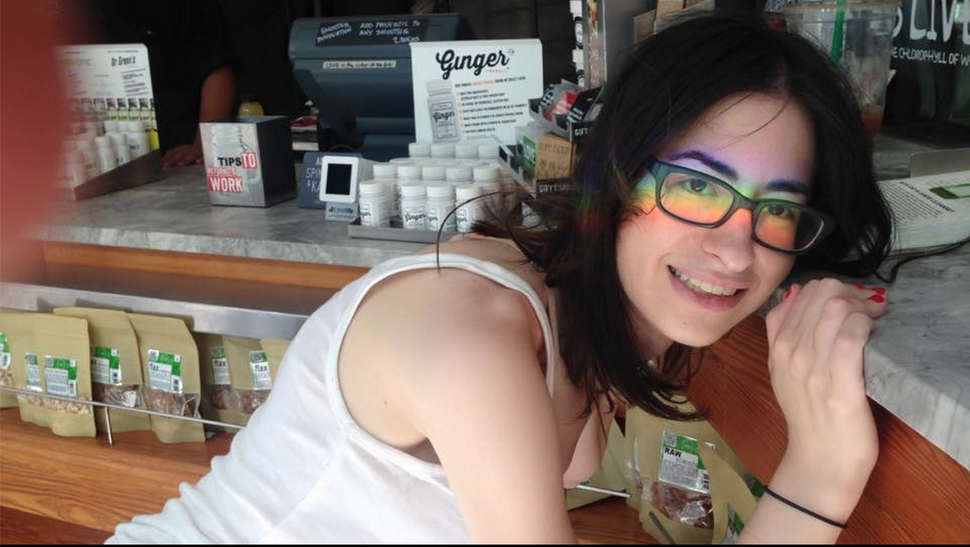 In bright pink paint, the words “Life is Beautiful” are splashed in graffiti on a wall in New York’s High Line, next to a young 30-year-old woman named Faigy Mayer brandishing a paint roller with a mischievous grin. The cover photo which illustrated countless tabloid news articles on Mayer’s death Tuesday, topped a Facebook timeline that was everything a busy young New York millennial from the world of start-ups and apps would post to social media – silly videos, a rainbow striped photo celebrating the gay marriage decision, pictures of nerdy fun at hackathons, the parade for the victorious U.S. women’s soccer team. On Twitter, Mayer described herself as a “Former hasid who codes in iOS. Love coding, beacons, bacon, the appleWatch and life!”

Little about this cheerful online persona pointed to the demons of bipolar disorder that would drive Mayer to committing suicide suddenly and dramatically by running, leaping and plunging to her death from a trendy Manhattan rooftop bar 20 stories off the ground.

Tabloids like the New York Post and the Daily Mail covered the story extensively, calling Mayer a “tortured soul” whose family had “shunned” her and reporting the chilling details. The New York Post related that just before she jumped, “her final words were to a bartender — whom she asked, ‘Where’s the east deck?’ a law-enforcement source said. The question was laden with symbolism. Jewish people pray in that direction, toward Jerusalem.”

Mayer’s suicide almost instantly triggered intense emotional online discussion, often degenerating into heated angry arguments on the underlying reasons for her tragic suicide. Mayer was a member of the tight-knit community of ex-Hasidic New York Jews affiliated with the non-profit organization Footsteps, who refer to themselves in shorthand as OTD or “off the derech” – a tongue in cheek reference to the way the ultra-Orthodox refer to those who “lose their way.” In a National Geographic 2009 documentary on ultra-Orthodoxy, Mayer was filmed at the group’s headquarters surfing the Internet, participating in a support group and speaking about the challenges of breaking away.

On the face of it, Mayer’s education and professional accomplishments six years after she made the break were impressive for a woman who had been a member of the strictly observant and cloistered Belz community until the age of 24. She had a university education and was the founder, CEO and iOS Developer of Appton, a startup specializing in mobile apps.

But her resume hid a darker story. Ari Mandel, another former Hasid and a friend of Mayers, said that in in the Footsteps community, “it was fairly well-known that she suffered from mental illness, she suffered from severe depression. But when we would see her, she was happy and upbeat, she would talk about her goals and dreams like everyone else – and then, every so often, we would hear that she was back in the hospital. It was a regular occurrence.”

Mandel believes that while there wasn’t necessarily a direct causal relationship between her depressive episodes and the way she was treated by her family, the stress of feeling isolated from family and community of origin had “exacerbated” it. Other friends attacked Mayer’s family much more vociferously in social media posts, blaming them for her death. Members of her family – including secular relatives – responded in comments that her choice to live a non-Orthodox life and her mental illness had coexisted, but that one had not necessarily caused the other and said that her family had done all they could to help her.

Mandel was among a group of Mayer’s friends who made their way to her funeral on Tuesday, prepared for the possibility of confrontation from her family. It is not uncommon he said, for families to bar non-Orthodox friends of the deceased, because they blame their loved one’s secular lifestyle for their death or “just because we are embarrassing to them.”

He said he was pleased when they were ultimately let in. “At first they were playing games, but I guess they realized after a while, we weren’t going to leave. I talked to both parents and I said ‘Look, I know we aren’t wearing long black coats and hats, but we aren’t here to make a scene, just to mourn our friend.’” In the Yiddish eulogy her father delivered, Mandel said, “he spoke well of his daughter.”

For Mandel and other members of the Footsteps community, the memory of another woman’s suicide was still fresh in their minds. Deb Tambor 33, killed herself with an overdose in October of 2013 after suffering depression and losing custody of her children who stayed in her former community of New Square. Her friends and her boyfriend and were barred from her funeral.

The conversations on social networks after Mayer’s death echoed those that took place after Tambor’s: debating the issues of cause and effect, and whether untreated mental illness – a stigma among ultra-Orthodox – may have been a reason they felt like outsiders in the Hasidic world and needed to leave.

There were other discussions as to whether being suddenly isolated, financially stressed and cut off from all close friends and family support – common results of leaving ultra-Orthodoxy – was a sufficient explanation in itself for triggering depression and suicidal thoughts and whether, as one article charged – “the whole Orthodox world is complicit in Faigy Mayer’s death” or as Rabbi Eliyahu Fink wrote on Facebook, “for too many people, suicide appears to be a better option than living a non-Orthodox life with all the pain, rejection, and demonization that often define the journey out. This is not acceptable. I think the Orthodox Jewish community needs to take ownership and responsibility for this social environment. It is an indictment of our lifestyle that leaving is harder than suicide.”

It’s true that in recently published OTD memoirs by members of Footsteps like Shulem Deen and Leah Vincent there is a running theme of isolation and despair resulting directly from their treatment at the hands of their family and former communities. Neither Deen nor Vincent – who attempted suicide at age 19 – describe any history of mental instability before they left the ultra-Orthodox fold, and yet both spent time as in-patients in mental health facilities after the process of leaving took a devastating toll. Deen wrote in his book “All Who Go Do Not Return” that he was hospitalized for a week after he “had fallen into a despair from which I could not see myself out,” following the realization that his children, who remained in their Hasidic community with his ex-wife, had been irrevocably turned against him. The pain was so great, he recalled, that “I yearned for some way to shut down my mind and was gripped with the increasing conviction that death was the only way to do so.”

Some say that the rush to judgement should not be quite so quick. Malky Wigder, who also left Hasidic life behind, but did not know Mayer, acknowledges that “there are definitely some really awful familial and communal shunning and even harassment and torture of OTDs. Some in my family hoped I would kill myself.”

And yet she says it not always appropriate to lay blame for suicide wholly on the families and the communities they left, just as it is equally unfair for the ultra-Orthodox to claim that the emptiness of secular life drove their OTD kin to take their own lives. There are often multiple factors at play; in Mayer’s case, the stress and instability of life in the world of start-ups certainly played a role. And, she adds, mental illness doesn’t discriminate.

“Yes, there’s depression and anxiety and PTSD among those who leave ultra-Orthodox life,” she said, “but is it more than in the general population? I don’t think so … Obviously someone with less resilience will have a harder time with the transition and with handling rejection. I think that’s very much an individual thing.”

It is a fair point that while there is a definite need for greater moral and material support for ex-Hasids – and greater protection of their parental rights by the courts – it must also be acknowledged that there are many men and women who successfully weather the difficulties of leaving, make the journey successfully and build stable lives, careers and families, albeit with deeply painful experiences along the way.

But these ‘normal lives’ aren’t the stuff newspaper headlines are made of, and it is the sad stories like that of Faigy Mayer that grab our attention and our hearts.

Is Orthodox World Really To Blame for Faigy Mayer’s Suicide?