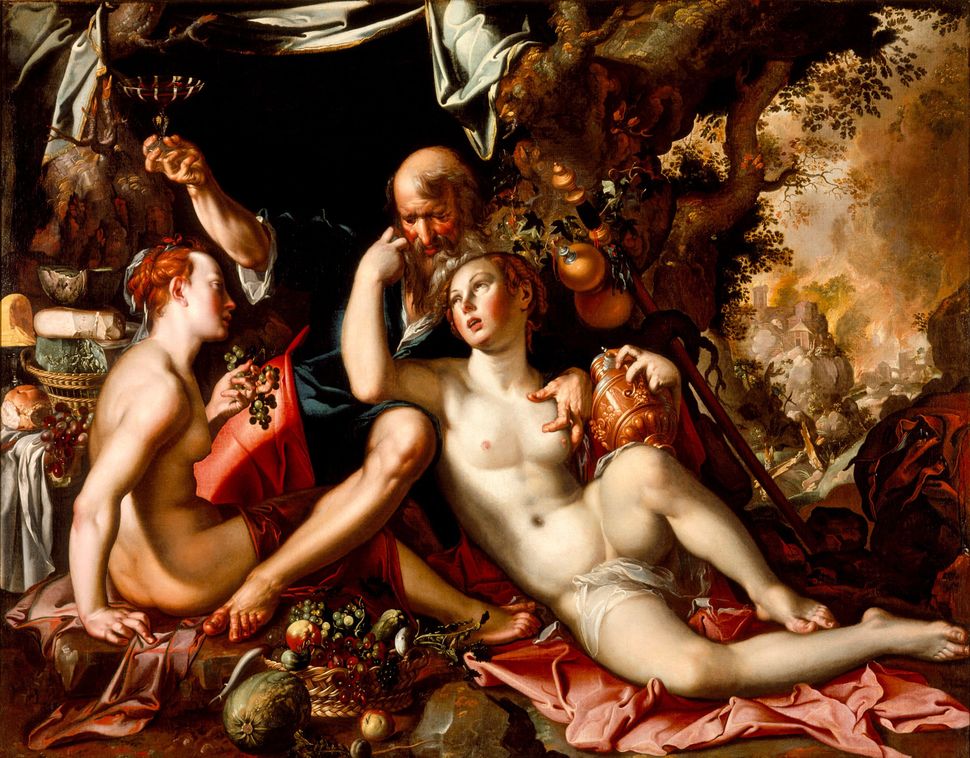 Before pornographic magazines and websites, there were religious and mythological paintings.

Two paintings of Vulcan’s exposure (pun intended) of Mars and Venus’ infidelity, which appear in the National Gallery of Art’s exhibit are “among the extremely rare 17th-century works in which copulation is explicitly and openly portrayed,” writes Liesbeth Helmus, curator of old master paintings, drawings, and sculpture at Utrecht’s Centraal Museum, in the exhibition catalog.

The three-room exhibit of works by the Utrecht-born Wtewael, a Calvinist who frequently depicted Old Testament scenes, comes as the artist’s star is rising. Wtewael, notes Arthur Wheelock, curator of northern baroque paintings at the National Gallery – was lesser known until recently, perhaps because only about 100 of his works exist, and as a successful businessman (selling flax and with Dutch East India Company shares), he didn’t need to sell his art. The exhibit is his first one-person U.S. show, according to press materials.

Walking through the National Gallery show, it’s clear that Wtewael loved the female nude. In addition to the graphic Venuses, the two biblical women in “Lot and His Daughters” (1597-1600) lie in the foreground of the painting, as Sodom and Gomorrah (which look decidedly Dutch in their architecture) burn in the distance on the ride side of the painting.

Lot’s wife, then a salt pillar, doesn’t seem to appear, but her two daughters are depicted mid-seduction of their father, having come to believe that they needed to commit incest to repopulate the whole world which had been destroyed. (“It’s all done for good reasons, as it were,” Wheelock says of the daughters.) The entire painting “imagines the episode as a bacchanalian feast, featuring abundant fruits, cheese, bread, wine, naked women, and costly tableware,” writes James Clifton, director of the Sarah Campbell Blaffer Foundation and curator of Renaissance and Baroque painting at the Museum of Fine Arts, Houston, in the catalog.

In his essay, Clifton refers to the “long tradition” among both Catholic and Protestant painters of depicting this obscure Old Testament scene, as the episode would have offered a cautionary tale for those who needed reminding about the dangers of excessive drinking. Lot lifts up a large wine glass in his right hand, as his left hand caresses his daughter’s left breast; he is fidgeting, one might say, while Sodom burns.

“Wtewael made Lot’s two daughters erotically alluring not only to their father, but also to the viewers, offering an exquisite profile of one daughter and a fully frontal view of the other,” Clifton writes.

Wtewael was active in the Dutch Reformed Church, and among the ecclesiastical positions he held were “dispenser of the poor box, deacon, and church warden of the Jacobikerk,” a Utrecht church, Helmus writes. So when Wtewael depicted “Judith with the Head of Holofernes” (c. 1595-1600), “Adam and Eve” (c. 1610), and “Moses Striking the Rock” (1624) which may include a portrait of Miriam in addition to Moses and Aaron, he would have surely had New Testament symbolism in mind. But, Wheelock adds, “The Old Testament stories were very important to him.”

He would have also, Wheelock says, likely have been thinking about the politics of the day in the Netherlands. “Moses led the Israelites through the wilderness. He got to see the promised land, but didn’t get there,” Wheelock says. “The leader of the Dutch revolt, William the Silent, led the Dutch through all their wilderness, and then he was assassinated. There’s an allegorical connections between Moses and William the Silent.”

A painting of Andromeda in the exhibit may also have presented a stand-in for the Spanish in the dragon from which Perseus must rescue the mythological princess, who would have represented the Dutch. “There could have been politics underlying a lot of these things,” Wheelock says.

Holofernes too may have been a tyrant symbolizing not only himself, but also the tyranny of any number of governors sent by the Spanish king, Clifton writes in the catalog. The depiction of the biblical woman (surprisingly clothed for Wtewael) holding the severed head of the Assyrian general “may have celebrated recent Dutch gains,” Clifton writes.

In the edenic work, Wtewael represents Eve reaching for an apple from the snake’s mouth as she hands the seated Adam a second apple. The two are surrounded by dogs, rabbits, a cat, goats, parrots, a camel, a horse, a bull, geese, rams, swans, a monkey, and other animals.

Although nude Adam and Eve paintings — or at least partly covered by fig leaves — aren’t rare, Wheelock notes that the artist takes the composition to a “whole new level of sensual engagement, merging Adam and Eve’s bodies into an interconnected form and thereby providing a sexual underpinning to the story.”

Wtewael didn’t shy away from the physical and sensual world, particularly in his depictions of women, but he also represented many of the women he painted in “quite heroic” poses, Wheelock says. Primary among those is “The Kitchen Maid” (c. 1620-25), who dominates the foreground of the painting, as Christ dines, in miniature, in the top right corner with Martha and Mary.

Jesus, who is supposed to be the story’s central character, is barely larger than either of the cucumbers in the foreground, and he seems to be an afterthought when compared to the other vegetables, game, fish, and bread that the maid prepares.

Whether the chickens skewered on a long metal plank foreshadow the crucifixion is up for grabs. What is clear, though, is that Wtewael wanted the maid to be front and center. “The ‘Kitchen Maid’ in particular moves things to a new level,” Wheelock says.