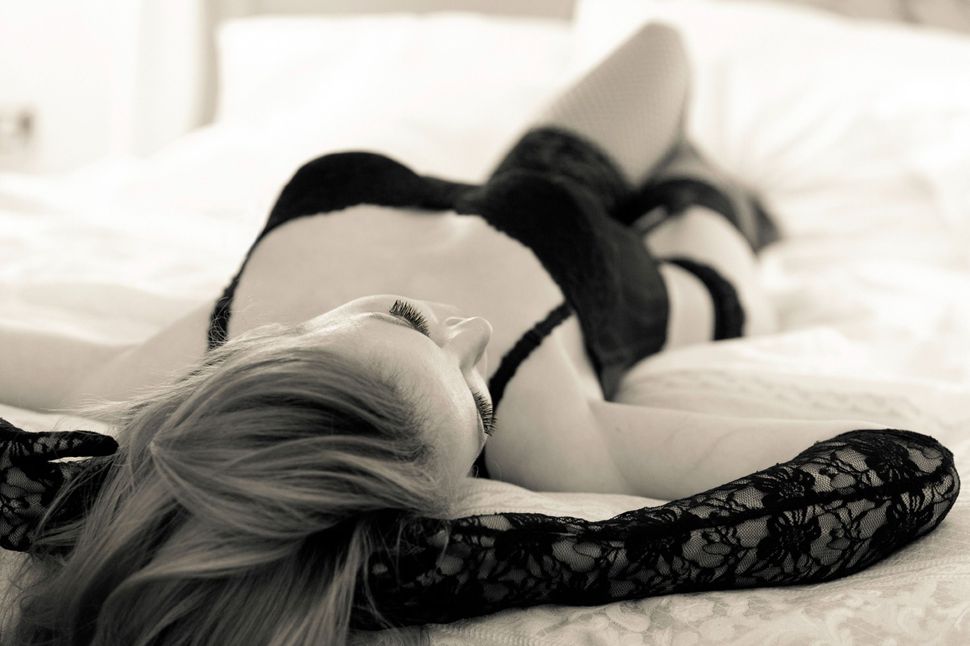 A recently published article in the Guardian, describes a new phenomenon of Orthodox women gifting photographs of themselves in lingerie to their husbands. A religious sex therapist said to me that this practice can help women feel more confident with their sexuality. These photos are probably no big deal — a photo from the article shows a woman looking back and one can see her facial profile and some shoulder. Not exactly hard core. However, it still doesn’t sit well with me. I see the sacredness of sexuality as emerging from the inside out, from a deep heart to heart connection.

A good test to be applied when thinking about the feminist implications of something for women is to ask “How would this fly if it was applied to men?” Can you imagine men getting their wives photos of themselves with their heads held to the side and some shoulder exposed? I don’t think so!

It’s a crazy thing how it is split along gender lines. I’m somehow trained to take what a man says and thinks seriously. Every now and again I look at a woman who is speaking intelligently, and am delighted to enjoy her mind, her deep thinking that involves her whole being and attention. And I am surprised that I have stopped objectifying her for long enough to pause from thinking about her clothes and body and face and actually listen to her. She is a thinking, feeling, serious being, someone with a voice. She is someone who matters, like all humans matter.

Just the other day, I hear someone say about a women “she’s a cute thing , isn’t she?” Thing. Who is a thing? And yet, sometimes it’s hard for me not to be a thing even in my own mind.

And it is also understandable that we objectify, ourselves and others. Dropping the objectification means that we need to experience ourselves from the inside — emotional and physical sensations — with all the richness and complexity that that brings.

I was exposed to pornography as a child and so I do have a particular sensitivity about it — and all things that feel like objectification. It is not about being prudish. And it is certainly not about me shying away from sex-positivity. To borrow a term from radical feminist theory, what is happening in these sultry photos is the “eroticisation of subordination,” meaning that there is something very specific that makes it “sexy” and that is related to woman as sexual object. I looked up the etymology of “boudoir.” It comes from “bouder” the French word for sulk. It started off as the name for the private space in which a woman would go to in order to sulk. It is hard for me not to compare this to the last time the Guardian wrote about Orthodox Jewish women, in relation to the ban on their driving. It was clear for all those with liberal values that such radical treatment as banning women from driving was an unacceptable limit to their freedom. The problem with the “eroticisation of subordination” is that it is the oppressive regime that many women have taken upon ourselves. We don’t need forces from the outside to oppress us because we have internalized them in our own heads. What do I mean by this? I don’t need someone else telling me that I am an object, and that my mind isn’t as important as my appearance, because I have already internalized it and will act accordingly. And not only that. It will be as if I want it for myself.

For me a partial antidote to the boudoir photography is to be found in a little known Talmudic story (Menachot 44a). In this story a man who is meticulous in following the commandment of tzizit or ritual fringes, comes for an appointment with a well-known prostitute. As he is climbing up into her elaborate bed to be next to her, his tzitzit hit him in the face and he comes down from the high bed and sits on the floor, naked. And the woman sits with him. They are sitting face-to-face on the ground, naked. He explains to her that the tzitzit were protecting him from sin, and she ultimately is so moved by his righteousness she marries him. What has always touched me about this story is the movement from being up high, ungrounded in the “I – It” encounter, to sitting naked on the ground together, facing each other, body to body, human to human, “I – Thou.”

This image sounds wholesome to me, vulnerable, exposed and full of love. God is in the picture. It is holy. The capacity we have for sexual intimacy and bliss is holy. Holy can be full of fire. It doesn’t have to be tame, but perhaps let’s keep it out of the boudoir?