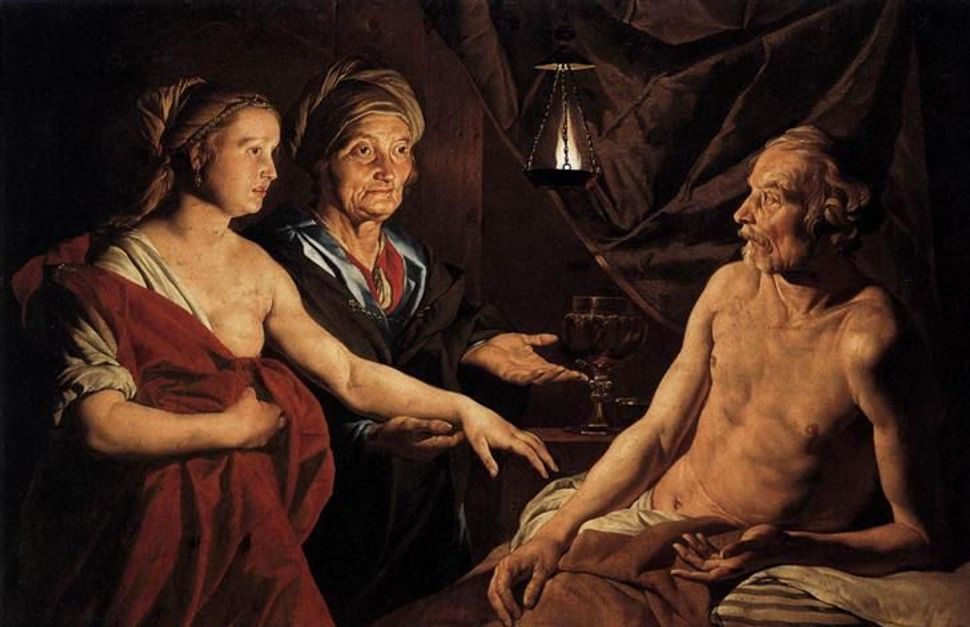 The Days of Awe are rich in opportunity for Jewish feminists who see themselves as activists for transformation, both personal and collective. It is striking, even ironic, that on the first day of Rosh Hashana we read the story of a catastrophic feminist failure. Sarah and Hagar are rival wives; one has what the other lacks. Instead of joining forces against a ruling patriarchy, they taunt and abuse one another in a power struggle whose unhealed consequences reverberate to this day.

When Sarah cannot conceive the promised heir, she encourages Abraham to lie with Hagar, her handmaiden. Once Hagar gives birth to Ishmael, she taunts her mistress Sarah for her unredeemed barrenness. Twice, Sarah exiles Hagar and Ishmael to the desert without concern for their survival. Despite a rabbinic tradition of apologetics (as in, “it was all meant-to-be, it’s part of a larger plan” ) neither of the two women emerges from the story untainted: Sarah is capricious and cruel, Hagar is bratty and lost. The reader is left to conclude that were it not for the Angel of God, left to the whims of two warring women, our historical destiny might never have unfolded.

The anthropologist-essayist, Ruth Behar, writes in the anthology, “Beginning Anew”: “If feminism is about the search for sisterhood, then the story of Sarah and Hagar is a foundational story about the impossibility of feminism. It is a story so sad, so shameful, so sorrowful, that to own up to it is to admit that feminism has its origins in a terrible lack of compassion between women.” Behar invokes Audre Lorde, an African American feminist who says, “…women who have the potential to bring each other into the world, also have the potential to oppress one another, to leave their heelprints upon each other’s faces.”

Why do we read the story of Sarah and Hagar on the first day of Rosh Hashanah? I presumed that the story was positioned as a prelude to the second day’s reading with its more central story of the binding of Isaac. But the Sarah-Hagar story was chosen first, on its own merits, back when we had only a one-day version of the holiday. It is the the binding of Isaac story that was added as a follow-up. How is the story of two rival wives a cornerstone of spiritual consciousness, refined and renewed?

Answers to that question abound, but none are entirely satisfying. An Orthodox woman teacher assures me that even if we are as lost and despairing at holiday time as was Hagar in the desert, God can still come to our aid. Behar, only slightly less predictable here, tells us that this story proves that feminist concerns were always key to Jewish spiritual development. A historically-literate friend persuasively suggests it was selected as a warning against intermarriage. Back to Behar, who adds that we read the problematic story because it sharpens our empathy for social justice. Finally, it does not let us shrink from the self-scrutiny that is the sine qua non of the Days of Awe.

I focus on the self-scrutiny component because I see myself in this story cast as the exiled Hagar. I returned from a 22-year sojourn in France identifying with the Egyptian princess origins that a midrash assigns to Hagar. I was an outsider, foreign to the ways of Jewish feminists, given to self-adornment, a flair for aesthetics, a fondness for the flirtatious and other suspect womanly arts. Like Hagar, I was called upon to compensate in family life for areas in which my more established “sisters” were not generative. There was too some competition for the love of a man. While, like Hagar, I did not fail in my role, providing some inspiration for a younger generation of women, also like Hagar, I lacked sensitivity to the fall-out of my intrusion. Inadvertently I incited jealousy and was made to suffer exclusion by the feminist powers that be.

This is the season when forgiveness is elevated to an indispensable virtue. Might we imagine Sarah petitioning Hagar for forgiveness for actions motivated by insecurity? Possibly, though no such overture is forthcoming in my life. Is there any way to imagine Hagar owning the part she too played in this rift by her exacerbation of Sarah’s vulnerability? I cannot slide over this sticky point. Yom Kippur approaches: These questions awaken my own stubborn difficulties in overcoming – and forgiving – the feminine rivalries in my own life.

I am tempted to end this writing right here – stuck as I am in my own unwillingness to forgive. As of now there is no easy way of moving forward. Nor is there trust. I do know that forgiveness is as much – and more – about liberating one’s self from an old story as it is about releasing another woman from blame. This year, I resolve to ask myself repeatedly why it is I cannot lay this story down. Or in Behar’s concluding words, how I might finally, for my own sake and the greater good, “emerge ready to lay Sarah and Hagar to rest in the same blood-ravaged land.”