Pulpit Plus One: Like Being the Rebbetzin, Only a Man 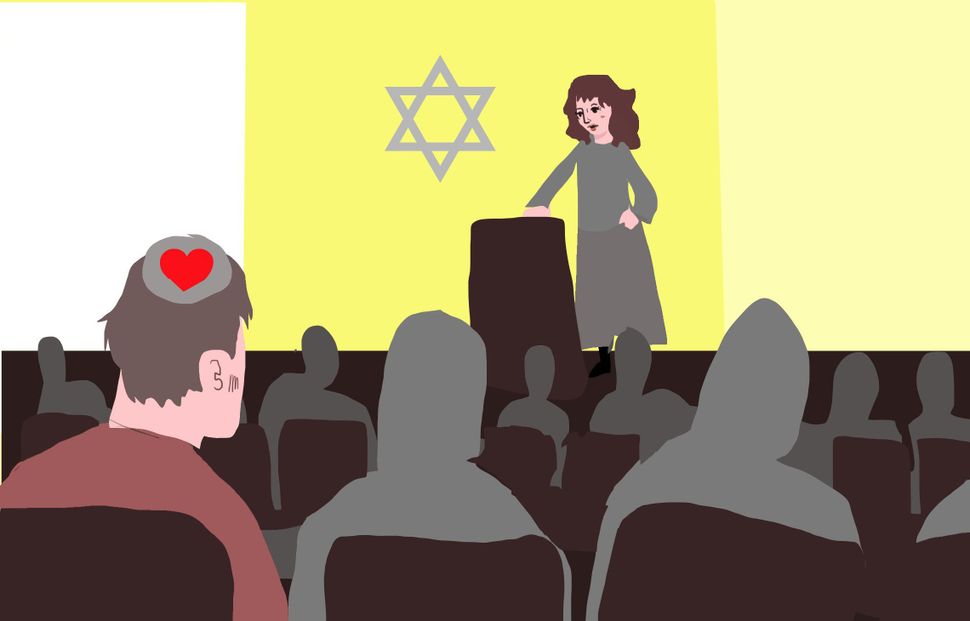 features the voices and experiences of the partners of pulpit rabbis. In this interview series, “Pulpit Plus One” takes an honest and lively look into the nuances of a complex role.

Gary is a writer in his early fifties who grew up secular Reform. He is married to Carrie, a Conservative rabbi at a mid-sized synagogue in California. They have three children between the ages of ten and fifteen.

Carrie was already well-established as a congregational rabbi when you two started dating. What was that like?

We had gone out a few times before I saw her in action as a rabbi. She says, “Do you want to come to a Friday night, see what it’s like?” And I said, okay, fine.

So I came to Friday night, I sat in the back, I tried to be very inconspicuous – but it didn’t work. At the end, this one member of the shul came right up to me, looked me in the eye, and said: “What are your intentions?”

How did you respond?

[laughs] I was a little taken aback! And then I remember, there was another time – a congregant who was female was hitting on me a little bit. And then someone must have told her (it wasn’t that much of a secret) [that I was dating the rabbi], and she was like “Oh my god!!”

Did you ever imagine that you would marry a rabbi?

If you told me a week before I met my wife that I was going to marry a rabbi, I would have said “That’s crazy! I’m just not that interested in religion.”

One interesting thing, and it came up very early because she keeps kosher: it came up that if we have kids, they’re going to go to day school. And honestly, I had never thought about it one way or the other.

I [also] thought that kashrut was going to be a big problem in the relationship. It is a challenge, but I said that’s a silly thing to break the relationship over. It’s a lifestyle issue that takes some mindfulness. I certainly have my own issues with all of that still, but our kids are growing up as kosher kids.

And the kids going to day school? I thought, well, it’s not going to hurt ‘em.

After you were married, when your wife was looking for a different pulpit, what was the interview process like for you?

It wasn’t that different from being the rebbetzin [“rabbi’s wife”, used non-literally] at our home shul. You put on a nice, smiling face, and you say wonderful things about your spouse. You try and show a sincere interest in the community you’re visiting, ask pointed questions, and try not to be too controversial.

So I was polite and tried not to over-insert myself. I was there to help shlep my wife’s stuff around.

How would you describe the community you are in now – your wife’s current pulpit?

Our congregation – we’re less formal, open to more experimentation, and progressive looking at the liturgy… which is my wife! Which is why it’s a match, why we liked them and they liked her.

When you arrived in this community, were there any implicitly or explicitly stated expectations of your role?

No. Anything that I’ve done has come from my own sense of what I can do to help, or what my wife has asked me if I might help participate in, or what have you.

I’m the shofar blower and I teach a couple times a year. Other than that, I’m a shlepper, I help out around the shul with stuff that needs moving around. I built a bookshelf [laughs]. But as the rebbetzin, nothing specific.

Regarding the role: how have you felt going into it, and how have your feelings changed over the years?

I remember at one point (this was before we were married), we were visiting a friend of Carrie’s in Boston who was a rabbi. And her husband was coming home, and he had been davening [praying] at a different shul – not his wife’s shul.

I thought, “Oh my god, that’s terrible! How does he go to another shul? That’s so unsupportive!” …Years later, now I totally get it.

What do you understand about it now?

He wanted a community where he could just be a member. Where he didn’t have this special status as the rebbetzin. And I totally get that! I think our congregation is wonderful, I like the people very much, but I’m not there because I joined as a member.

When I walk in the building, I know that I’m the rabbi’s spouse. I know a lot more about what’s going on in the shul than a lot of [congregants]. That’s a privilege and a responsibility, but there are definitely times where I crave that status of being a member somewhere, meeting people on that equal basis.

So at the time, we were [in Boston], and I didn’t get that. And now I understand. I’m not running out to join a different shul myself [laughs] – but I understand the urge to do it.

Do you feel like you’re “on” all the time?

Any time I’m around congregants, I’m on. We have members over for Shabbat lunch or dinner on a fairly regular basis. And it’s nice – I like having people over, and they’re nice people. But I’m under no illusion: I can’t have frank conversations about the synagogue. You know? It’s not appropriate.

It’s not my place as the rebbetzin to bring up issues or complaints, or tell them how I think it should be done. I’m not the rabbi, and I’m not a member, per se. So in that way I say less than I would if I were a member.

If you’re comfortable sharing: how has this role affected your relationship with your partner?

She’s the only wife I ever had, so I can’t compare it to any other marriage [laughs] – but, sure. It’s challenging. I’m usually on with the kids and she’s not. And she’s tired. It’s a demanding job and there’s not a lot of free time, there’s not a lot of downtime. And people die, people are in the hospital – you can’t predict a plan.

We try to plan a vacation every year for a week or so after High Holidays. We go away. I found that cruises are good because, you know, no cell phones and no internet, and [you’re] unlikely to find somebody you’re going to bump into.

And you talked about this a little at the beginning: what effect has this role had on your own Jewish identity or observance?

But that’s all an adjustment for me, and when I’m on my own, not with the kids, I do whatever I want. If just the two of us are going out to dinner, I may order non-kosher food. I’m not going to have bacon-wrapped shrimp and hold it up in front of her and say “ha ha ha”, but I also try not to censor being how I want to be.

I know you’re familiar with the term “rebbetzin” because you’ve used it. But I’m curious: how do you feel about that title in general? Or other ones, like “hubbitzin”, “rebbetzman”, “rebbetzer”?

I think all of that is ridiculous. I mean, look, I know the gender issue is it’s a woman – but I don’t care. “Rebbetzin” is a convenient, appropriate term.

People say: “What do you call a rabbi’s husband?”, [and] the old joke is: “Lucky!” So I’m fine with it, and I think making up some silly new term is just, you know, sort of vanity.

Pulpit Plus One: Like Being the Rebbetzin, Only a Man