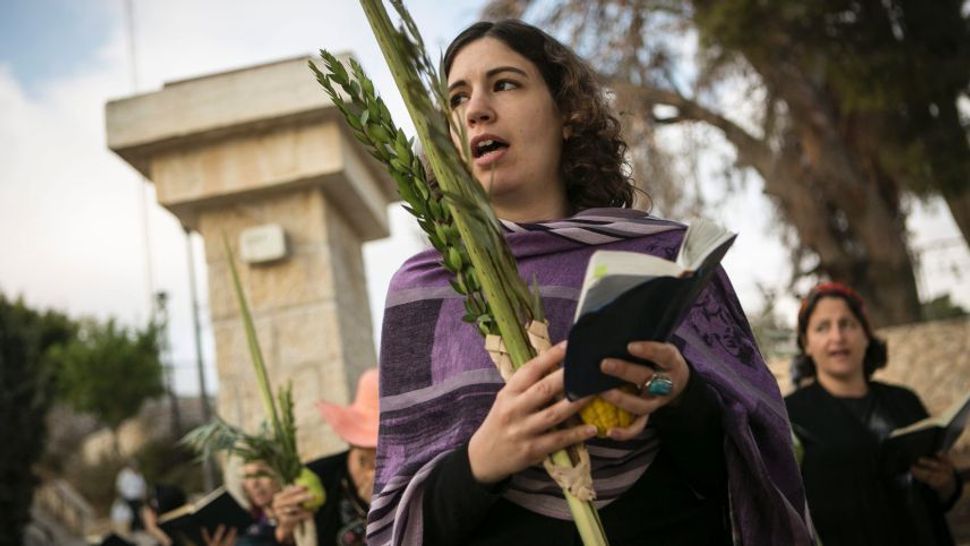 Nobody intentionally set out to make Sukkot and Simchat Torah feminist holidays.  Yet, slowly but surely, these two Jewish festivals have evolved into a time of year when the envelope is pushed when it comes to women’s participation, even in Orthodox communities in which egalitarian practice isn’t easily accepted.   Over the past four years, the changes picked up speed in Israel and the Diaspora as the awareness of the phenomenon of “exclusion of women” has heightened, inspiring many to push back against it at this time of year. On Sukkot, more and more women are buying and using Sukkot objects like the lulav and etrog, and helping to build and spending time in the Sukkah. On Simchat Torah reading from and celebratory dancing with the Torah on the holiday that celebrates the sacred scroll, and reading from it has become something that even women in very traditional communities are not willing to forgo.

This change has spurred a spirit of innovation.  Want to buy Simchat Torah flags that show pictures of adult women dancing and celebrating with the Torah together with their families? Since 2012, the Israeli Masorti movement has been producing and marketing thousands of such flags and selling them with great success, offering an alternative to the traditional flags produced by Israeli manufacturers limited to images of men and young children for fear of offending ultra-Orthodox sensibilities. Feel the need to symbolically welcome the legacies of great learned women into your sukkah as guests in addition to the usual array of the male bearded rabbis? Thanks to the Jewish Orthodox Feminist Alliance, there are now posters of learned women to hang up in the Sukkah alongside the men, after a Kickstarter program last year proved that there was enough demand to sustain their manufacture as well.

Historically, notes feminist scholar and former JOFA executive director Dr. Elana Sztokman, Simchat Torah, together with Purim were the two holidays that the early women’s tefilla movement in the 1990’s latched onto because these were considered exceptional times of the year, and it was easier to convince women that it would be acceptable to read from the Megilla and the Torah. Simchat Torah became the most influential of the two, she says, because “I think that reading from the Torah has been the most impassioned area of empowerment for Orthodox women.”

Sztokman’s major step on her personal feminist journey took place the first time she read from the Torah on Simchat Torah. “It was an entry drug, those Torah readings … My father was a Torah reader and a chazan, so for me, reading from the Torah was the pinnacle of participation. Once you learn to read Torah, you never look at the text the same way again … Reading from the Torah gives you a real connection. It altered everything for me – it changed my relationship to being Jewish – you are standing at the center, you own the tradition and the heritage. You can’t go back.”

Rabba Melanie Landau, a graduate of Yeshiva Maharat believes that one reason women are introducing change on these holidays is that both Sukkot and Simchat Torah are “democratizing” festivals – where the doors are open to all. It is a time “ where you find a dynamic of freedom and exceptionality” and “any opportunity that opens things up is a powerful opportunity for change.”

In addition, she says, the fun factor plays a major role. Following the serious and somber contemplation of Rosh Hashana and Yom Kippur – the hands-on pleasures of Sukkot and the exhilarating celebration of the Torah on Simchat Torah, are about pure unfettered joy. And everyone – male and female – wants to be part of that.

Also, Sztokman asserts that ironically, change often happens when sexism and strict gender roles are so obvious they force women to pay attention to them – and that is the first step to change.

“On Simchat Torah, when you go to a synagogue and you see men being wildly active and involved with the Torah, dancing with the Torah and enjoying it – and you look at the women sitting around gossiping and utterly disconnected from what is happening, the contrast is too huge to ignore. That spurs change.”

Indeed, as Sukkot approaches, Internet forums for Orthodox women buzz as participants compare notes as to which synagogues welcome women dancing and reading on Simchat Torah, and which ones forbid it, and many attend a different synagogue than they normally do on Shabbat in order to participate in festivities. On one, a woman posted that she was disgusted that after women in her community put pressure on the rabbi on the synagogue, he agreed to “allow” them to handle a Torah, but only if they were married and fully covered their heads – and were dressed in non-cleavage-revealing shirts with long sleeves and  long skirts, while no such detailed requirements were in place for men to dance with the Torah. Other women said she should consider herself lucky – they reported that, after being told by their synagogue that they could not dance with a Torah because some members were “uncomfortable” with the concept – they had decided to dance independently with a Torah they had acquired themselves in a park.

Beyond the Orthodox community – in secular Israel – the burgeoning spirit of egalitarian participation in these holidays isn’t merely symbolic, but very real and public. For three years, in the the Tel Aviv Port, where a giant sukkah has been erected by the Beit Tefilah Israeli community. Beit Tefilah is internationally renowned for their popular Shabbat singing services at the Tel Aviv Port. The massive Sukkah they create seats 500 people, and it is very different than the typical public municipal sukkahs that usually stand in city centers in Israel which have a traditional Orthdox orientation and are often sponsored by organizations like Chabad.

Inside the Tel Aviv port sukkah, daily egalitarian musical holiday prayer services with full participation by both genders is held, along with other activities – stories and arts and crafts for children, Israeli dance, yoga, lectures and films, and a one day conference of Jewish learning bringing together all of the Jewish renewal organizations in Israel.  At the port, both men and women fully participate in the Sukkah rituals, as they do in the Simchat Torah celebrations that follow dancing with and around the Torah in what is known as “hakafot.”

“I noticed when we first started doing the hakafot in the port, that the Torah kept moving from male to male, even though we had no mechitza, no barrier between men and women – even secular people had this paradigm in the back of their minds – that it should be men holding it,” says Rani Jaeger chairman and co-founder of Beit Tefilah Israeli. “So last year I started grabbing the Torah and giving it to women. I made a point of giving it to older, even elderly women who I knew had probably never touched a Torah – and they loved it and never let it go.”

Jaeger points out that because the massive sukkah at the port is a “kosher” sukkah, meeting the physical requirements for observant Jews, over the course of the holiday it draws all kinds of visitors and Orthodox and ultra-Orthodox in the area use it for eating and praying, despite the fact that it was not built by Orthodox Jews. “This offers an opportunity for interesting dialogue that rarely happens. I mean, how often do you get ultra-Orthodox in a Reform synagogue, right? While they aren’t joining in our service, they do their own thing, they definitely watching and learning – they open our prayer books and ask questions.”  He believes Sukkot it is the appropriate time for such interaction,  “The spirit of Sukkot is all about welcoming, opening up. Sukkot is a happy moment in Judaism and one that calls for a breaking of barriers between people. Sukkot is a holiday that lends itself to change and innovation. You can also see it on Purim, but in a different way. Purim is a holiday when you are breaking everything down just for the sake of doing it – you are turning everything upside down just for fun. But on Simchat Torah, you are expanding the borders of practice and you do it for the sake of something that is more meaningful. You expand them for Torah.”