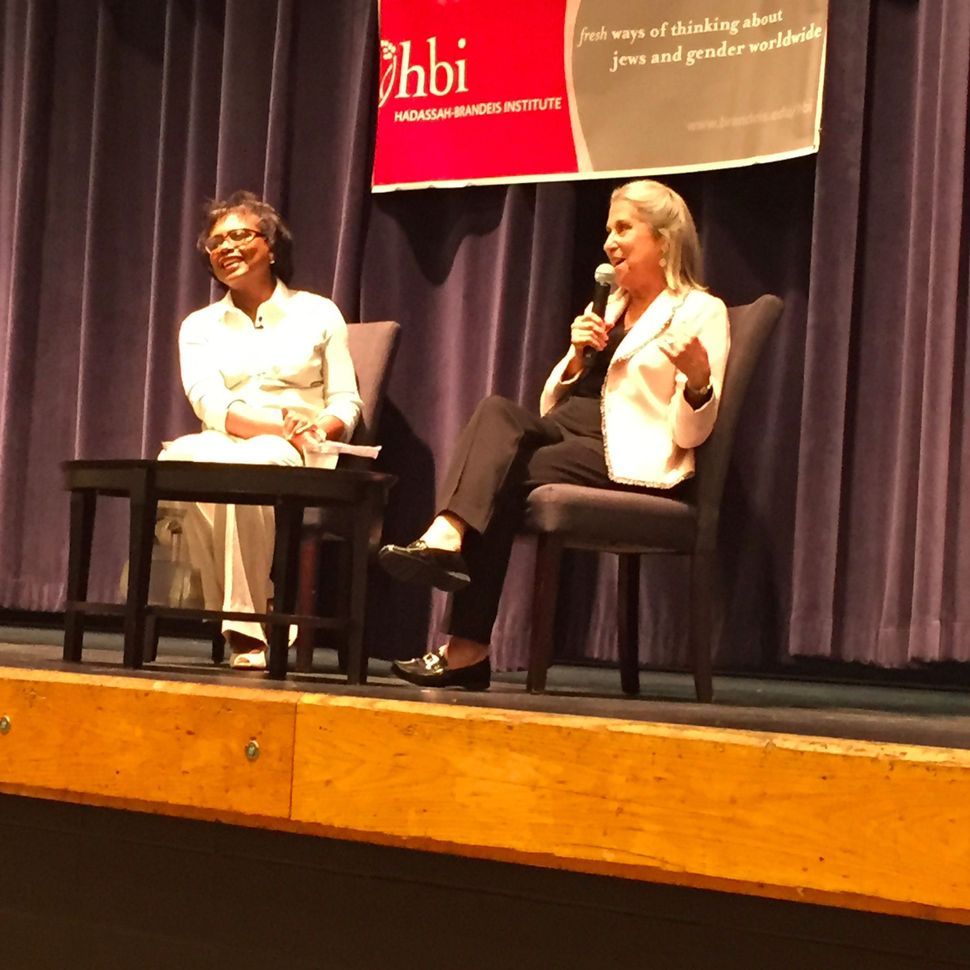 It should have been an exciting night. Anita Hill and Letty Cottin Pogrebin were scheduled to be in conversation about “Faith, Feminism, Race and the Ties that Bind” under the auspices of the Hadassah-Brandeis Institute and Interfaithfamily.com. But the two women sat in armchairs on the stage of the Levin Theater in Brandeis University’s student center earlier this month, lecturing the audience of 150 or so mostly middle-aged women about feminist history, rather than engaging in the deep conversation I expected to hear.

Anita Hill became a feminist icon in 1991 when she accused United States Supreme Court nominee Clarence Thomas of sexual harassment. In the intervening years she has settled into a professorship at Brandeis University where she is the school’s professor of Social Policy, Law and Women’s studies. She also has appointments in the Heller School for Social Policy and Management and in the Women’s Gender and Sexuality program.

Letty Cottin Pogrebin has feminist bona fides that include her role as co-founder of Ms. Magazine. The author of 11 books, her latest novel, “Single Jewish Man Seeking Soul Mate” served as a springboard for discussion. The book’s protagonist is the son of Jewish Holocaust survivors who promises his mother he will marry a Jew and raise Jewish children. Instead he falls in love with a radical African-American feminist, the daughter of a Baptist minister and a civil rights activist mother.

Pogrebin noted that the book’s premise was inspired by her daughter who fell in love with a devout Catholic two decades ago. “I was sideswiped by my own reaction,” Pogrebrin said. “I think of myself as an open-minded person, but on this issue I was a Jewish absolutist who wanted Jewish grandchildren. But I also told my daughter, ‘I can’t lose you over this. I will learn to love him.’”

Pogrebin saw her dilemma as part of the “old school” fear of intermarriage. Hill asserted that the promise to marry within the fold pointed to the overarching issue in the book. “At its core,” she said, “what do we owe our parents in maintaining their heritage, culture and religion?”

It didn’t take the women long to make the leap from the topic of familial duty to the attendant issues of contemporary feminism. However, what surprised me was how fiercely Pogrebin, and to some degree Hill, was out of touch with the contemporary feminist agenda. “This is a generation,” Pogrebin declared, “that defines issues I feel are retrograde. [They see] piercing their navels as a statement of freedom and equality.” Rather than simply criticize, I had hoped the women would examine, for example, the millennial reluctance to label themselves as feminists and what that means going forward for women in general.

Towards the end, the conversation became more accessible, more heartfelt. Hill shifted away from her professorial stance. Pogrebin left behind her nostalgia for first wave feminism and disdain for the lipstick feminism of younger feminists. The women told stories about the price of silence. Hill’s uncle told her about the time her grandparents were forced to leave rural Arkansas after her grandfather was threatened with lynching. “After he told me,” Hill noted, “my uncle said you’re not going to use this in your book. They might use it against you. The fear and the terror were still with him. What do our parents owe us in terms of telling us about our heritage and maintaining our history? The Black Lives Matter movement tells stories that are startling to their elders.”

As a second-generation Holocaust survivor, Pogrebin experienced a similar silence and saw the same kind of fear in her family. “Holocaust households often didn’t get answers. For us there was nothing romantic about [a trip] to Europe. The specifics about the Holocaust were not mentioned or discussed. We absorbed the fear. The thought was that if we don’t talk about it; it won’t happen again.”

And at the end of the evening, Pogrebin gave a nod to Interfaithfamily.com’s mission with a plea for Jewish continuity. “If we want our grandchildren to be Jewish we must make Judaism meaningful.” How do we do that? “Dig deep into texts, be willing to engage with the negativity of some of the [bible] stories. We need children perpetuating Judaism.”

To their credit, the women left their audience with a burning question: Where is the next feminist movement? Pogrebin saw choice as the next challenge for women of all cultures and backgrounds. “You can’t be shackled to biology if it doesn’t fit your life plan. If you’re not free in your own skin, you’re not free in your own country.” Hill was concerned with the history of sexism, bias and misogyny that is built into the workplace, housing and educational system. “People of good will getting along, she noted, cannot eradicate these issues. We have to examine our institutions.”

The reality is that women have been divided over feminism since the Suffragettes, which makes conversations about the future of feminism all the more imperative. It felt to me like a wasted opportunity not to have prominent feminists like Hill and Pogrebin directly address that topic. Perhaps it’s time to place a third chair on the stage for a millennial feminist also to engage in that conversation.