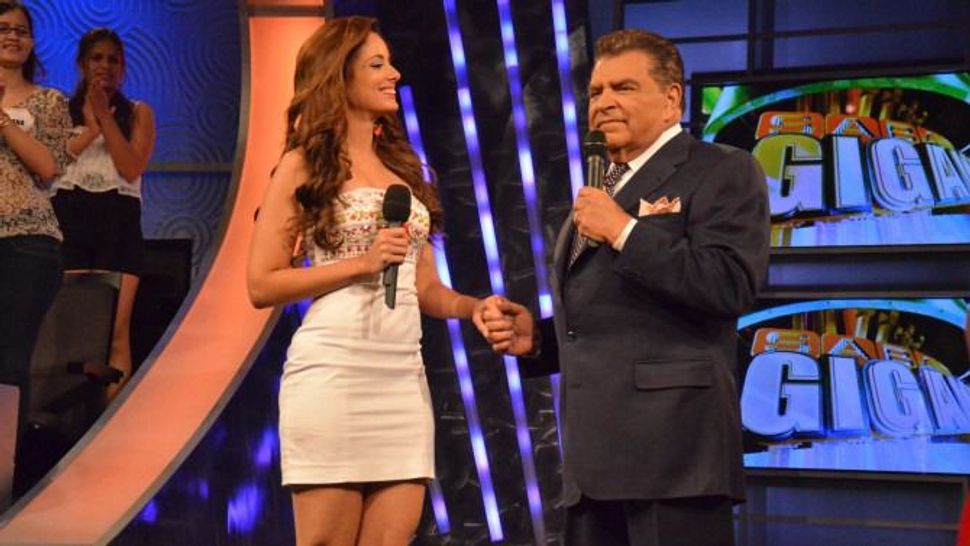 I want to say how Don Francisco makes me feel, but as I sit down to write I am also getting over it. Oh, get over it, I hear a man say, it’s not that big of a deal, I hear a man saying, you used to be cool with this.

Fear: I’m scared of Don Francisco. Even though he’s on TV, and I am watching with my father and I am safe. I feel worried Don Francisco wants to peek down my shirt, over my shoulder, or under me in some way that I don’t want him too.

But at the same time he’s safe. He’s in a suit. He’s in a TV. This is his shtick, my father says, protective, calm. I’ve seen his shtick many times. Safe: the safest kind of creepy. And so I am fine with it. Don Francisco stays inside the TV and I am safe.

I can’t remember when Don Francisco first came into my life, but it was definitely through the bam bam thud clicking knobs of the old TV we had when I was a kid. Bam bam thud, a hiss, and then the boom of Sabadooooooooooooo Gigante would come pouring through the screen, filling everything. And then spinning dance lights, jumpy music my mother would call “tacky” and roll her eyes over at. She would read a book while we watched, sulky behind us on the couch or go somewhere else in the house, escape it.

But I was allowed to watch the show with my father. I liked to be in the secret of what was okay with my father. Later, my mother would say it was okay, approve of it as “cultural education,” only look on disapprovingly at the jiggling women in thong bikinis as my father and I settled into an armchair. My father would examine first Don Francisco and then me, quizzical and certain: But do you know he’s Jewish?

That’s what she said is okay sometimes. I like to play. I like to play and hear sex spill over into everything, be fatty and full around us. I like it better now that J has started saying that’s what they said, cutting out the gender. But it makes it flat and sanitized, too.

A few years ago you loved saying that’s what she said, a man flings at me casually, and it’s true.

I loved dancing up in their lights.

We would go to Mexico in the summer and be our Mexican parts. We would visit the S’s, a family my father had grown up with in Mexico City. We would hang by their stone-surrounded pool in Cuernavaca. I remember my small feet flapping against the compact stone around the pool, blue and white tiles pressed into the concrete, clinking down my perfect glass of virgin piña colada and being shocked when it didn’t shatter immediately against the cool concrete. My Mexican parts behaving well, my soft body flinging well against the summer.

It was mostly stable and quiet there. Meals always came at the same time. I didn’t have to know much. Sticky slats of the pool chairs clinging to my legs, turning into the sun, setting my face in the bougainvillea as my mom sunscreened my back.

My mom had finished with me and we had moved on. We were making sure everyone had sunscreen on. We got this. I laid back and watched my father slather across my mom’s back and slide one of her bathing suit straps just down her shoulder to be diligent in covering her, to get the freckly underneath parts.

Over my father’s shoulder I saw M, the patriarch of the S family, smile up at my mother with eyebrows raised. How about you lower that strap just a liiiiitle bit further, señora? He winked, and looked over the whole of mom. I watched mom’s back tense and pull into itself. I watched my mom’s face go blank. I knew she’d storm about it later. In the meantime we laughed.

“Sabado Gigante” closed up its last show last month, and a few weeks before the last show Don Francisco (his real name: Mario Kreutzberger) had a on NPR’s On the Media. Driving home along Highway 1 in California, I recognized his voice right away. First I heard my uncle’s, then I heard my other uncle’s, then I tensed right up. My hand over the dial – did I want to listen? Could I hear Don Francisco without my father?

Kreutzberger is so good at answering questions. He was so good at answering Brooke Gladstone’s questions. I coasted along with him, his perfect imitation of a Jewish accent in Spanish, his patient childhood stories (bullied, then fighting and winning). Gladstone asked him about the sexist reputation of the show. He could control his voice so well, it reminded me of M, in control, his eyes on my mother, stilled and certain. My father had begged my mother for patience, patience with the leering, the jokes. I always overheard them.

Kreutzberger requested gently, too, gently asking that Gladstone put “Sabado Gigante” in a cultural context. “Maybe it’s not so aggressive for us,” he said, “I’m not trying to do something aggressive. We believe in the beauty of women.”

A highly educated and extensive reader, the main thing left in my father’s speech that makes it clear he’s operating in his third language in English is word choice. He’ll often pick words that – while they make total sense in the sentence – are simply not in common usage in that context. Erudite, inextricable, perilous. So literary in a totally accidental way.

Aggressive. Something unleashed and leashed. Not trying. So quickly I feel myself forgive Don Francisco because he’s not trying. Or I forgive him for not trying, I forgive him because of his word choice. Suddenly there is space for me to move on.

Kreutzberger accent reminds me so much of my family, my uncles – I always think of my uncles because there are four of them, four brothers and their mother left. Their accents, all of them: maybe the residue of Hebrew and Spanish in their third language of English.

But do you know he’s Jewish? Or, it’s okay because he’s one of us. How could he be one of us. Is he one of me? Or just my uncles? I see an endless line of uncles making a gross joke and then bowing, moving off stage. After enough of them I get over and see only the bows.

When you grow up does it get more clear – who is one of us? Who is with me and against me? Do you stop measuring this some?

I ask my father if he thinks Don Francisco is not sexist in context. Please – that’s an excuse, he says, he can’t blame it on the culture. Those cultures are changing, too, and they are less sexist than they than used to be.

Are they? Maybe parts of them. Maybe some uncles. It’s hard for me to imagine there isn’t a pre-teen somewhere in Cuernavaca, watching as an older family friend leers at her mother. Call it belief in the beauty of women, but somewhere someone is teaching a girl that she is for looking at.

That’s not happening just in Mexico, though, not just on Latino TV. I listen to Kreutzberger shoot Latinos in the foot, say it’s their “the culture.” I am desperate to turn away from this, desperate not to blame objectification on some non-existant pan-Latino culture. Especially not in the days of Donald Trump calling Mexican immigrants “rapists.”

I am cool with it to keep all Mexicans from being called rapists.

I am cool with it so that not everyone has to be evil. So that Kreutzberger doesn’t have to be evil.

I am cool with it because I am protecting something.

Saying goodbye to “Sabado Gigante” brings up the taste of mangos sprinkled with salt and chili, a tension in my shoulders as my body curls over to hide itself, the dark cushions of a sofa in our TV room in Massachusetts, the anxious snapping of swimsuit straps across my back and collarbones. My body slivers off into parts and returns to me.

I stitch together the parts and wait to feel angry at one of them. I try to be angry at only one of them at a time. This is how to stay sane.

I get over it and then I don’t. I remember my mom and the bathing suit and she doesn’t remember. It seems to matter less, matter only when my body is cringing and I want to understand.

I watch it outside, watch the parts. I’m grateful in some ways to Kreutzberger for playing the character he thought we needed because it stitches together uncertainly. Kreutzberger got to be all the parts: an award-winning interviewer, a voice from the audience judging women’s asses, Chilean, Jewish, more.

I got to be scared and also cool with it, got to be Mexican at home in the Boston suburbs with my father and his faint accent. I am protected by being all the parts, stitched together in my skin, cool with it and angry, never knowing which will rise to the surface, ready in this skin for both.