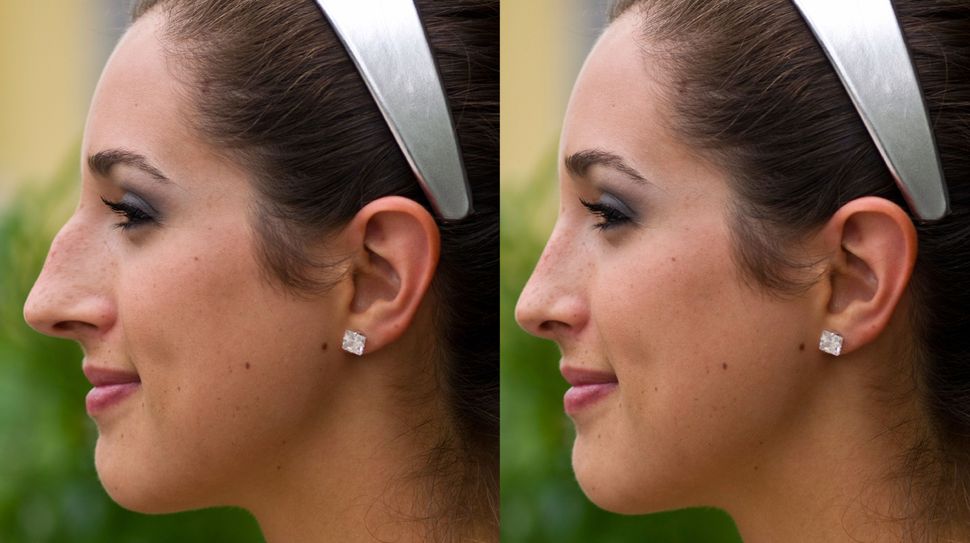 As if growing up a digit away from the 90210 wasn’t enough to school me in beauty standards, my mother had already undergone two nose jobs by the time I was six.

Mom says her original nose had a bump and the tip was crooked. When a doctor said she had a deviated septum, she opted for cosmetic reconstruction, as well. But nose job number one failed to remedy her qualms, and she went under the knife once again.

“Three years later I had changed my hair color [from brunette] to blonde, my eyes were beginning to bag and I decided my nose just did not fit anymore. This time, instead of shaving the bump, the surgeon broke the bone and straightened it out,” she tells me today. “The nose does not look bad — it’s pretty — but my look was changed entirely. And I sometimes wish I never touched it in the first place.”

In her , Naomi Zeveloff discusses how daughters of nose job recipients may be less likely to desire a nose job, themselves. In my case it’s true.

If there’s such a thing as a “Jewish look” (genetics and stereotypes aside), I have it and Mom doesn’t anymore. Whereas once I considered permanently straightening my curls or wondered if my nose would grow to be “too big,” I haven’t only come to terms with looking ethnic, but appreciate it. Bearing resemblance to my siblings, grandparents, and even other Jews makes me feel part of something greater than myself.

But with that said, my decision to keep my look as nature intended may categorically separate me from many fellow women from Los Angeles, including a handful of friends from high school.

Mom says her nose jobs made her not only look less Jewish, but also less “exotic.” Now she says she looks “more American and more LA.”

“I had moved to LA from New York just three years before the first nose job and so I was already out of my element,” says Mom. “I don’t know what I might have done if I never moved. New York is more cosmopolitan and forgiving than LA. I never felt as pretty in LA.”

It’s no surprise that the culture in Los Angeles supports plastic surgery. “Los Angeles is the center of the entertainment industry which is obsessed with appearances,” says a high school friend who got a nose job at 18. “Additionally, West LA where I’m from has a very large affluent Jewish population which means people have the money to fix their imperfections. It’s the same reason so many people in LA are so skinny,” she says. “Once you notice an imperfection, it’s often all you can focus on. Post surgery, I felt more comfortable with myself, especially in pictures.”

The classic image of beauty, which is perhaps all too common in Los Angeles, embodies a “small, perfect nose,” says my friend. “People, especially women, hoping to get closer to that ‘perfect’ image want to change their appearance to closer mimic it.” She is one of many Jewish childhood peers from Los Angeles who have now undergone rhinoplasty, many for similar reasons. “If I felt my nose was the ‘norm,’ and beautiful on other people I probably would not have cosmetically changed my own,” she says.

Beverly Hills plastic surgeon Dr. McCoy Moretz says that nose jobs are common everywhere, not only in Los Angeles. “LA has a much more apparent focus on beauty than a lot of other places,” he says. But the image of beauty, itself is always changing.

In the 1960s and 70s, the “twiggy, pixie, Tinker Bell little nose” was popular, says Moretz. Now rhinoplasty has developed toward a stronger nose. “More of a linear, almost romanesque look,” he says. “A slight bit of scalloping [of the bridge], but much less severe refinement or upturnment of the tip. There should be a certain amount of visibility of the nostril holes, but not as much as the piggie snout in the 60s and 70s.”

Moretz admits that many of his patients are Jewish and/or come from Mediterranean backgrounds, such as Turkey, Greece, or Iran. Rhinoplasty is not about assimilation or acceptance in American culture, so much as about not wanting the nose to be as dominant a structure, he says. Because of its central location on the face, says Moretz, the nose is often one of the first features used to identify a person.

“Most people don’t want to lose that degree of ethnicity in their face, they just want to tone it down,” Moretz adds. And for certain individuals, depending on what industry they work in or their personal needs, rhinoplasty may increase their confidence.

In talking to my mother and to friends about their nose jobs, I found the most recurring issue to be one of self-confidence. “I feel more comfortable as myself,” my high school friend says now.

While I personally haven’t considered rhinoplasty, I recognize that no matter the issue — be it hair, weight, acne, or nose — feeling comfortable in one’s own body should not be under-emphasized. Nose jobs and other image-based efforts aren’t always about vanity, but about achieving a sense of self-love and appreciation. And for some, like Mom, that still includes an appreciation for being Jewish.

“When I see actresses who are non-Jewish like Cote de Pablo who portray beautiful Jewish Israeli women, then I think why not look the best I can for myself, enhance my other features, exude the confidence I want, and alter something I do not feel that content with,” Mom says. “And perhaps that is why I had my nose job in the first place. Oddly, my Jewish identity is growing stronger in the process. The less Jewish I look the prouder I am to say I’m Jewish and my Star of David never leaves my neck.”