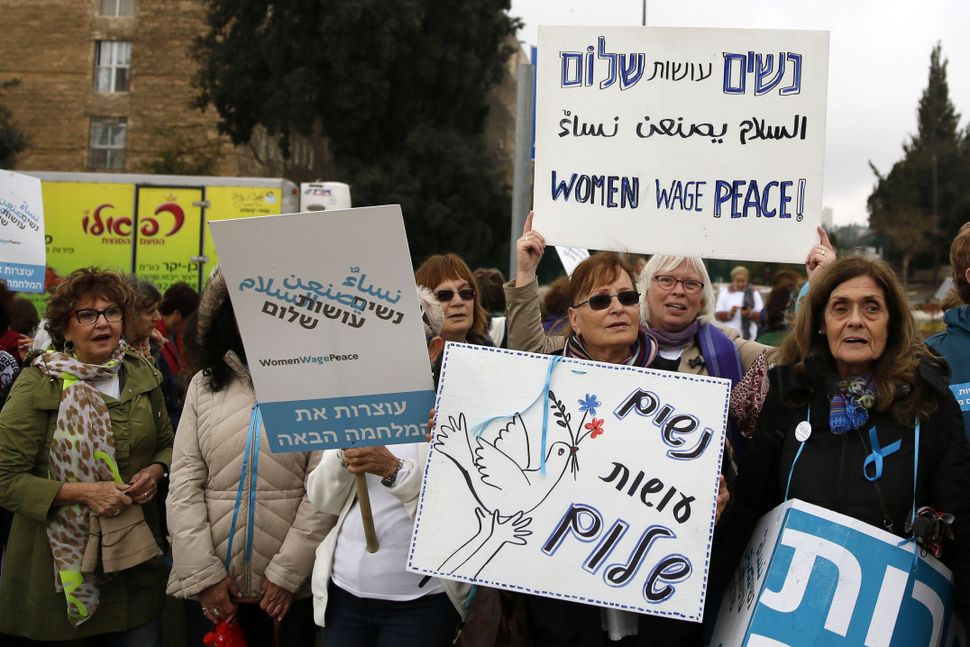 For Israelis and Palestinians, October has been a grueling month. The violence we are used to ramped up to include near-daily confrontations, stabbing, car-ramming and shooting attacks. If war-weary civilians on either side of the Green Line were hoping the crisis would bring out strong leadership and some shred of hope, they were very much mistaken. The peace process, frozen since the last U.S.-mediated talks in 2013, remains well and truly on ice.

By sheer coincidence, as we go one more round of our tragic death dance, the UN has been marking the 15th anniversary of a landmark Security Council resolution on peace, or more specifically, women and peace. UNSC resolution 1325, passed in 2000, calls “to increase representation of women at all decision-making levels in [countries and institutions] … and in mechanisms for prevention, management, and resolution of conflict.” Last week, the UN held a day of debate on 1325, and released a global study on its implementation

The old cliché goes that if women ruled the world, there would be no war, or at least that there would be less of it. The global study’s findings seem to hold up the cliché. When more women are at the negotiating table, it found, the probability of a peace deal lasting at least two years goes up by 20 percent. This goes up to 35 percent over 15 years. Not only that, but the study found that states with higher levels of gender equality tend to resort less to use of force against other states. And it found a lot of areas where gender matters in peace processes. (Ok, here’s just one more: Women are apparently more likely to spot extremism in their families so they are key in fighting in it). When it comes to the Israeli-Palestinian peace process, the study cites research classifying the influence of women as “none to weak.” In 11 out of 13 countries where women’s influence was “strong,” a peace deal had been reached and was being implemented. Colombia and the Philippines are highlighted as good examples.

Anyone following the Israel/Palestine news cycle recently will notice the preponderance of male names in the headlines. In Israel, all members of the security cabinet save for Justice Minister Ayelet Shaked – hardly a dove – are men. The Palestinians fare no better. It’s true that in this latest round of violence, seven Palestinian assailants (out of more than 50, according to data collated by analyst and strategist Nehemia Gershuni-Ayhlo have been women, and the brutal videos of attacks popping up too often in my Facebook feed often show female police officers and soldiers on the scene. But Israel Defence Force combat units are overwhelmingly male, while Palestinian militants are mostly male, too.

If there were more women round the negotiating table here, would it actually make any difference? Israeli women have called the shots in war and peace-time decision-making. Prime Minister Golda Meir, widely derided for her role in the 1973 Yom Kippur War, is the first example that springs to mind. MK Tzipi Livni, now a member of the opposition, was a member of the security cabinet during Operation Cast Lead in Gaza in 2009. She was also in charge of peace talks in Netanyahu’s last government.

In a country where serving in a military combat unit is seen as a pre-requisite for making defense decisions, there is little room for females at the top. Still, Israel signed on to 1325. In 2013, a coalition of 30 Israeli women’s groups launched “A Comprehensive Action Plan for the Application of United Security Council (UNSCR) Resolution 1325.” At the time, Meretz leader Zahava Gal-On made the following plea for more inclusion of women: “Women don’t look at issues through rifle scopes and don’t think in purely military terms…It’s our job to break up these old boy’s clubs.”

The action plan was two years in the making and involved much disagreement over pesky issues such as the occupation – the word wasn’t included in the plan, according to Haaretz. In fact, while the coalition included right-wing Israeli Jews, most Israeli Palestinian feminist groups ended up bowing out. An earlier attempt to get Israeli and Palestinian women to monitor 1325’s implementation together – the 2005 International Women’s Commission – broke down in 2010 over political disagreement.

Clearly, the gaps which prevent Israelis and Palestinians, Jews and Arabs, from calling it quits replicate themselves among women, even if they are feminists. It would be naive to think otherwise. Israeli and Palestinian women look at each other across a vast political and cultural divide, and face different societal challenges. They can’t just put aside their differences for the sake of peace because they have biology in common.

There is a strong history of women’s activism for peace among Israelis and Palestinians, from the anti-war Women in Black, founded after the first intifada in 1988, to the 1997 Four Mothers movement, which pushed for Israel’s pullout from Lebanon. Last year, a new movement called Women Wage Peace.) – inspired by the Four Mothers – joined the fold.

As Palestinian women involved in peace activism with Israelis have said (see this article from 2012 on the IWC, for instance: ), they can’t put aside the Palestinian national struggle for a feminist one. Israelis can’t either.

Which brings us back to the cliche. We can’t know, of course, whether a world run by women would be more peaceful. What we can say, however, is that women in positions of power act and express themselves within a patriarchal structure (Elle’s recent More Women video illustrates the point beautifully ). The female militants carrying out stabbing attacks against Jews, the policewomen who disable an assailant, the Miri Regev’s who spout violent rhetoric, are operating in a world mostly run by men.

So the fantasy of a female-run, no-war world remains a fantasy. In the meantime, in our pretty grim and hopeless current situation, making more room for women at the table and giving more space to peace activism that brings together Israeli and Palestinian women, even if they disagree on their priorities, couldn’t hurt, could it?