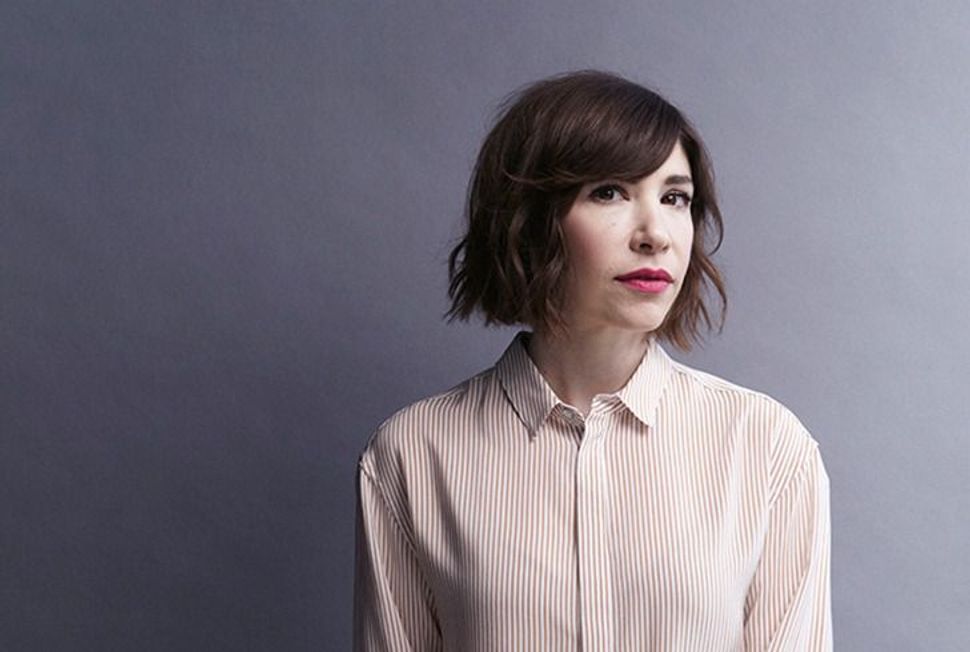 The appeal of the rockstar memoir is that not only can the reader see behind a larger-than-life figure, but that they can experience more of that largeness. To read a book where the protagonist is accompanied by screaming fans, endless drugs and boundless creativity is to ride in the sidecar of a motorcycle while the driver gets a face full of bugs. In other words, you get to live their lives vicariously— experience what they, the rockstar, saw without any of it affecting you. There couldn’t be anything less punk.

There are elements of a tell-all in “Hunger Makes Me A Modern Girl,” the tremendous new memoir by Carrie Brownstein, the punk-turned-comedian who has found fame as the guitarist for Sleater-Kinney and in the television show “Portlandia.” There’s a window into Brownstein’s somewhat chaotic childhood, with her anorexic mother and a gay father in the closet for most of his life. There are romances, including the fabled one with bandmate Corin Tucker. But more than any of that, “Hunger” rests on the promise that a creative life is one worth living, one worth sacrifice. It’s a guide to living with one particular life as a case study.

The early chapters of the book have a cumulative effect of a math equation: performative child + disinterested parents with visible problems of their own + access to multiple Television albums = punk. But while Brownstein summarizes her familial pain, the situations feel unique and new. She found respite in her mother’s disease, it allowed her to assume a sense of responsibility and stature secondhand. In her father’s homosexuality she saw “the history of the Internet, at least in terms of how we use it for social media and networking. In fact, if it weren’t for the Internet, I don’t know if father would have realized, or been able to acknowledge, that he was gay.”

The years covered in “Hunger,” roughly the early 1980s through 2006, with a touch of 2015 at the end, are a period of remarkable technological and social change. 9/11 gets a page, the Internet emerges without much reflection on how it changed the music industry. This is fine. The history Brownstein wants focuses on is that of her own creation, the music scene in Olympia, WA, and beyond, some combination of Riot Grrl and Blog Rock. At this point, the Riot Grrl movement has been covered many different times from many different angles: there have been documentaries on participants (“The Punk Singer”), definitive histories of spanning the entire movement (Sara Marcus’ “Girls to The Front”), countless oral histories, New York University has a Riot Grrl Collection dedicated to collecting “the personal archives of those involved in the creation of early Riot Grrrl zines, music, and activism.”

While Brownstein doesn’t quite fit that definition — she gives a shout out to early Riot Grrl band Bikini Kill for paving the way for her work — she offers a unique vantage point not only on specific moments, like a Heavens to Betsy [an early band of her soon to be bandmate Corin Tucker] concert, but also on the idea of an underground arts scene in general. She makes the Riot Grrl artists out to be like 19th Century Utopians, Olympia in the 1990s a modern version of Brook Farm. There was “so much pressure on this single indie and punk movement,” she writes, “one that clearly couldn’t address all forms of personhood or inequality.”

The intensity of the movement shook and inspired and intimidated Brownstein. Writing about Tucker, Brownstein is able to get across what made Riot Grrl vital and also somewhat frustrating: “when you’re part of an early movement like she was with Riot Grrl — where she had to create a space for herself and her audience, where every show felt like a statement, where before you could play and sing you had to construct a room, one you’d be respected in, wouldn’t get hurt in, a space that allowed for or even acknowledged stories that hadn’t been told before, about sexual assault, sexism, homophobia, and racism, and then, musically, you have to tear that very space down — there’s not a lot of room for joking around.” While at times she wishes she could have come up in a somewhat goofier scene, like the glitter rock phase that sparked the New York Dolls in the 1970s, Brownstein gets across how Riot Grrl filled a void that nobody else would touch. Her discussions of the highs and lows of operating with the movement mirror the Identity Wars many face today across college campuses and online. Everyone treats the 2015 P.C. Wars like a new development, “Hunger” provides much needed historical context and nuance for anybody wondering how to provoke and not offend at the same time.

Every part of “Hunger” before Brownstein joins Sleater-Kinney seems to be winnowing down the world until it is just her, Tucker, their eventual drummer Janet Weiss, and their world of sound. Awkwardness in her family leads to Olympia, Olympia leads to Sleater-Kinney, and Sleater-Kinney becomes a laboratory for Brownstein to perform her sonic experiments. She works through song by song, brick by brick. Hunger is for any reader who wants to see how a song is actually built, how an album is constructed. Writing about the band’s second album, “Call the Doctor,” she discusses how she and Tucker built a conversation around their guitars and vocals, how they sound began to resemble a “junkyard come to life”, and then how the album drew from working in customer service, which is about “self-erasure, subjugating and then selling yourself in order to sell the product, merging with the commodities until you feel like one. Like many young women, we felt like we were on display.” Listen to “Call the Doctor” after each one of these analyses, and it feel sound fresher, richer. There’s no goal of clarity on any Sleater-Kinney album, but Brownstein is able to lay out a trail guide that points out the bright spots on each album.

Brownstein doesn’t write about her creativity in a romantic sense, she sees it as her “rescue and salvation. It was the first time I felt I could be vulnerable in my creativity in which the emotional and psychic stakes were neither futile nor self-annihilating. That unlit firecracker I carried around inside me in my youth, eager to ignite it at the slightest provocation, to detonate my whole being and fill the room in a glowing spectacle, found a home in music.”

“Hunger,” coming in at a slim 244 pages counting the acknowledgements, often delves into run-on sentences like this, which call to mind the romanticism of Beat writers like Jack Kerouac more than any Sleater-Kinney lyrics. Kerouac found beauty in confusion, in transience, two qualities often associated with music: a song starts, a song glows, a song ends. But Brownstein finds meaning in the concrete and physical, the right here and the right now. “Hunger” is a testament to the fact that the transient and permanent are, in fact, intertwined.

There are two faceless villains haunting “Hunger, Disease and Tour.” Touring becomes a weird, emotional beast with which Brownstein must constantly wrestle. No Zepplin-esque escapades abound, the biggest scandal that ever comes out of a Sleater-Kinney tour was when they threw a mixtape personally made by Elliott Smith out the window on a lark. While Brownstein is reluctant to delve into her personal life, she mentions repeatedly how touring strained her relationships and how a “nomadic life fosters inconsistencies and contradictions within you, a vacillation between loneliness and need desperately to be left alone.”

The most shocking aspects of “Hunger” come when Brownstein discusses her various maladies, both mental and physical. At one point describing a scene n Brussels, when Sleater-Kinney is on tour and Brownstein starts to harm herself, torn apart by guilt over contracting various diseases and injuries. She laughs at herself, wishing she could have an illness that would fit the mask of a rockstar, but her shingles break up the band.

The overarching point of Hunger,” though, is that this is all worth it. The diseases and fights and horrible living accommodations are worth the possibility of being creative, because in her work ethic she has found a life worth living. As Sleater-Kinney reunites at the end, a line from the band’s newest album, “No Cities to Love,” stands out brighter than ever: “It seems to me the only thing that comes from fame’s mediocrity / How could you steal the thing I love and keep it from me just out of touch”. In her work, Brownstein found some that neither her parents nor a cool scene nor a relationship could foster. “Hunger Makes Me a Modern Girl” shows how that discomfort, the same discomfort that fosters any creative impulse, can be built into a home.