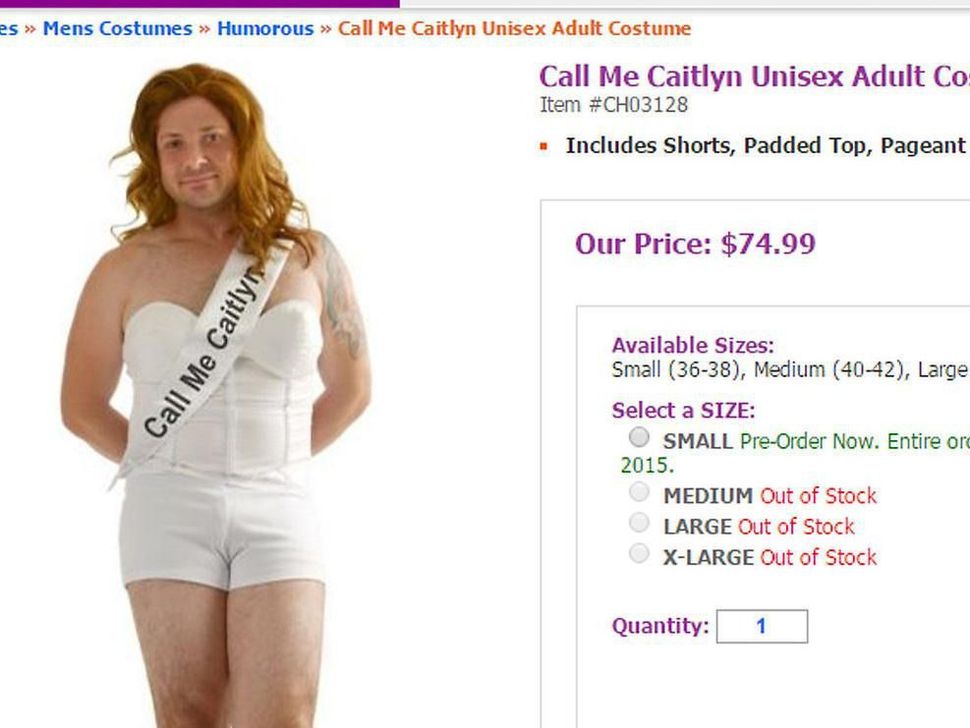 After uproar in the comments section, Walmart.com seems to have pulled its controversial Israeli soldier costume,just in time for Halloween. It might not be the best time ever to be promoting dressing up like an IDF soldier, but the makers of offensive Halloween costumes have never been particularly concerned with timing or taste. In case you’re in need of further proof, here are 5 examples, in no particular order, of costumes that are bad for women, queer folks, people of color and humanity in general. 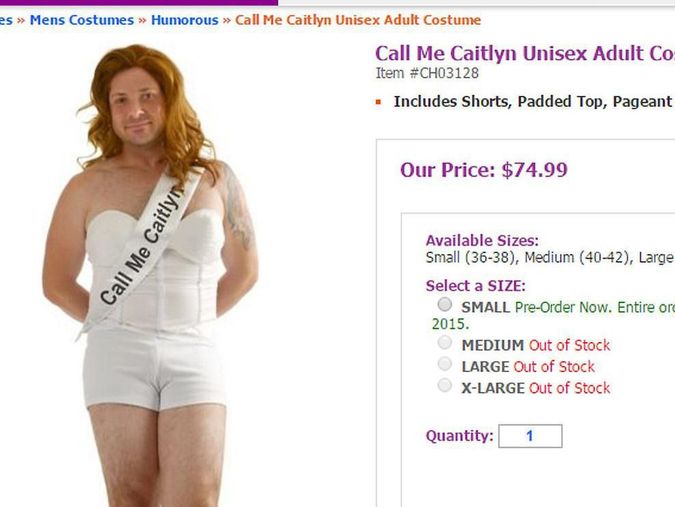 The transphobic among us believe that Jenner, and all transwomen, aren’t “real” women, and the latest ugly rant by Germaine Greer is a great example of how even those who identify as feminists can be hateful. I hate to break it to you, but if your feminism doesn’t include transwomen, it’s not feminism. And if your plans for Halloween include dressing up like Caitlyn, you are perpetuating transphobia. Although Caitlyn herself has said she doesn’t think dressing up like her is offensive , she doesn’t speak for the trans community. All communities are made up of individuals. Remember this. Write it down. And while you’re at it, write down the names of the 22 (as of October) transwomen of color murdered in 2015. 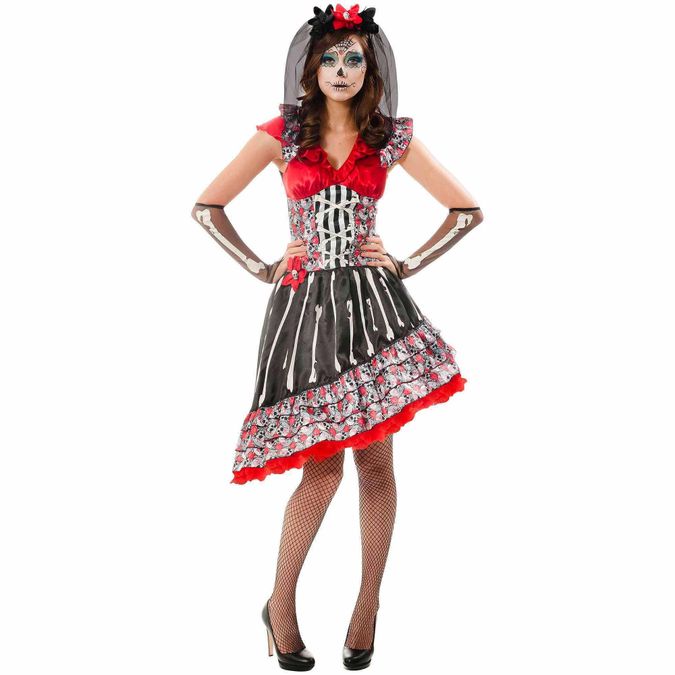 I did a quick yet excruciating browse of the costumes on Walmart.com, and learned that if you want to dress up as another culture, the options are numerous. You can be an all purpose Native American (because they’re obviously all the same), or a ghastly appropriation of the Day of the Dead. If you’re a woman, you can (read: must) be sexy while exploiting and fetishizing another culture! What a world.

Repeat after me: Cultures are not costumes. Unfortunately, because we live in a white supremacist, capitalist world, cultural appropriation has become a mainstream practice, and at the same time, is complicated. There is nothing complicated, though, about the costumes Walmart is selling. They are lazy and racist, but that behavior isn’t limited to wearing those costumes. As a white person (and yes, a Jew), you can achieve the same end by putting on blackface, dreading your hair, and more.

This one could also have been included in the “other cultures” category, but I’m giving it a space of its own, because it’s a chronic offense in Jewish communities and we keep treating it like it’s a non issue. For a few years, I worked at a large, well financed Hillel, where students regularly dressed as Arabs on Purim. There was at least one of these costumes per year, and that was just among the folks who came to the Hillel sponsored Purim party. It was an excellent reminder that 1) people are often willingly ignorant, and 2) a united front is better at effecting change than a lone, flustered staff member, 3) interrupting this racist practice is as important as not doing it at all.

Cool, right? Because people who go to prison are awful and deserve to be mocked, and we would certainly never, ever be those people. Jews don’t go to prison, unless they’re Bernie Madoff or Jonathan Pollard. The prison industrial complex has nothing to do with us. So why should we care about women sent to prison because of minor drug offenses, women who are shackled while giving birth, women with HIV, women who are given 20 year sentences for firing a warning shot at their abusers, that black folks constitute nearly 1 million of the 2.3 million people in prison? What about that says “Halloween fun” to you? Nothing, I hope.

Pro tip: If you want me to either unfriend, unfollow, or yell at you on Facebook, post a picture of either yourself or your child dressed in a police officer’s uniform. When you or your child wear that uniform, you’re being entirely dismissive of the fact that since Michael Brown was murdered by Darren Wilson in Ferguson on August 9 of this year, there have been at least 1,495 people killed by police officers. You are erasing a legacy of violence and white supremacy in exchange for perpetuating a narrative of heroism, justice and color blindness.

Okay Chanel, we get it, but what CAN I be for Halloween?

Check out these suggestions from Bitch Magazine, these from Bustle, and get your Feminist Halloween costume questions answered at FeministHalloween.tumblr.com.