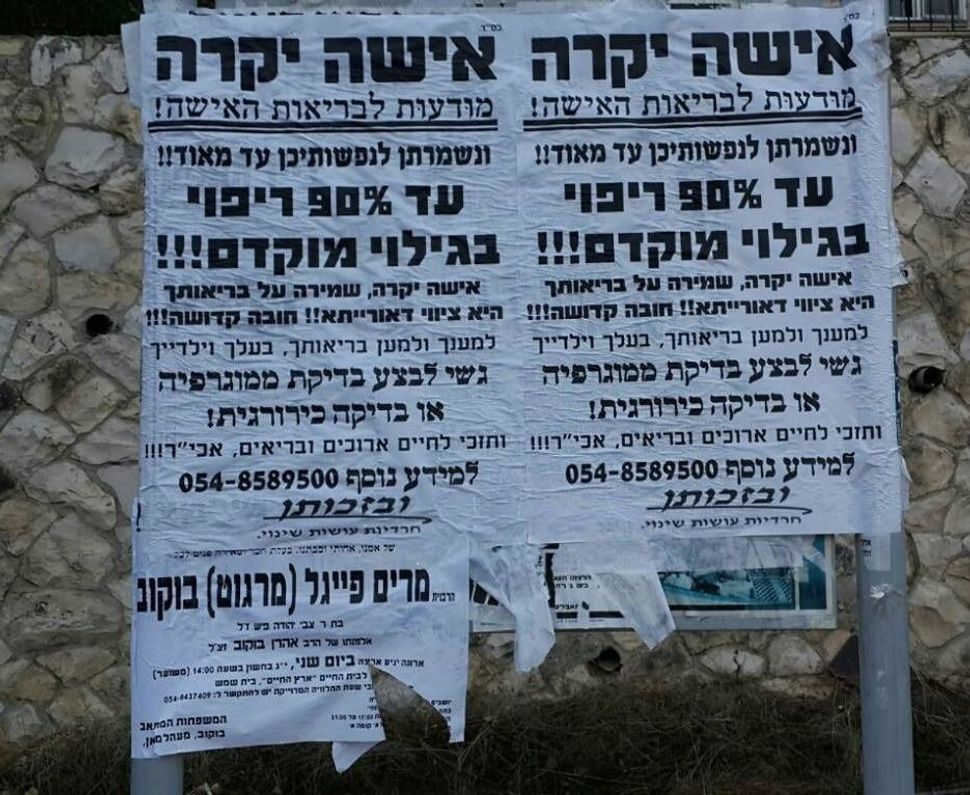 Israel’s election feels like a lifetime ago. Those of you with a suitably long memory, however, will recall that one of its defining features was empowerment of the underdog. There was the historic unification of Arab parties and Jewish-Arab party Hadash on one slate. And then there was the small matter of a feminist revolution with U’Bizchutan – Haredi Women Making Change, the first-ever ultra-Orthodox women’s party, joining the fold.

Now, more than six months later, most of us have forgotten all about this trailblazing addition to Israel’s political scene. U’Bizchutan — which means “on their own merit” in Hebrew — was one of two initiatives at the time to increase Haredi women’s representation in Knesset. A separate campaign urged women to boycott Haredi parties unless they had female lawmakers. (And they don’t: The two main ultra-Orthodox parties — Shas and United Torah Judaism — have zero female Knesset members.)

As was to be expected, U’Bizchutan, a truly niche party, didn’t pass the 3.5% electoral threshold. They got over 1,800 votes, though; that’s more 9 other parties in the running. Despite this, the party and its leader Ruth Kolian, a veteran activist, mother of four and – as if she wasn’t busy enough already — law student, hasn’t stopped looking out for Haredi women’s needs. For Breast Cancer Awareness Month in October, the party launched a campaign drawing attention to the worrying ignorance among Haredim about the disease.

As 34-year-old Kolian wrote on Israeli women’s site Saloona this week, though Haredi women have a lower rate of breast cancer than secular women, they have a far higher mortality rate — as much as 30% higher, according to some estimates. They also tend to suffer from a more aggressive form of the disease.

Modesty, that key concept in Orthodox Judaism, is the overriding reason for the tragic statistics, Kolian says (her article, by the way, is entitled, “There is no modest way to die”). “We don’t talk about these things in our community,” she writes, “because these are private, immodest things. We don’t mention parts of the body.” Euphemisms like “women’s illnesses” are used to refer to diseases like breast cancer, which adds to the lack of awareness. In her post, Kolian relates how, when she brought up this “immodest topic” on a Haredi radio show, she was threatened with being taken off the air.

Communal restrictions on Internet use complicate matters further, leaving Haredi women with little medical information at their fingertips. “Secular women can go on the internet and find out, not all Haredi women can. And Haredi women don’t read newspapers. It’s a problem,” Kolian told me over the phone on Friday morning. They end up relying on the women around them for advice. But what if these women are also unaware of the risks?

According to a report presented to the Knesset last November, 27 percent of Haredi women don’t know if there is a medical history of breast cancer in their family, and around 50 percent have never had a mammogram to detect the disease early. The tragedy is that, according to the Israel Cancer Association, there is a 90% chance of beating breast cancer when it’s detected early.

Kolian points to another reason, too; that of a life so devoted to one’s family and children that there is little time to look after oneself. This, combined with the lack of knowledge, can be a fatal mix.

Since Wednesday night, U’Bizchutan have pasted black and white posters typical of Haredi neighborhoods in parts of Jerusalem and Beit Shemesh. Elad is coming soon, too, she says. In line with modesty norms, the posters don’t mention the word “breast.” Rather, they urge women to get mammograms or a surgical examination as a “holy duty.” A fundraising campaign to pay for the posters has raised 109% of its — also modest — $2,000 goal. “Terror kills, but breast cancer kills more,” the campaign site says. “Help us raise awareness to those living in a Ghetto of Silence.”

This is truly a case of the personal being political; ultra-Orthodox male lawmakers have not made this women’s health issue a priority. Kolian points out that they have even been absent from Knesset sessions on breast cancer.

Still, while Haredi women face specific challenges, Kolian insists her struggle isn’t just about the ultra-Orthodox community (around 12 percent of Israel’s population). Women from all parts of society face similar problems, chief among them is that women’s concerns aren’t enough of a priority in a male-dominated political sphere. In Haredi politics, we see it in the extreme, but female lawmakers still make up less than a quarter of Israel’s Knesset in general.

Hopefully this campaign will save women’s lives. U’Bizchutan’s outspokenness provides hope on another front, too. Their refusal to see Haredi women’s problems, or their feminist struggle, as separate, gives the party’s work truly radical, revolutionary potential for Israeli women. For the moment, at least, it certainly looks like they are shaking things up.