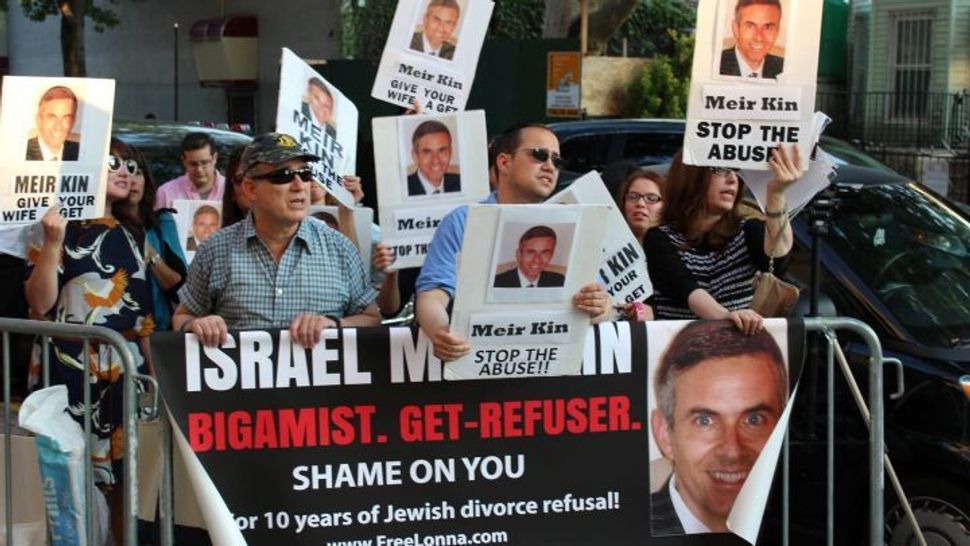 It seems everybody wants to be a celebrity these days. But the men whose names and faces are plastered across Facebook and Twitter, identifying them as husbands who are refusing to grant their wives a Jewish divorce, are surely famous against their will.

The latest media star is a life coach in Dayton, Ohio, who calls himself Eli Shur. Thanks to a viral social media campaign, the Ohio Jewish community – along with the rest of the world, now knows that his real name is David Porat and that he left his estranged wife behind in Israel eight years ago in violation of the law and has refused to grant her a “get” – the document that allows a divorce to be finalized under Jewish law. Without a get a woman is “chained” to her status as a married woman, making her an “agunah”. While the term “agunah” technically refers to women whose husbands have disappeared, it is widely used to refer to any woman who is being refused a get.

A heartbreaking video interview with Porat’s wife and children in Israel, has made its way around the Internet and the world. The video – and the campaign – is the product of the ORA – the Organization for the Resolution of Agunot, headed by Rabbi Jeremy Stern. The video was put online on October 21 – deliberately timed to raise awareness in anticipation of a real-life mass rally against Porat in Dayton on November 8.

However, Stern’s goal in producing the video, is to make it so viral so that every Jewish community knows who Porat is.

“We want his name known throughout the U.S. and worldwide, so he can’t escape again, he can’t hide in yet another community, that his back is against the wall … We aim to make David Porat/Eli Shur so famous, he can’t slink away, change his name and continue his abuses towards his family,” said Stern.

Once upon a time, shaming Orthodox Jewish men reluctant to release their wives from their marital bonds by giving them a get was straightforward and low-tech. In previous centuries, Jews nearly always lived in Jewish communities with close family ties and communal pressure could be applied – recalcitrant husbands could be ostracized from the community, punished socially and economically until they conceded. “The ties were tremendous. No one would speak with you or welcome you into their homes. That was an extremely effective way to convince someone, and can still be … The challenge in contemporary society is the fact that when husbands are pressured by their local communities or their rabbi and are then able to relatively easily move to a different community to avoid the pressure,” Stern said.

Over the past five years, social media has firmly established a place in the toolbox of pressure to apply to get refusers. The first high-profile use of Internet shaming occurred in the 2011 Aharon Friedman case. Friedman worked as congressional aide in Washington, DC. The fact that he worked for a politician and the nature of his job made him vulnerable to public pressure. Social media efforts sparked intense interest in the case by the mainstream media and ORA’s real-life rally against Friedman was covered by the New York Times.

Two subsequent high-profile cases that grabbed headlines over the past few years following aggressive social media efforts were that of Gital Dodelson and more recently, Rivky Stein – both are young agunot who aggressively sought to be “unchained.” Dodelson was successful in her battle against a powerful rabbinic family, Rivky is still fighting against her husband both in court and online, still denied a get. Not all of the campaigns are under the auspices of ORA – some agunot are managing their shaming campaigns independently.

The reasons for refusal vary from husband to husband. Some use get denial as a form of blackmail or extortion – to avoid paying money or to profit off of their wife’s desire for a get, or use it as a bargaining chip in a custody dispute to demand more custody rights than those granted by a court. Some actually want to force their wives to continue to live with them, very often in an abusive situation, and withhold a get because if they can’t be her husband, they want to deny her the ability to marry another. And then there is sheer spite – refusing to give a get as a means of punishment.

Whatever the reason, says Stern, “it comes down to power and control. Get refusal is a form of domestic abuse.”

ORA was founded in 2002 by a group of students at Yeshiva University – and Stern came on board in 2007. Since their founding, he said proudly, they have resolved 244 cases.

“We don’t see ourselves as representing either side – the husband or wife,” he says. “Our goal is the timely and unconditional issuance of a get.”

By the time they turn to ORA for help, wives have usually exhausted all other efforts to obtain their get, and have been separated on average for three years, some for many more. He stresses that public exposure – from angry rallies at their homes to viral social media campaigns – are “a last resort” against men who have resisted every rational, legal, and civilized appeal to release their wives from their marriage through amicable negotiation or private pressure such as contacting the husband’s employer, customers, rabbi or other community leaders.

Orthodox society is intensely private, and so women go public only “after no stone has been left unturned. We do everything we can to avoid making it a public spectacle.”

Stern stresses the group does not use what he called “Soprano-like” tactics that include threats and physical violence, a method popularized in an episode of the hit mafia drama that was based on a real-life phenomenon.

But when the time comes, Stern is good at making a spectacle – loudly denouncing get refusers at public rallies and online.

Last February, Stern happened to attend a small minyan (prayer service) when in walked a recalcitrant husband named Yehiel Friedman, who has denied his wife a get for eighteen years. Stern created some reality drama by loudly announcing who Friedman was, and informed him that he wouldn’t be welcome in this minyan until he gives his wife a get.

He recorded Friedman’s stunned reaction on his phone, put it up on YouTube, and the video went viral, garnering more than 46,000 views. “I was contacted by Jewish community members and rabbis in the area, who said we had no idea who this guy is who was coming into our communities to pray” and who all resolved not to welcome him in their synagogue. Friedman’s case, however hasn’t yet been resolved and he still appears on the website’s list of shame – a page devoted to recalcitrant husbands.

Which leads to the question of whether this high-powered new weapon of Internet exposure is truly effective. Stern says that since the phenomenon is still relatively new, and hasn’t been used enough to draw a conclusion from statistics the jury is still out on whether or not viral shaming it is more successful than other means in getting husbands to acquiesce.

What Stern does hope is that it has an effect that can’t easily be measured – that of deterrence.

“I hope there are men out there who may be getting divorces who can now see clearly how rabbis and the community respond to get refusal. And then decide it is not worth it for them to take that leap of refusing to grant a get, because they fear having their name splashed across social media.”