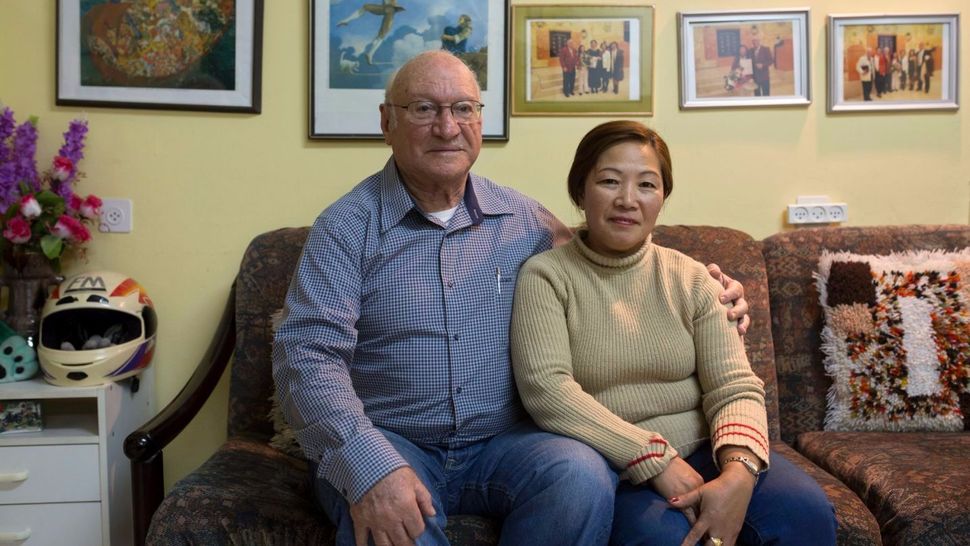 Using the special Yemenite chant he learned decades ago as a young boy, Moshe Hizmi recites the Haftara portion that follows the weekly Torah reading, as a hush falls over the congregation.

But the scene playing out on the podium this Shabbat at Beit Daniel, Israel’s flagship Reform congregation, is different from anything he remembers growing up.

Standing beside him and giving him his cues is a female rabbi – a former kibbutznik, to be precise. And in the chair behind him sits his proud wife – a Filipino convert.  Wrapped in a colorfully embroidered prayer shawl, Rina, as she is now known, follows the reading diligently from her own prayer book.

“It’s because of her that I’ve come back to Judaism,” concedes Moshe over the Kiddush lunch that follows the service.

Moshe and Rina are one of about half a dozen middle-aged couples at this Tel Aviv synagogue who share an unusual profile: The women are all Filipinos who converted to Judaism through the Reform movement, and their husbands or partners are native-born Israelis who grew up in Orthodox or traditional homes, but ultimately abandoned religious practice, only to return to it under the influence of their Jewish-by-choice wives.

For the Reform movement in Israel, it has been a double bonanza. “Our congregations are becoming more diverse and interesting, not only because of these Jews of choice who have been joining, but also because of their spouses,” notes Rabbi Gilad Kariv, executive director of the Israel Movement for Reform and Progressive Judaism. “We now have coming through our gates a new group of native-born Israelis who might not have discovered us otherwise, and this is one of the reasons it is so important for us to embrace Jews of choice.”

Beit Daniel may be at the epicenter of this new phenomenon, but according to Kariv, more and more couples with similar profiles can be found at Reform congregations around Israel. And increasingly, they distinguish themselves as active and devoted members.

The catalyst for this trend, Kariv believes, was a 2002 Supreme Court ruling that permitted anyone converted to Judaism by the non-Orthodox movements to be identified as Jewish in the Population Registry. “Since that decision,” he notes, “thousands of individuals have converted to Judaism through our movement here in Israel, and they have become an integral part of society.”

Although Reform converts to Judaism are recognized by the Population Registry, the Orthodox-run Chief Rabbinate does not consider them Jewish. For that reason, its rabbis will not officiate at their weddings, and their union will not be recognized by the state, unless they also marry abroad. Orthodox conversions are for the most part not a viable option for foreign workers in Israel, a large share of them Filipinos, as the Chief Rabbinate tends to suspect them of being motivated by a desire to obtain permanent status in the country rather than a true passion for Judaism.

Since individuals converted to Judaism through the Reform movement in Israel are not entitled to automatic citizenship or any other benefits conferred under the Law of Return, these particular converts are not susceptible to suspicions of going through the process for any material gain.

That doesn’t necessarily mean Reform Judaism was a default choice. “I preferred Reform Judaism because it’s modern, the women sit with the men, and you can dress normally,” says Sigal, as she is now known, whose partner Chanoch Shimshi is head of the prayer committee at Beit Daniel.

As is the case with most of these couples, this is chapter two for Sigal and Chanoch. She has three children from a previous marriage, and he has two.  Like all these Filipino women, Sigal came to Israel to work as a caregiver. Six years into her stay in the country, she met Chanoch, who was introduced to her through a common friend. “I had put the word out that I was interested in meeting a Filipino woman,” recounts Chanoch. “I guess my gut instinct told me this would be a good thing for me, and a friend gave me her number.”

They’ve been together for eight years, and last year Sigal completed her conversion to Judaism. “She’s by now more religious than me,” boasts Chanoch. “You should see her. She won’t leave the house Friday night without lighting candles.”

Chanoch, who moved to Israel from Latvia as a baby, grew up in an Orthodox home in the coastal city of Netanya. A Bible and geography teacher by training, he rebelled against Orthodoxy as an adult. “As I see it, rabbinical Orthodoxy contradicts the spirit of the Torah,” he says.

He and Sigal attend services regularly at Beit Daniel on Friday nights and Saturday mornings. Together with the other mixed Filipino-Israeli couples, they have Shabbat dinners almost every week. “We have a WhatsApp group so that the women can coordinate who’s bringing what,” explains Sigal. “We leave the men out of that.”

Moshe and Rina Hizmi, who converted two years ago, met at a Tel Aviv nightclub and have been married for almost eight years. He has two children from a previous marriage, and she has one.

Moshe, who was raised in a traditional home, was completely non-observant by the time the two of them met. That is why Rina initially didn’t tell him when she first ventured into Beit Daniel.

“We had been together for quite a few years at that point,” she recounts, “and we’d always go to his family for Rosh Hashanah and for Passover, but I never understood what was going on. That got me thinking about converting, and a friend of mine recommended the Reform movement.” After attending Shabbat services on her own a few times, Rina suggested that Moshe join her. He was initially reluctant, as he recalls. “What have I got to do with the Reform movement?” was his response.

But deep down, he admits, he was quite moved. “It made me happy that she wanted to become Jewish,” he says.

His wife’s successful integration into Israeli society, observes her proud husband, goes beyond her smooth transition to Judaism.

“She knows how to cook up a mean Yemenite meat soup,” he boasts.