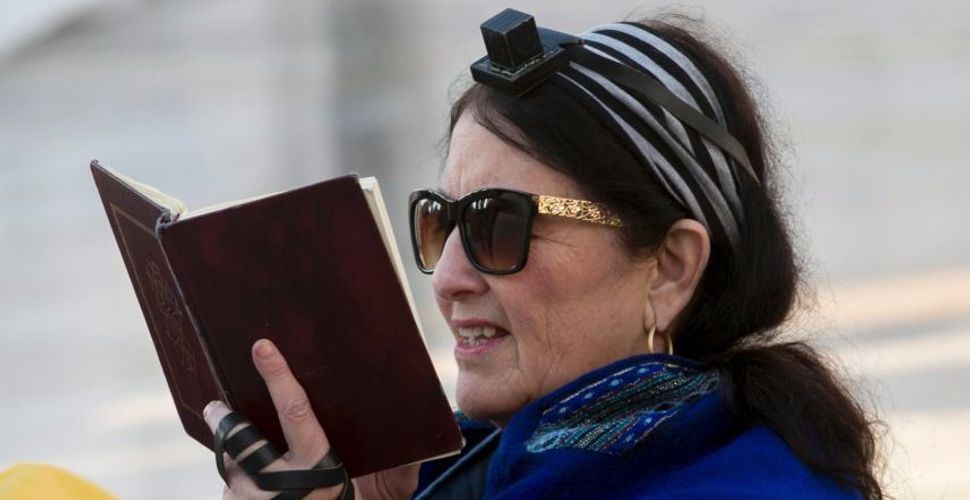 Although she has been fighting for the right of women to pray aloud, read Torah, and put on tefillin at the women’s section of the wall for nearly three decades, Hoffman herself had never performed the mitzvah.

Usually articulately witty, she looked intently at the black leather bands tied around her arm and was reverently silent for a few long moments.

Then she quipped, “I never had a bat mitzvah. We Jewish women are survivors of 3,000 years of patriarchy. No wonder we don’t know how to do this.”

Dina Greenberg, a 45-year-old hi-tech professional from Moshav Neve Yarak, near Ramat Hasharon, brought laminated instructions on how to don tefillin, which she handed out to the excited women. As one woman completed the customary blessings for the first time, Greenberg cheered and tossed candies, reminiscent of the candies thrown at children as they complete their bar or bat mitzvah.

“I am an Orthodox woman,” Greenberg explained. “A long time ago, our rabbis ruled that women do not have to put on tefillin because they must be available to care for their families and homes. But this is not true today.”

Hoffman and Greenberg were part of a group of 13 women who came to learn the practice of tefillin as part of “The World Wide Wrap,” an international initiative of the Federation of Jewish Men’s Clubs, an auxiliary of Conservative Judaism, to encourage men and women to practice the ritual of tefillin. The initiative is held in synagogues throughout North America and in Australia, India, Europe and South America.

The “Wrap,” initiated in 2001, is held annually on the Sunday morning of the Super Bowl, part of a special morning minyan (prayer quorum) where the commandment of tefillin is explained and demonstrated.

This is the first year “The World Wide Wrap” has taken place in Israel, and the Federation of Jewish Men’s Clubs donated several sets of tefillin to Women of the Wall to mark the event.

While perhaps only a few of the women at the wall were aware of the impending football championship, this group was also celebrating the recent decision by the Israeli government to create an egalitarian and pluralistic prayer space at the Western Wall, where men and women will be permitted to pray together.

While it was praised by the Reform and Conservative movements as a historic step, ultra-Orthodox leaders decried it, and archeologists and the Palestinian Authority expressed various concerns. But some of the strongest objections to the plan have come from other women.

Some Orthodox women who have struggled side-by-side with Hoffman since the inception of Women of the Wall in 1988 have organized themselves into a group known as “Original Women of the Wall.” They emphasize that the main goal of the group has been to pray in the women’s section together without men, which, they say, runs counter to even the most liberal interpretations of Orthodox Judaism.

They also fear that once the new pluralistic area is open, it is likely that regulations prohibiting women from organizing prayer groups in the women’s section will be enacted once again. The chief custodian of the Western Wall, Rabbi Shmuel Rabinowitz, has already said that once the new egalitarian space is set up, women will no longer be allowed to wear prayer shawls and tefillin in the traditional segregated area.

Writing in Tablet Magazine last week, noted feminist Phyllis Chesler, a long-time member of Women of the Wall, called the plan “a travesty,” adding there was “an Orwellian use of language employed to persuade perfectly good Jews that… allowing misogynists to turn the Kotel [Western Wall] into a Haredi shul is a progressive accomplishment.”

Rabbi Vanessa Ochs, writing for the Religious News Service, accused Hoffman of selling out her feminist sisters and noted Hoffman’s affiliation with the Reform movement. “I see it as an act of betrayal,” she wrote, “particularly on the part of the liberal Jewish movements who are fully aware that they are forfeiting the rights of observant women who seek to pray together at the wall.”

Hoffman contends that Women of the Wall’s acceptance of the government plan honors the organization’s original purpose. “Women of the Wall is a multi-denominational group,” she explained. “We have a mandate to change the state of Israel – to demand that the state provide for all Jewish denominations.

“Orthodox men and women need to form their own coalition to challenge Orthodoxy on what is ’din Torah’ or accepted religious practice,” she added. “That is a worthy struggle, and, as a Reform Jew, I would support my sisters and brothers with all my heart.  But it would be chutzpah for me or for Women of the Wall to take it on.”

Greenberg said that, as an Orthodox woman, she does not want to pray with men, either. But she also believes that the new section will accommodate this desire. She envisions a separate area for Orthodox women there, possibly curtained off, where they can pray in all-female groups within a religiously inclusive space.

“Instead of dividing us up, the new section will be truly pluralistic,” she said, “where each of us can pray according to our beliefs and yet be together.  That is a real victory.”