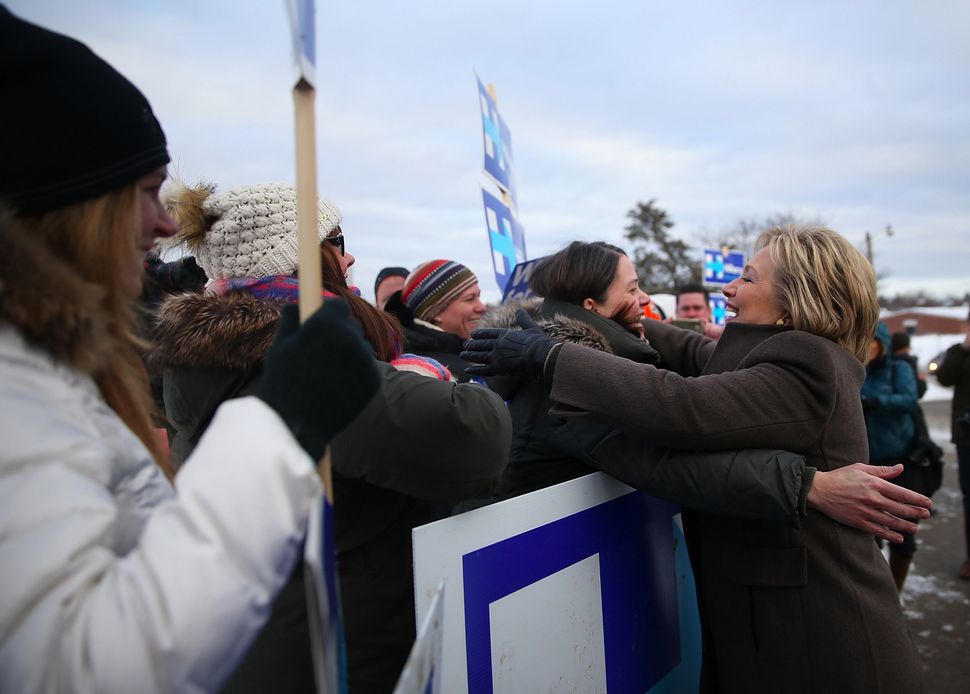 As Sady Doyle points out, it’s a mistake to treat entire generations of women as “a monolith.” Just as some women— such as Stefanie Iris Weiss here — support Sanders despite being older than the much-hyped millennial generation, so, too, are there the occasional members of the supposedly Sanders-loving demographic who lean the other way.

I’ve been trying to figure out how I — not just a female millennial (but 32, which only half counts), but someone who’s basically Sanders’s cultural twin (we’re both secular New York Jewish graduates of the University of Chicago) — wound up as pro-HRC as I have. Granted, there are non-identity-based reasons for this. It’s partly that the issue I care most about, gun control, puts her in the lead for me. On some others, like free college, I prefer Sanders.

But it’s also that something has changed in my feminism over the years, something that makes Clinton appeal to me for feminist reasons. To be clear, that “something” isn’t that I used to select candidates on the basis of impressing guys, and have now outgrown such silliness. I can join the rest of the Internet in finding Gloria Steinem’s already much-called-out remarks — that stuff about young women supporting Sanders as a way attracting young, Sanders-supporting dudes — baffling and wrong. (Well, almost the restn— Jill Filipovic has an interesting take, namely that Steinem was speaking out against “cool girl” behaviors.)

While I’m not exactly joining Madeleine Albright to tsk-tsk people five minutes younger than myself for preferring a different candidate, I think there is something to the notion that a woman’s feminism can change with age. Not that it becomes correct over time, but that the things that jump out are just different at different times — and in idiosyncratic, biography-specific ways that may only gesture at broader trends.

The distaste I used to have for Hillary-as-feminist icon centered on the fact that she’s famous because of her husband’s job. Which she is! Subsequent achievements don’t change this! But my squeamishness has faded as I’ve thought about how many male politicians (Rand Paul, Jeb Bush) benefit from that much nepotism and then some. Life’s messiness — including but not limited to the fact that one doesn’t always have the luxury of turning down a route that comes from connections — is something I’d have found incomprehensible a decade ago.

And there was a time when I’d have found Clinton’s Type A, super-driven persona off-putting…because I’d have associated it with classmates, male and female (but maybe, if I dig deep at whichever internalized sexism, mostly female), who shared those traits. Today, I’ve come to terms with the fact that I’m not and not trying to be the next Sheryl Sandberg, and am able to join in the outrage over glass-ceiling concerns. (Not only those concerns, of course; insert 10,000-word disclaimer here about how elite representation, while not the whole of feminism, does matter, or better yet, read Rebecca Traister.)

And finally, while I don’t, on a personal level, relate to Michelle Goldberg’s narrative about what happens when the office “ingénue” grows up and becomes invisible (either because I’m too young to have had this experience, or because I spent my 20s in libraries writing a dissertation and teaching students even younger than I was), in some more general, women-and-aging sense, I can — as a woman past the ma’am threshold — see her point.

As for why whichever identity-voter part of myself is less moved by the possibility of a first Jewish president than a first female one, it comes down to two main reasons: First, women are half the population. It would be neat to have a Jewish commander-in-chief, but it’s not a sign of something ominous that there hasn’t been one. But it’s also — and here’s where I disagree most strongly with Weiss — that while I’m quite convinced that sexism and anti-Semitism (and the intersectional variety that targets us Jewish women) are both alive and well, I don’t see all that much anti-Semitism in opposition to Sanders, nothing close to the sexism Clinton has to contend with. If anything, his specific style of cultural Jewishness—scrappy, Old-Brooklyn, and almost aggressively powerless, even while seeking the most powerful role in the world—seems to read (at least on the left, at least for now) as endearing.

Explanations of why older or younger women have feminism wrong are generally futile; we all have personal biases conflicting (or, if we’re lucky, converging) with principled stances. There’s not much to be gained from telling younger women that they’re doing feminism wrong by not supporting Clinton, or older ones that they’re clearly not feminists because…of whichever details can be hand-picked to make it seem as if Clinton’s running on a platform of More Nice Things For Fancy Ladies. But there are better and worse ways of making the if-only-I’d-known argument. Better to say how your life experiences inform your thinking than to tell others why their experiences guarantee that their views are wrong.