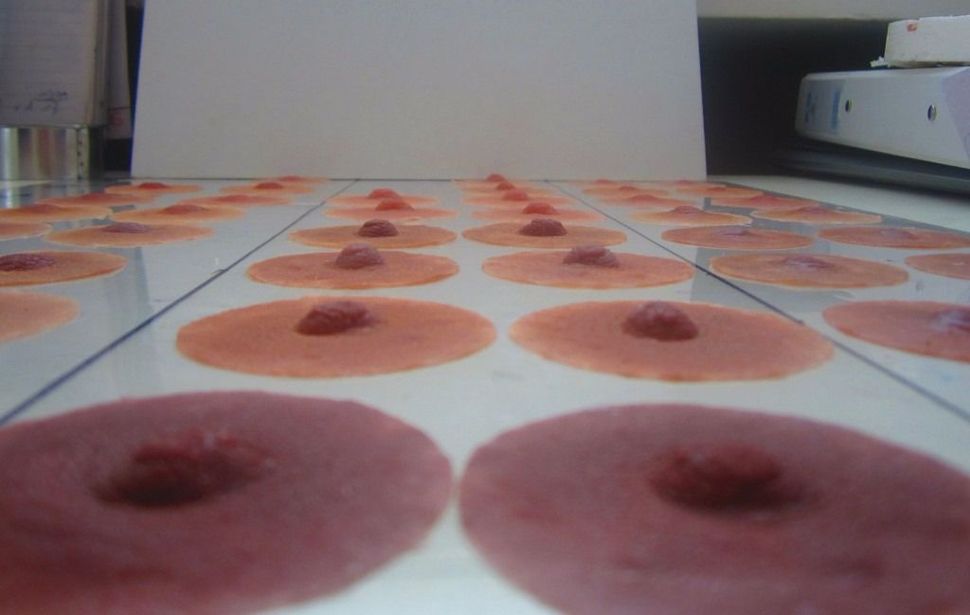 (JTA) — Michelle Kolath-Arbel squeezes a nipple, rolling it in her fingers with a look of mild disgust.

This model, which Kolath-Arbel ordered from China two years ago for $50, is thick and crude and took three months to arrive in the mail.

Kolath-Arbel, 37, was diagnosed with breast cancer in 2010. A year later she underwent a mastectomy and breast reconstruction.

While fighting the disease, Kolath-Arbel says she remained relatively calm, keeping a tight schedule of treatments while holding down a full-time job as production director for an advertising firm. But finding out that her nipple would be removed during breast reconstruction, she broke down.

Searching for solutions, Kolath-Arbel came up empty. Reconstructive surgery would have rendered an unrealistic lump whose color would fade, she says, and the prosthetic nipples she ordered from the United States and China looked fake and rough.

“If I am not for myself, who will be for me?” she said, quoting the Talmudic sage Hillel. She decided to design a nipple herself. 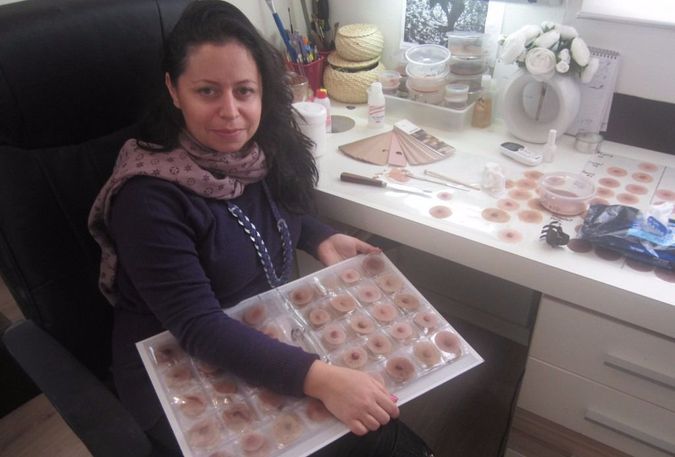 After a year studying with a silicone artist who specializes in prosthetics, Kolath-Arbel made her first nipple. Now she’s doing the same for hundreds of breast cancer survivors in Israel and abroad through the company she founded, Pink Perfect, which she runs from her home in Kfar Saba, a central Israeli city not far from Tel Aviv.

Some 4,500 women a year are diagnosed with breast cancer in Israel, according to the Israel Cancer Association.

“For the first pair I made, I found friends who had also been sick,” she said, sitting next to a binder bulging with nipple types she crafted. “One put it on and started crying. All the doctors said, ‘We were waiting for someone to do this.’ ”

Delicate and realistically textured, Kolath-Arbel’s nipples are surrounded by a semitransparent circle that blends with the skin on which it sits. For women who have undergone single mastectomies, she creates custom prosthetics from a silicone mold of the remaining nipple, matching its shade and that of the surrounding skin by mixing pigments with silicone gel.

To get the texture right, she uses a hard plastic tool she invented attached to a wooden stick. The finished nipple is attached to the breast with a medical adhesive.

Kolath-Arbel says her nipples have become progressively more accurate. She now anticipates the shade changing as the mold dries and knows to make the prosthetic a touch shallower than the real nipple to compensate for the stiffness of the fake.

“She essentially completes our breast reconstruction operation,” said plastic surgeon Yoav Barnea, who directs breast reconstruction at Tel Aviv Sourasky Medical Center. “What Michelle is doing is she provided a solution to build a nipple that looks like the other one in shape and color, and avoids surgery.”

For double mastectomies, Kolath-Arbel offers nipple models made from plastic molds. The models, which are named, vary in size, shade and texture. The most popular is Bold, a light option with a medium, shallow protrusion. Other offerings include Peach, Caramel and Sandy Brown.

Kolath-Arbel says women often seek what they consider an upgrade from their natural nipples, for example choosing a shade they always wished they had.

“I chose something nicer,” said Ayelet Itiel, 49, who underwent a double mastectomy in 2012. “I might as well, as long as you can choose what you want. You have identical, beautiful nipples. People don’t believe they’re not mine when I show my friends.”

Kolath-Arbel has expanded her services beyond mastectomy patients. Her most challenging client, she says, was a 5-year-old girl born without a nipple who likely will be a repeat customer as she grows.

Kolath-Arbel also has provided her services to three men who survived breast cancer. As men are bare-chested at the pool or beach, Kolath-Arbel says, a prosthetic nipple is especially important. But she says they are also less particular about how the nipple looks.

“They’re much more easygoing,” she said. “They don’t care if its the right shade or height. It just matters if there’s something. In any case, the hair hides it.”