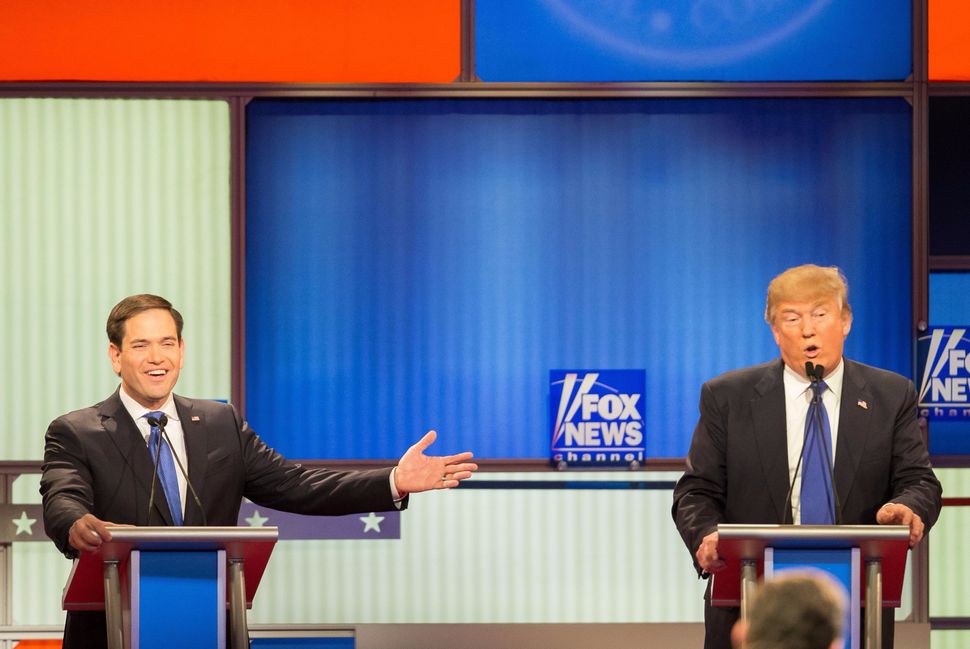 Though I’m no fan of reality television, I am starting to understand its appeal. You’re got your “real” housewives, struggling salon owners, homophobic backwoods artisans, people whose first and last names begin with the letter “K” — and you’ve got the participants of last night’s Republican debate.

As the Republican candidates for president gathered for the eleventh time in a display that the New York Times called vulgar, they debated the big issues. Up for discussion were important political matters including the size of Trump’s hands and a truly stomach-turning moment when he referenced his member (I just had to Purell my own hands after typing that). There was even a lighthearted moment where Ted Cruz attempted to coach Trump through mindful breathing exercises. But where were the important issues? And where were the women?

True, moderator Megyn Kelly of Fox News stepped up. She introduced two devastating clips, the first showing Trump telling Chris Cuomo of CNN that America “made a terrible mistake getting involved” in Afghanistan. “That thing will collapse about two seconds after they leave. Just as I said that Iraq was going to collapse after we leave.” The second clip showed him flatly telling another interviewer that he “never said” Afghanistan was a mistake. Trump responded to Kelly that “on Afghanistan, I did mean Iraq” — even though he’d clearly cited the two countries as separate, distinct “terrible” mistakes. Remember, earlier in the campaign, Trump responded to Kelly’s tough questioning this way: “There was blood coming out of her eyes, blood coming out of her…wherever.” Last night, he was too busy contending with Rubio and Cruz’s increasingly pointed attacks.

But Trump’s earlier allusion to Kelly’s period was telling. If you believe much of the rhetoric spewed by the current crop of Republican candidates, women don’t matter much. The policy issues women tend to consider important aren’t significant enough to talk about, although penis size is.

“The next president of the United States is going to have eight years of a mess of a foreign policy to clean up,” Rubio send last night, “that’s why it can’t be Hillary Clinton, and, quite frankly, it can’t be someone who simply has not shown the intellectual curiosity or the interest in learning about these very complicated issues.” It felt like a combination of a “there, there, little lady” moment combined with Barbie’s declaration that “math is hard.” A slight against a democratic candidate who happens to be a woman, but perhaps doesn’t possess the same intellectual capacity the big boys do.

We’ve been here before. In the second presidential debate of 2012, then candidate Mitt Romney was asked about pay equality during his time as governor of Massachusetts. He responded by using the now infamous meme that he had “Binders full of women” applicants and on file for future positions. It was dismissive. it felt desperate. It cast professional women who make up half of today’s workplace as being something either exotic or part of a quota to be filled in that great big old boy’s network. It also feels as though the Republican party is following in Romney’s footsteps by neither providing a female candidate, nor any strong women role models in the party. Last night’s debate, Kelly notwithstanding, made me feel invisible to Republicans.

And until I find a candidate that actually represents not only my ideology and respects my biology and contributions, I will consider future debates to be entertaining at best, and at worst, a representation of the scary potential outcome of a country that chooses rhetoric over equality.

Rachel C. Weingarten is a Brooklyn native and the author of 3 non-fiction books “Ancient Prayer: Channeling Your Faith 365 Days of the Year” (Fall River Press, 1/16) is available now.