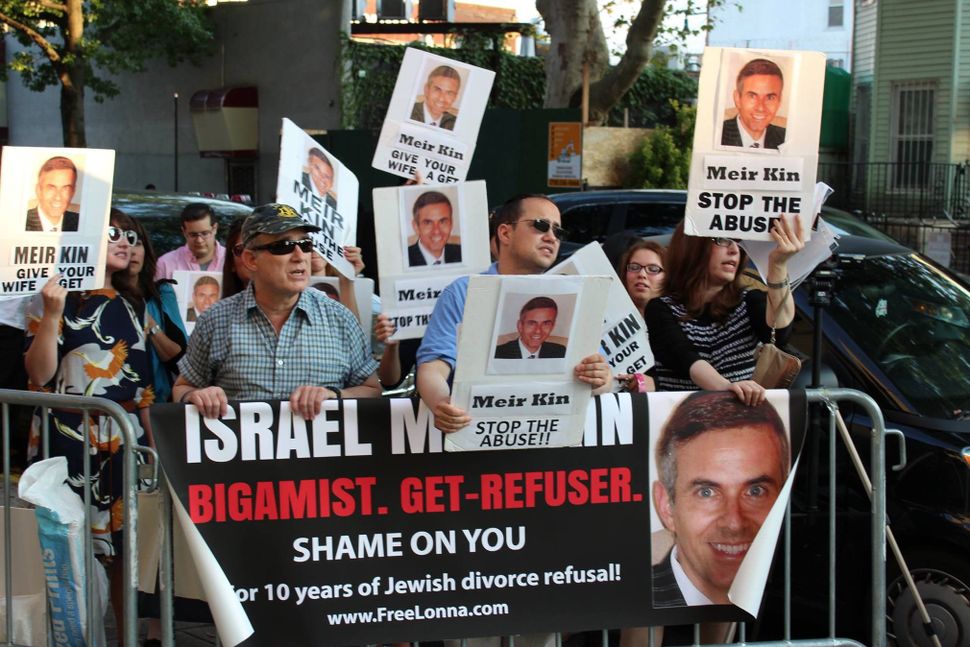 Recently, the High Rabbinic Court of Israel issued an excommunication order against one Oded Gez for refusing to divorce his wife. The Court called on the public to refrain from conducting business with Gez. It stated that no one should host him in their home, offer him food or drink, visit with him if he is sick. No one should give Gez a seat in synagogue, call him up to the Torah, allow him to say kaddish (the mourner’s prayer), or even ask him how he is. And to top all that, the Rabbinic Court specifically authorized posting its ruling, as well as Gez’s picture, on social media. Subsequently, the media has been awash with Gez. According to one report. Bar Ilan University expelled Gez from a position that he held in their institution for Higher Torah Learning in response to the rabbinic order.

In a TV News interview, Rabbi Shimon Yaakobi, CEO of the Rabbinic Courts, noted that Gez has no standing to complain about the onslaught of shaming. Gez, Yaakobi claimed, must take responsibility for his actions. If Gez would give a Jewish bill of divorce (a “get”) to his wife, the shaming would end. When asked why the Court had not put Gez in jail, Yaakobi noted that Halakha Jewish law does not allow for further action at this point. Halakhically speaking, according to Yaakobi, shaming is the appropriate measure, drawing on the shunning tactics recommended by 12th century scholar Rabbeinu Tam.

Shame on us for shaming Gez. And, for that matter, for shaming life couch David Porat (aka Elis Shor). And congressional aid, Aharon Friedman, whose picture was plastered in a DC Subway. In the case of Porat, the shaming “kind of” worked — after eight years. In the case of Friedman who left his wife in 2008 and was civilly divorced in 2010, it did not. To the best of my knowledge, Friedman still has not delivered a get to his ex-wife. Instead, she was declared free to marry another man in a Jewish ceremony after a prominent rabbinic authority declared her Jewish marriage to Friedman null and void. (May such decisions multiply and become the common sense.)

Don’t get me wrong. All my sympathies are with the women who tied their lives to Gez, Porat, and Freidman. I even understand why they resorted to shaming as a means to end the unholy wed-lock of their marriages, putting themselves and their children in the uncomfortable limelight of social media. Halakha, as interpreted today by many Orthodox rabbis, has given them no other choice. Halakha, those Orthodox rabbis claim, does not authorize a rabbinic tribunal to declare a Jewish marriage over. Halakha, the rabbis claim, requires a man to physically deliver a get to his wife in order for her to be divorced. Halakha, the rabbis say, gives a husband the right to withdraw his appointment of an agent to deliver a get up until the moment the get is actually delivered. Halakha, the rabbis assert, maintains that any sexual act between husband and wife nullifies any “conditions” the couple may have agreed to place on their marriage in order to dissolve it without the need for the cooperation of a recalcitrant spouse. And what’s more, the rabbis note, Halakha frowns on any type of persuasion placed on a husband that is not authorized by them. A husband, we are told, must give a get of his own free will. In short, Halakha is stacked in favor of the errant, stubborn husband in a manner that protects his patriarchal control over his unfortunate wife. Most relief or “solutions” that have been suggested to date to ameliorate the plight of an unfortunate wife carefully keeps this patriarchal arrangement intact.

Shaming is a good example of such an imperfect “solution.” Shaming keeps the patriarchal power arrangement in balance. Though shamed, a Jewish husband can choose not to give a get. Like Friedman and Gez have done, to date. Or he can choose to give a get, like Porat did, albeit after eight years. Though shamed, a man is still in control of his wife. The same power balance is maintained when the State imprisons a man for get refusal. If an imprisoned husband wants to give a get, he does. If he doesn’t want to, he doesn’t. One particularly obdurate Israeli husband has been in jail for thirteen years and still has not given his wife a get, mocking his wife and the legal system that supports this arrangement.

Shame on us for suggesting shaming as the “solution” for Jewish women and the problem of divorce. Shame on us for not finding a real solution that takes the power of divorce out of the unilateral hands of men.

And this should not be as hard as it might seem. Instead of offering up half-baked solutions that sustain patriarchal privileges, let’s find a way to directly undermine them. Instead of trying to edit with temerity, let’s cut and paste with aplomb. Jewish women need a way to initiate divorce and have someone aside from an interested, often angry, party — the aggrieved husband — in control of its end.

Let’s, for example, allow for the irrevocable appointment by the still loving groom of an agent to deliver a get in his stead in the case of separation. Or, let’s change the foundation of Jewish marriage entirely to eliminate the purchase ( called “kinyan”) element that underscores it, recreating an “egalitarian” basis for the union. Or let’s condition all Jewish marriages on the requirement that the rabbinic court shall declare a marriage over if a man does not give a get within six months of a civil divorce.

Shaming is shameful. And it’s not a solution for Jewish women. Let’s “cut” out patriarchal marriage and “paste” instead an egalitarian one. We Jews have a history of cutting and pasting and radical reinterpretation when necessary. Shame on us for not finding the will and way to do so for Jewish women.

Susan Weiss runs the Center for Women’s Justice in Jerusalem.