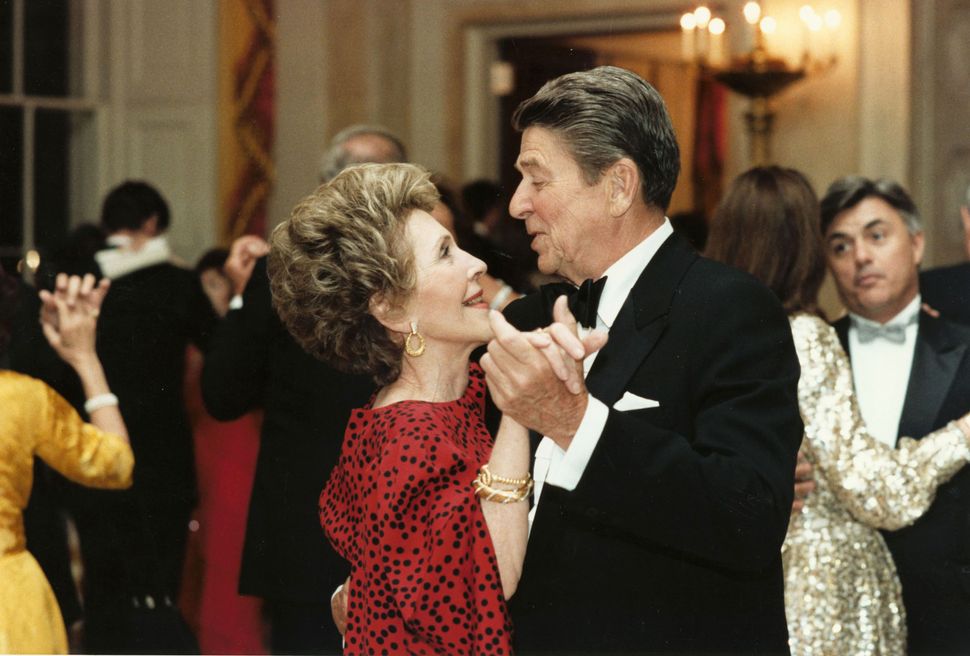 When former First Lady Nancy Reagan passed away on Sunday at the age of 94, she was commemorated in some obituaries as a staunch supporter of Alzheimer’s research and in others as a believer in the unconventional political powers of astrology. But she was most frequently remembered as the face of “Just Say No.” A campaign against drugs, which led directly to the culture, so prevalent on college campuses today, of “Just say no, or yes, or something,” to consent to or reject sex. I hope Reagan’s signature catchphrase will be laid to rest with her—after all, not even the catchiest slogan is enough of a tool to create long-term results.

Reagan learned about the slogan; liked it and hired an advertising agency to create a full campaign around it. The phrase gained traction when Reagan appeared as herself on TV shows “Diff’rent Strokes” and “Dynasty.” Michael Jackson recorded a song, so did sister La Toya. At Reagan’s urging, first ladies from over 30 nations joined in the battle cry, as did both the Girl Scouts and the Kiwanis Club International. Earlier this week, the Today show mentioned there being over 12,000 “Just Say No” clubs throughout the world. But despite the popularity of this catchy slogan and message, absent from the conversation are any kind of measurable results. The issue of consent or just saying no is far from a simple argument. When asked about her connection to “Just Say No” Nancy Reagan said: “If you can save just one child, it’s worth it.” But isn’t that a simplistic way to look at a very complicated issue?

A 2014 article in the Scientific American Journal titled “Why “Just Say No” Doesn’t Work” declared teen substance abuse prevention programs, including Drug Abuse Resistance Education (D.A.R.E.), lack efficacy and actually do “little or nothing to combat substance use in youth.” But the “Just Say No” model proved to be something of a blueprint for similar consent-based campaigns.

It helped shape the movement to end what is now called rape culture. Though the earliest “Take Back the Night” marches and events meant to end sexual, relationship and domestic violence, date back to the 1970s, the concept went mainstream in 1990s. The movement reached its pop culture nadir in 1993, when hit series Beverly Hills, 90210 aired an episode with a Take Back the Night rally as a central event. But the underlying weakness of “Just Say No” as a means to reject peer pressure around drugs is equally ineffective when applied to sexual advances.

For example, the somewhat simplistic website onlywithconsent.org, a resource meant to popularize the notion of consent, recommends that readers “generate consent culture” by “Not raping people.”

In refusing unwanted sexual advances, the common practice has been to train women that no means no. In an academic paper called “Just Say No? The Use of Conversation Analysis in Developing a Feminist Perspective on Sexual Refusal” Celia Kitzinger and Hannah Frith analyze the concept of something called “refusal skills” or realizing that aside from saying the word “no” in negotiating issues of consent or violation, there are sometimes subtler issues to look out for including body language and other ways of expressing disinterest. The authors also cite other studies on date rape education and mention muddled excuses made by men who misread body language and then put the burden victimization on women for not seeming completely disinterested. The flip side of this is that it also potentially assigns men the perpetual burden of unwitting potential predator.

We’ve come full-circle from a generation urged to “Just Say No” to drugs to an aspirational empowerment movement based on waiting for yes; but are any of these pithy exhortations actually effective? Apparently not. The Scientific American Journal article cited above stated that some of the most successful and effective programs that combat drugs are based on a lot more than a call and response of saying no when offered drugs. The most effective programs “involve substantial amounts of interaction between instructors and students” and they can last for years.

So this seems an ideal time to challenge Nancy Reagan’s legacy. An exhaustive report called “Monitoring the Future” included some pretty surprising key findings on drug use in adolescents from 1975–2015. Overall, drug use in recent decades is either declining in younger users or keeping an even pace, but what is rapidly changing and ever evolving are the types of drugs kids are using and the ways that they’re being made, accessed or ingested. From so called “club drugs” including ecstasy and Molly to e-cigarettes, vaporizers or even hookahs, to prescription drug abuse, kids in grades 8-12 were finding newer ways to get high using drugs most of their parents don’t know exist. Perhaps the most effective drug prevention campaign of the future won’t fit on a bumper sticker, but will instead provide long-term education for both kids and their parents so they can collaboratively create a meaningful dialogue instead of relying on trite catchphrases.