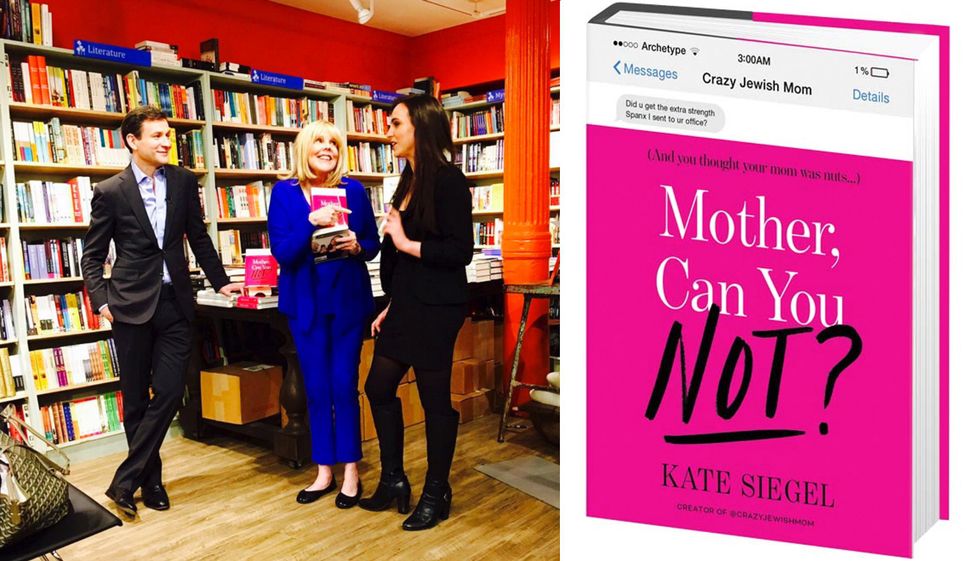 Like many social media phenoms before it, “Crazy Jewish Mom” has become a book. Image by Instagram and kateesiegel.com

Another day, another viral social media phenomenon. Suri’s Burn Book, Feminist Ryan Gosling, Reasons My Son Is Crying — do you recall these breezy, one-joke concepts that ruled your procrastination rabbit holes during slow days at the office?

You laughed, you scrolled all the way through the archives, and you shared posts with friends. Then, poof – all the new updates started to sound alike, the accounts’ authors landed book deals, and the magic suddenly vanished. Your favorite posts now immortalized in a tome sitting with a bunch of similar books on your coffee table, you flip through the thing about once every two years thinking to yourself, “Man, remember 2011?”

“Mother, Can You Not?,” Kate Siegel’s new essay collection based her popular Instagram account Crazy Jewish Mom, will probably join the pile. A little more than a year ago, the 27-year-old debuted the daily chronicle of her mother Kim Friedman’s neurotic, overbearing and exacting text exchanges.

There’s the stereotype of the obsessive Jewish mother … and then there’s Siegel’s mom, a helicopter parent from hell who seemingly uses any correspondence with her daughter to drive her grandchildren-pushing agenda. In a barrage of screenshots, Siegel pulls us into a horrifying world where she’s harangued to constantly watch her diet, focus on her biological clock, and primp in order to be attract a successful, Ivy League-educated Jewish man. (Never mind she’s already in a relationship.)

But what’s meant to amuse and entertain outsiders actually comes across as a stomach-churning display of emotional abuse disguised as intense love. Personally, I couldn’t read more than a few of these snippets last year before feeling like I had to wash the bitter taste of parental narcissism and sexism out of my mouth. Whether 100% authentic or embellished for a growing audience (after all, Friedman was a television director), something just didn’t smell right here.

Given my initial response, it came as no surprise to me that the press release sent out with copies of Siegel’s new book has landed in hot water. Styled in the form of a letter written by Friedman, Siegel’s mother dispenses maternal advice with all the grace and tenderness of a viper. It is addressed all the painfully single, barren women she envisions reading the letter: 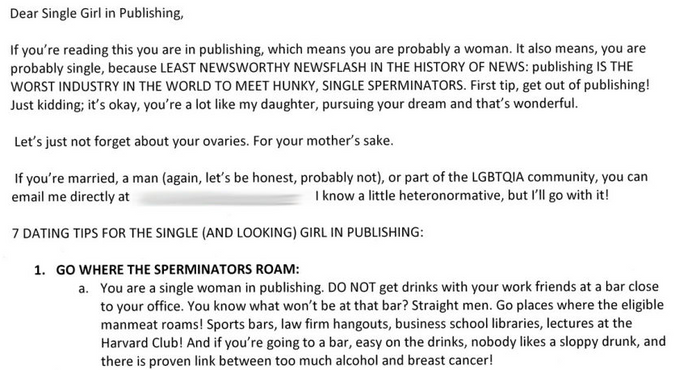 The “Crazy Jewish Mom” has coined her own vocabulary of female desperation, including such gems as “sperminators.” Image by XOJane.com

She goes on to offer seven basic dating tips for all these supposed “single girls” in publishing, reminding them to frequent “places where the eligible manmeat roams,” but if you’re at a bar “go easy on the drinks, nobody likes a sloppy drunk.” The longer you read, the more Friedman comes across as a predatory pick up artist, only somehow worse because the objective isn’t necessarily to objectify, but to impregnate.

Nevertheless, despite a penchant for repeating theatrical (and inherently gross) phrases such as, “manmeat,” “sperminator,” and “sperm donor” in reference to her readers’ potential future partners, her insights are fairly astute. After all, if you are looking to meet your bashert, or true love, you’re probably best off not continuing to sequester yourself inside your comfort zone. Still, it’s unfortunate these words of wisdom are based on a baseless assumption of womanhood in this industry.

If read without the context of the Instagram account, which is based more on carefully-crafted persona than a flesh-and-blood person, it’s understand why such a retrograde tone would offend any media professional or feminist at large. Yet, it’s clearly intended to be tongue-and-cheek. And let’s be honest here: promotional materials are often more than a little ridiculous. (A friend once received a press release for a Downton Abbey-inspired luxury mattress promising you, too “can sleep like the aristocratic Crawley family.”)

Let’s not forget writers receive these messages all day every day: I don’t blame the marketers for wanting to try something that will get people’s attention. Considering some of the greatest figures in feminism were and are Jewish women, I am slightly disappointed that in 2016 a brand steeped in anxiety over the status their daughter’s uterus has proven a cultural touchstone. But I’m not convinced Siegel and Friedman deserve to be skewered for devising such a clever (if annoying) tactic for promoting their business.