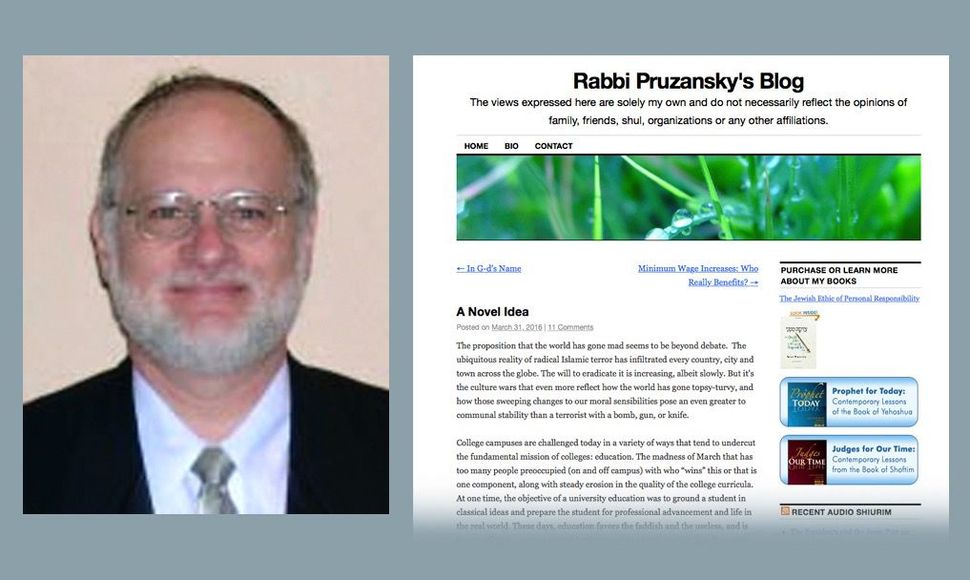 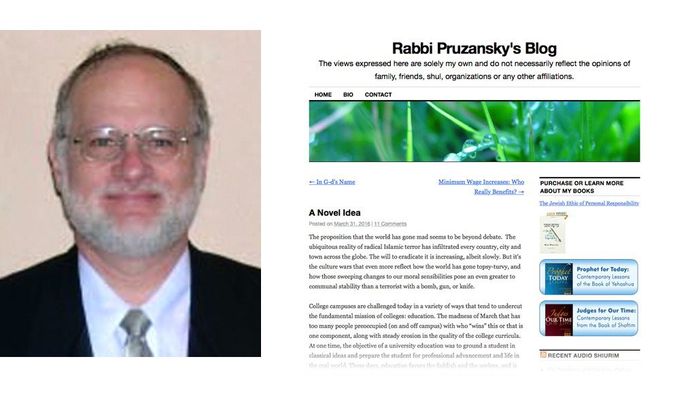 When someone in a public position is known for using his platform to spread messages of hatred and bigotry, there’s an argument to be made for ignoring that person. When that person is Steven Pruzansky, rabbi of a large Modern Orthodox synagogue in a large Modern Orthodox community, there’s certainly nothing shocking about hearing that his latest blog post is controversial. Pruzansky, if you’ve never heard of him, is the type of person who likens everything he doesn’t like to the Holocaust; he’s the type of rabbi whose congregation needs to worry about their security measures because his blog posts can be so venomous that the board of his synagogue worries about violent retribution.

Ignoring someone is certainly an option. But ignoring an article that is so ignorant as to border on actively dangerous didn’t feel like an option to me, not when the topic is something as important as sexual violence. A topic, mind you, that directly affects the approximately 23% of his female congregants who have likely personally experienced sexual assault. For those of you who have not read Rabbi Pruzansky’s blog post on rape culture, I direct you to this link. (Tempted as I was to follow Pruzansky’s lead and put quotes around that which I find skeptical — namely, his rabbinic title — I decided to leave the condescending scorn to those more experienced at it.)

Pruzansky’s article is full of logical holes and ignorant claims, but the problem with which I took most issue was his espousing what researchers today call rape myths. These are common misconceptions about rape and sexual assault, such as the idea that only women can be raped, or that rape happens because a pretty girl wears a short skirt. These myths are markers of dangerous misinformation that can lead to a society in which preventable sexual assault is not prevented due to ignorance. People who work in the world of sexual assault prevention fight every day to correct these misconceptions and spread factual information in their place. This fight becomes more difficult when people with power, people with public platforms — people, say, who are religious leaders of large communities with their own blog — actively spread these myths.

So allow me to address just a few of the many myths that Pruzansky includes as facts in his article. In doing so, I’ve made sure to include just a few scientific studies backing up my numbers, so that I avoid fighting rhetoric with rhetoric:

Just recently, colleges released their latest statistics and the colleges deemed the worst offenders, with the worst “cultures,” reported claims of assaults ranging from 10-20 annually on campuses with many thousands of students.

Ignoring the problem with his implication that 10-20 rapes is an acceptable number, Pruzansky assumes that the number of rapes reported to colleges reflects the actual number of rapes perpetrated. This is far from the truth. To begin with, a study by Koss, Gidyzc, and Wiskiewski in 1987 assessing how many sexual assaults on college campuses are ever reported found that up to 95% of victims never tell police. In other words, if a college has “thousands of students,” as per Pruzansky—let’s say 5,000 in our hypothetical case—and 20 rapes are reported, then there were as many as 400 rapes actually committed that year. This lines up with the other number cited in the (scientific, not rabbi blog) literature (see Fisher, Cullen, and Turner, 2000), which states that between 20-25% of women on college campuses will experience attempted or completed rape during their years on campus; this number excludes men who are raped, but then again, so does Pruzansky’s article.

Certainly, one is too many, but few of these claims involve the old-fashioned and execrable assault by a stranger in some dark alley.

Pruzansky hastens to point out that, contrary to his previous implication, he is actually not okay with even one rape taking place—so long as that rape coincides with a storyline of which he approves: stranger; dark alley; violent assault. A storyline, incidentally, that is so uncommon as to be almost mythical itself. In fact, the vast majority (75%-85% according to the California Coalition Against Sexual Assault) of victims know their assailant. This does not make the rape itself any less criminal, traumatic, or undesired. In fact, in terms of psychological consequences, one could argue knowing your assailant is far more damaging. Pruzansky here sounds an awful lot like he’s discriminating between various forms of sexual assault, some of which he considers more “legitimate,” shall we say, than others.

[M]ost are situations in which the couple had a romantic relationship that went sour after the intimacies in question…Soon after the “friendship” ended, the woman, feeling used, as she was by the lecherous man, files a complaint for sexual assault.

I’m fairly certain that Pruzansky’s argument here is that there is no rape on college campus, only women who have casual sex (which, according to the author, is egregious enough) and then regret it, so refer to it in past tense as rape. In other words, women who cry rape are just crying wolf, as there has been an assault on their otherwise pure, feminine bodies. In fact, the FBI estimates that only 8% of rape accusations are unfounded. The vast majority of rapes on college campuses—those we know of, at least—do not follow Pruzansky’s fantastical plot of regret and remorse, but are instead events filled with confusion, fueled by alcohol or drugs, and utterly lacking in anything resembling consent. I wish I had the space to respond to this part of his argument in more detail, but instead I will just direct you to every scientific study of sexual assault ever.

Also, let’s take a quick second to address his dismissive comment that these “he said/she said” cases usually have no “eyewitnesses or corroborating evidence.” Is Pruzansky saying that in the rape cases he respects—the elusive stranger in an alleyway—there are loads of witnesses and evidence? Because, well, that’s just not true.

If indeed there was a “rape culture” on American campuses no intelligent woman would want to attend college. The fact that more women attend college today than men itself belies the accusation.

Well, this one is just fun because it’s a new one to me. Rape on college cannot exist because women choose to attend college; ergo, the rape isn’t there. I am sorry to be the one to inform Pruzansky that sexual assault happens everywhere, all the time. If women avoided all the places we could possibly be raped, there would literally be nowhere for us to go. Home? Can’t go there— 50% of rapes happen at home or within a mile of home, according to the U.S. Department of Justice. Public? 18% of rapes happen in public venues like parks or parking lots. Women go places where rape exists because rape exists everywhere.

It will solve all these problems, the “rape culture,” the “he said/she said,” the feelings of rejection by the party who had an emotional connection with another person who just sought a physical connection.

What is this miraculous solution? Abstinence. Also known as saying no. Perhaps the author of this blog is unaware that the definition of rape is saying no but being forced to have sex anyway. Of course, insisting that saving sex until marriage will prevent rape also denies the very real existence of rape within the confines of marriage—or rape of married people. Rapists tend not to stop the assault when they see a wedding band. Pruzansky does claim that abstinence until marriage is a fail-proof, historically supported solution. The fact that rape is something that has existed throughout time — including, of course, documented rape within the Bible — seems to puncture a hole or two in this argument.

Men and women should keep their hands off each other unless and until they are married.

This article was so chock full of rape myths that I couldn’t address all of them in one response, though I was sorely tempted. Ignorance is pitiable; ignorance presented with condescending scorn is harmful and infuriating. For someone to flaunt this ignorance and throw air quotes around one of the most traumatizing experiences a person can survive demonstrates a willful disregard for the morality he purports to seek. Only a mad world accepts an article such as his.