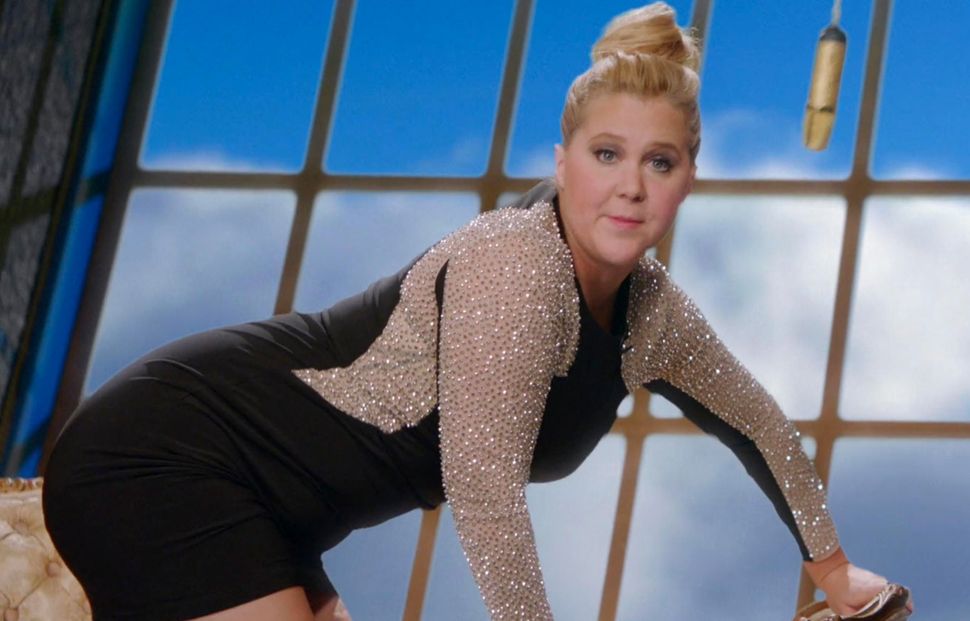 Despite the name of the show, “Inside Amy Schumer” is not supposed to be all and only about her. Image by Comedy Center

“She’s broken the heart of over a thousand men… with her bare hands. She didn’t just take back the night… she took back the whole f—cking week.” These aren’t stale “Chuck Norris facts” from the Internet’s toddler days, but the opening narration of “Inside Amy Schumer” for its surprisingly soggy fourth season.

The show returns to Comedy Central on Thursday and so far it’s a diluted follow-up to the series’ uproarious third outing. In a wobbly cold open intended to send-up a popular beer campaign, Schumer appears as The World’s Most Interesting Woman in the World, a brash and grizzled hellcat who, unlike her debonair male counterpart, faces scorn instead of reverence for her thrill-seeking ways. (Twist! She’s not shilling alcohol, but hospice care for “women who lived like men.”)

Despite the joke’s flat landing, it’s notable that Schumer & Co. choose to blow open their series premiere with what appears to be the comedian’s new mission statement: the recognition of her own current wunderkind status. After an epic 2015 that may well have ushered in Peak Schumer — the critically-lauded third season of her transgressively feminist sketch series, a starring role in the summer blockbuster comedy “Trainwreck” and a well-received HBO comedy special (each of which garnered attention from the Primetime Emmys, the Golden Globes and Writers Guild of America Awards) — it seems Schumer is well aware of her new gig as the real World’s Most Interesting Woman in the World. And her show is now suffering for it.

I don’t blame Schumer entirely for this hubris — after all, self-obsession (especially the grasping, raw, and flagellating kind) has been sewn into the fabric of the series from day one. But “Inside Amy Schumer” has always thrived on her accessible – and often pitiable – regular-girl image. Whether she’s the playing the sexual desperado, the lonesome waif, the embarrassing drunk friend, the Cool Girl, or the dewy-eyed doormat, she manages to skewer both the single woman of the modern imagination and the patriarchal culture that has created her. In fact, she’s at her sharpest when vivisecting the monster from within: an entire Season 3 episode is devoted to an black-and-white “12 Angry Men” pastiche hinging on the question of whether she is, in fact, hot enough to be permitted on television. Yet, while most sketch shows remain rigidly skit-focused, “Inside Amy Schumer” has a freewheeling structure that allows its star’s natural talent for rapport-building to shine in amusing street interviews with non-Hollywood civilians, snippets of her intimate club standup and her empathetic one-on-one conversations with select guests.

Regrettably, the first two episodes of the newest season completely dispense with the street interviews in favor of bland Q&As with her celebrity friends in glittery bars. In doing so, she snuffs out the charm and wit of these unencumbered interactions, instead providing a platform for already-famous personalities to quip on cue. Even mustier are the celebrity guest stars that end up bloating the sketches: in a barely-there cameo, theater juggernaut Lin-Manuel Miranda arrives to merely play MacGuffin for a painfully long “Hamilton” parody that only makes sense if you’re one of the lucky millionaires who have been able to see the venerated rap-musical on Broadway. (I won’t even get into the fantasy football misfire that just seems like an excuse to have some sports star friends on the show.) Making matters worse, Schumer chooses to interview her own personal waxer at the end of the season opener, perpetuating this season’s perplexing focus on her recently elevated celebrity status. And with standup bits centered on Annie Leibovitz photo shoots, it’s difficult to recall the down-to-earth Long Islander Schumer used to embody, as she has never seemed more insistent on showcasing her own upward mobility. “Oh my God you guys, don’t feel bad for me,” she counters to a sympathetic audience. “You know I’m very rich now, right?”

As for the sketches, Schumer seemed to be firing on all cylinders last season, with memorable shorts such as the truth-bearing “Last F—ckable Day,” the catchy teenybopper tune, “Girl You Don’t Need Makeup,” and the delightfully scatological, “Milk Milk Lemonade.” This season, however, we have a retread of men-are-from-Mars, women-are-from-Venus relationship politics with a crawling Sports Center-like lampoon “Not Fooling Around Chicken,” and a middling music video on the concept of losing one’s identity in a heterosexual relationship (by literally taking on the male identity of your partner.)

All is not lost. Historically, Schumer’s best work spotlights the female body as a political and social battleground, and in the most cutting vignette of the premiere, Amy plays a woman awaiting a pap smear at a local clinical when a bevy of old suits arrives: “We’re the House Committee on Women’s Health!” They proceed to interrogate her about her lifestyle, increasingly incredulous (and disgusted) at her status as a childless, unmarried and sexually active woman in her early thirties. A worthy successor to last year’s brilliant birth control sketch, there may be no other television auteur who so expertly nails the rampant misogyny and paternalism that our legal system disguises as scientific inquiry.

Equally entertaining is a fake commercial satirizing Activia yogurt and the idea of purchased empowerment. “Yo-Puss” purports to remove the natural aroma of women’s genitalia within “34 business weeks.” The genius of this sketch isn’t that the yogurt will make her taste differently, like a dessert, but that it completely neutralizes scent together — creating a tabula rasa. Identity erasure is also prominent in one sketch that imagines “Guygles,” a Google Glass-like product that helps women understand the personas they should embody for men to take them seriously: “Flirty victim, spunky kid sister, nurturing mother (but flirty), wounded skank, step-MILF, sexy sex kitten, flirty sex kitten, flirty friend of mum, manic pixie, or Amy Adams!” Just when you think the piece ends on the impaling of ego-starved braggadocios, it contorts into a pointed commentary on the intersection of race and gender that the show rarely touches upon. Given recent accusations that Schumer’s comedy is racist, this seems like a calculated move to thwart the critics. And yet, it also underscores the nucleus of her comedy — Schumer doesn’t just position herself or her coarse persona as the joke, but excavates every crevice of the funhouse we live in, turning the distorted mirror back onto us.