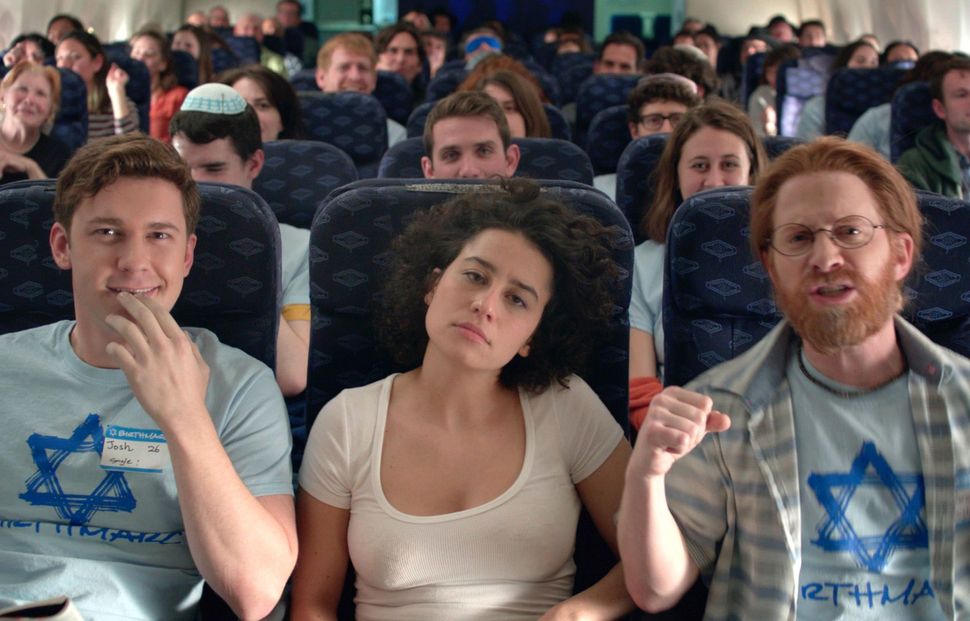 As people of color continue to lunge against the tide of Hollywood’s systemic discrimination, the past three years of television have borne witness to a revolution of representation for a different hidden-in-plain site demographic: Jewish women. While the 1980s and 1990s ushered in an era of highly visible Jewish performers and programming, from Seinfeld to Mad About You to Friends, the Jewishness of their characters was always implicit, disguised in the characters’ behaviors, interests, and lingo. (One-part male neuroses and diffidence, two-parts female manipulation and materialism, a sprinkle of Yinglish and presto: Jewish-ishness.) Even Everybody Loves Raymond, conceived to be about an Italian-American family was ostensibly Jewish, creator Phil Rosenthal once admitting Marie Barone was modeled after his own mother.

But not anymore. Between Transparent’s meditative exploration of Judaism and historical identity, Crazy Ex-Girlfriend’s struggle to break free from the rigidity of achievement-oriented Jewish parenting, and Broad City’s absurdist portrait of the modern Jewess stoner, Jewish women on television are no longer relegated to the shnozzy Queens belle Juive stereotype or her shtetlized mama. And yet, watching a facsimile of my self – a contemporary, feminist, Millennial Jew – in these characters has been both electrifying and also a little bit terrifying. (“Always tell them you’re English,” my wary father warned me in middle school.) As antisemitism around the world rises, the fact than an episode of television could end with the invigorated, fist-pumping, nearly jingoistic chanting of “JEWS! JEWS! JEWS!” is both a luxury and a chilling reminder Americans live in a time and place where such a sight is comedy, not tragedy.

But on to the fun stuff!

Last week’s episode of Broad City concluded on the most promising of cliffhangers. After a hilarious and nail-biting race through NYC while our heroines Abbi (Abbi Jaconson) and Ilana (Ilana Glazer) rush to catch their mysterious flight, they make it on the plane with only minutes to spare. Fastidious traveler Abbi is forced to send her carry-on to cargo, while human Animaniac Ilana, who left the house without her passport, merely hands her bag to the accommodating stewardess. (Luck always strikes these two inversely, a nod to their comedy’s Vaudevillian roots.) As they stroll through first class admiring the extravagance, the curtains to coach open, revealing their fate: they’re flying to Israel courtesy of a free “Birthmark” trip. YAS QUEEN.

What follows in glorious season finale “Jews on a Plane” is a rapid-fire, gag-after-gag skewering of Jewish tribalism, Birthright, and all the program’s famed foibles – the yenta-like hippie trip leader (marvelous guest-star Seth Green, my first celebrity crush), a creepy obsession with ensuring the Jewish bloodline (seating arrangements on the plane are designed by “match potential,”), and the shallow longing of disconnected young Jews to find a spiritual foothold in Israel (or, as Abbi so eloquently puts it, “Africa for Jews.”) The Jewish-American cultural details are so fine, so meticulous, it’s a wonder what may be lost to a gentile audience who may not recognize the accuracy of the spiral, crocheted kippah, the nonchalant passenger eating tuna directly out of the can, or the prevalence of gawky, ginger frizzos amongst the group (two of whom meet and become engaged before they even land in Israel.) One of the running jokes of the series involves Long Islander Ilana teasing Philadelphian Abbi about her “Colonial Jew” WASPiness – and this episodes spares no punches for Abbi, who doesn’t even know what a mohel is. “Honestly, are you Jewish?” her her BFF snips. (Ilana’s comfort with and inhabitance of her own Jewishness may be the one facet of cultural capital she has over her slightly more put-together friend.)

The story eventually erupts into the show’s typical surrealism, as Ilana joins the “mohel-chai” club with Jared, their redheaded, bearded, and pony-toiled group leader, and Abbi experiences the sudden flow of the Red Sea, necessitating an emergency tampon search since her bag as now at the bottom of the plane. The episode climaxes on a Jewified Die Hard parody, with the adventure-starved flight attendants (Tracee Ellis Ross and Tymberlee Hill) charging at Abbi and Ilana in a case of mistaken terrorism. After a heated interrogation with Israeli soldiers, they’re shipped back to the U.S. without ever having set foot in the Holy Land. (Alas, while an Israel-set episode would have been epic, the show unfortunately had to cancel filming there due to ongoing violence.)

Of course, only the delightfully subversive Broad City would turn menstruation into a terrorist plot, a rather pointed feminist flip-off to the tenets of unclean womanhood in Leviticus. The only thing that would have made the episode any more cutting would have been a reference to the recurring controversy of Haredi gender discrimination on flights, but I’d take the sight gag of a man stuffing peyos in his ears like earplugs over that any day of the week.