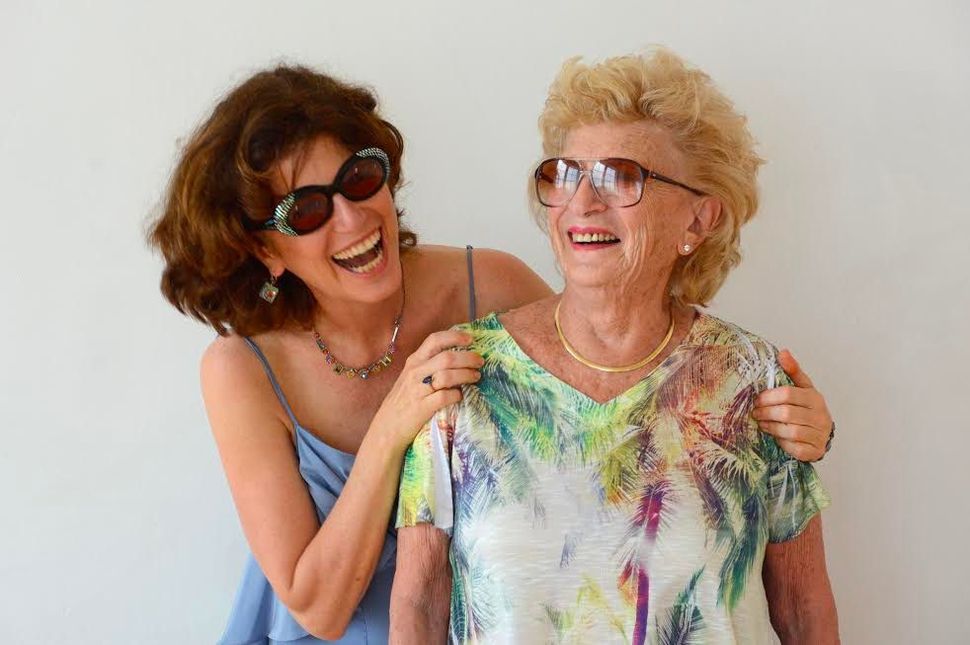 Many of us have, shall we say, challenges in our family relationships — and memories from childhood that are more brutal than blissful. Most of us work out these sorrows and struggles in journals, in therapy, or perhaps over wine with trusted loved ones.

Gayle Kirschenbaum took a road that’s surely less traveled. In the process of sorting out familial difficulties and working toward forgiveness — especially regarding her mother, Mildred — she used painful childhood photos and film clips, plus current-day footage of Mildred and herself in sessions with family therapists, and put it all into a documentary film.

“Look at Us Now, Mother” has been screening around the world, winning awards at film festivals and gaining enthusiastic reviews. But viewers who’ve chosen the private-drinks-with-friends route in addressing their own issues may cringe at the film’s publically aired critiques — such as one of Gayle’s friends describing Mildred as “intrusive, disrespectful, and scary”; Mildred’s cousin describing her as “stuck up”; or Gayle’s older brother admitting that he’d pitied Gayle when they were children due to how she was treated.

And these discussions aren’t confined to the screen. At a recent Q&A following the film in New York, Gayle — with Mildred by her side — said that she “had no advocate” in her childhood home, “was a pin cushion” in her family, and had developed PTSD from these experiences. Mildred, meanwhile, pointed out that when a child does well, the mother is not credited; but when a child stumbles, “everything is the mother’s fault.” She added that when Gayle could not find childhood diaries she wanted for the film, “Of course I was accused of throwing them out.” (Gayle says she did not accuse her mother of throwing them out. The diaries eventually were found.)

A bit frightened of what I might hear, I nonetheless had to raise my hand at the Q&A and ask Mildred if anything revealed in the film simply made her angry — a response many parents might have. Her response was the last thing I’d expected: “I have been lying like a bandit about my age, and now everyone knows the truth.” (She’s 92 — sorry to repeat it, Mildred! — but looks at least ten years younger.)

In time for Mother’s Day and the film’s opening in theaters on Long Island (where the Kirschenbaum children grew up), I spoke with Gayle — this time without her mother present — about her unconventional path to forgiveness and her how her family is faring today.

Pamela Rafalow Grossman: Did this film turn out the way you envisioned it? Or did it take other turns along the way?

Gayle Kirschenbaum: It is what I envisioned. It was my path, my purpose. And it has turned out even better than I thought in terms of audience reaction.

When I started making this film, my journey toward forgiveness with my mother had already begun. I had to decide how to take my audience back in time to experience my childhood. When I reread my diaries, I relived the trauma. I ended up experiencing the sicknesses I’d had as a kid but had never had again since I’d left home for college.

I ultimately took over editing the film myself [after having hired other editors] — it was too dark, and I did not want my audience to slit their wrists. Mom today is a laugh a minute, and I can be irreverent. And I am a firm believer that humor is healing.

Were you worried about how your family would receive this film?

I was concerned about offending my brothers more than my mother. She has a thick shell and was on this journey with me; my brothers only did the interviews for me. I knew I wasn’t going to show anyone in my family the film until I was completely done and happy with it. I would be too influenced by their opinion. One of my brothers, having not seen the film, was quite concerned and having second thoughts about being in it. He had no idea what I was creating and using from his interview. I understood his concern, as he is a public figure in his field and did not want others to know about his dysfunctional family. Of course, I also know that most families are dysfunctional. However, I did not want to hurt him. I did revisit the film, and I made some changes. I removed some his sound bites that were not necessary for the story.

In the end, I think my film has brought our family closer — or, at least, it has brought me closer to them. I’ve always been “the artist” in my family. One of my brothers is a doctor, and the other is a lawyer. They’ve lived more traditional lives. Perhaps they see me a different light now, given how audiences have reacted so positively to this film.

My mom sings my accolades about this movie. She seems to be quite impressed with how I blended the old 8 mm footage with today’s footage. My middle brother told me, some months after he saw it, that he realized: When we were growing up, I couldn’t do anything right, and he couldn’t do anything wrong. I was impressed by how, today, he could so insightful.

During the making of this film, I realized I also needed to forgive my father [who died in 2006] and my brothers, and I was able to do so.

Some of what is presented in the film and even in interviews can be startling. I heard you refer to your mom as “a narcissist incapable of change” when she was sitting right next to you. Can you say something about how this kind of communication seems to be acceptable in your family?

[Laughing] My mother is a different breed from anyone I know. When I released the precursor to this movie, “My Nose” — about my mother’s relentless campaign to have me get a nose job — in December of 2007, the “Washington Post” Style section’s cover article began with, “Whatever your holiday woes this season, be glad you don’t have a mother like Gayle Kirschenbaum’s (and if you do, get thee to a psychotherapist).” When Mom read that, she said, “Bad press is better than no press — I’m on the cover of the “Washington Post”!

It is not unusual to be misquoted by the press, and that has happened many times. However, only one article [about this film] — that misquoted me over and over again and painted her quite badly — she was not happy about. She has been fine with most of press.

I was sitting with one of my brothers and my mom in Florida — I looked up the definition of “narcissist” on my phone and read it out loud to her. And she was fine with it! She owned it. She loves attention at all costs. It’s a different kind of wiring that she has.

And really, a lot of people coming out of this movie are saying my mother’s a star and loving her. She is one of the funniest and smartest people I know.

Some people say they can’t forgive without a genuine apology from the party that has hurt them. Do you agree?

No. I believe you have to find forgiveness on your own. A lot of people struggle with it, but it’s possible. Many people who do mean, hurtful things to others are hurting, themselves, and acting out of fear and anger. They are wounded children who are desperate for love and attention. Or they are people who are suffering from mental illness. In either case, they are damaged. And you need to look at that person differently in order to forgive them. You need to reframe how you look at her, or him, and to see that person as a wounded child who doesn’t know any better. Don’t expect them to be an introspective person or to acknowledge what they have done and apologize. In many cases, they are clueless about what they have done.

What are your hopes for the future of your family?

It’s already happening, now. There is a closeness that is growing.

In general, though, a lot of things have really strengthened and improved with my family. My brothers admire the film, too. I had no idea how things would go — but I believe it brought us closer.

Pamela Rafalow Grossman’s work has been published in Salon.com, the Village Voice, Ms. magazine, and Time.com, among other outlets. She lives in New York City.