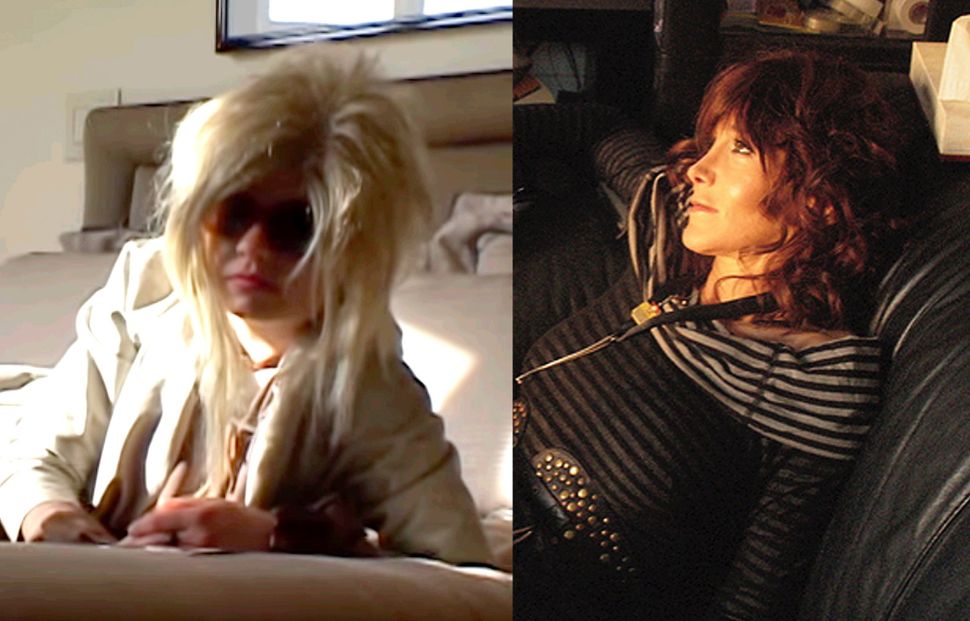 The truth of fiction is that it is all lies. None of it happened. It was all made up. Of course, we don’t think of fiction in these moralistic terms – after all, we’re complicit in the exchange. People wouldn’t spend billions of dollars annually for their eyeballs to suck in candy-colored CGI fantasy worlds if they didn’t crave a little escape from the mortal coil. So if we consent and enjoy being lied to — is it truly a lie?

This is the sticky, multilayered question at the heart of Author: The JT LeRoy Story, a fascinating, unsettling and frankly, flabbergasting new documentary from director Jeff Feuerzeig. You see, twenty years ago a literary wunderkind emerged from the American underbelly and was quickly anointed the new celebrity “It Boy” with memoirist tales of his truck stop prostitute mother and the horrifying abuse he endured in her care. JT LeRoy — painfully shy, gender-fluid, HIV positive — became a fixture in the minds of 90s-era writers, artists, musicians, actors, and filmmakers who embraced his words and invited him to join their Bacchanal. At the turn of the Millennium, with his gut-wrenching books Sarah and The Heart is Deceitful Above All Things, LeRoy was the epitome of iconoclastic cool.

It was all too good to be true… because it wasn’t true at all. The person who wrote these autobiographies, or rather, novels, wasn’t a blond-and-blue-eyed teenage boy from West Virginia but a Brooklyn-born Jewish woman by the name of Laura Albert. She created the character and then embodied him, first in herself through phone calls to psychologists and authors she admired, and then in her younger sister-in-law, who carried on the charade in wig and sunglasses for years at public appearance with nary a suspicion. Everyone — fans and celebrity friends alike — believed the Emperor was, in fact, wearing new clothes.

It’s a story stranger than fiction, and Feurerzeig deftly unpeels the layers of this mystery — not the mystery of LeRoy’s real identity, but why and how he occurred in the first place. After refusing to appear in Marjorie Sturm’s 2015 documentary The Cult of JT LeRoy, Albert provides her account front-and-center in Author, combining an intimate eyes-into-the-lens confessional with personal recordings of her performing as LeRoy to unsuspecting others and decades of video footage. In a vibrant style visually and thematically reminiscent of last year’s impressive coming-of-age drama Diary of a Teenage Girl, we are put in the position of parsing through the words of a vulnerable person insistent on believing her own justifications and denying the consequences of her actions.

To Albert, dressing up her partner’s sister to play an abused teenager was not a cruel or self-aggrandizing hoax, but a metaphor. She bears all to the camera, explaining how she, too, was sexually abused as a child, causing her to want to shed the feminine identity that drew her to this family friend in the first place. She wished for herself lithe, male, and Aryan features, ones that could erase her shame and provide her power. At the age of 28, overweight and having struggled with mental health issues that placed her in hospitals and groups homes through her teen years, Albert invented LeRoy while living lost in San Francisco. As she explains, he wasn’t a character but an extension of herself, a way for her to disassociate from the body that caused her psychological pain and channel her feelings in a new way. As you watch Albert emote, you question what it means to invent and inhabit characters (aren’t they all aspects of an author’s psyche?), but are also reminded this is a woman who manipulated thousands into believing she was someone else entirely. Is she an unreliable narrator at her own podium here or a woman who challenged the conventions of art? Is Laura Albert playing contrite, unguarded “Laura Albert”?

My father used to say that a story is always better if you know it really happened, and I’ve so far been unable to prove him wrong. So perhaps the context of an author is as important to the story as the words themselves — and the tale of JT LeRoy the character is more compelling than any fiction pursued in his name.