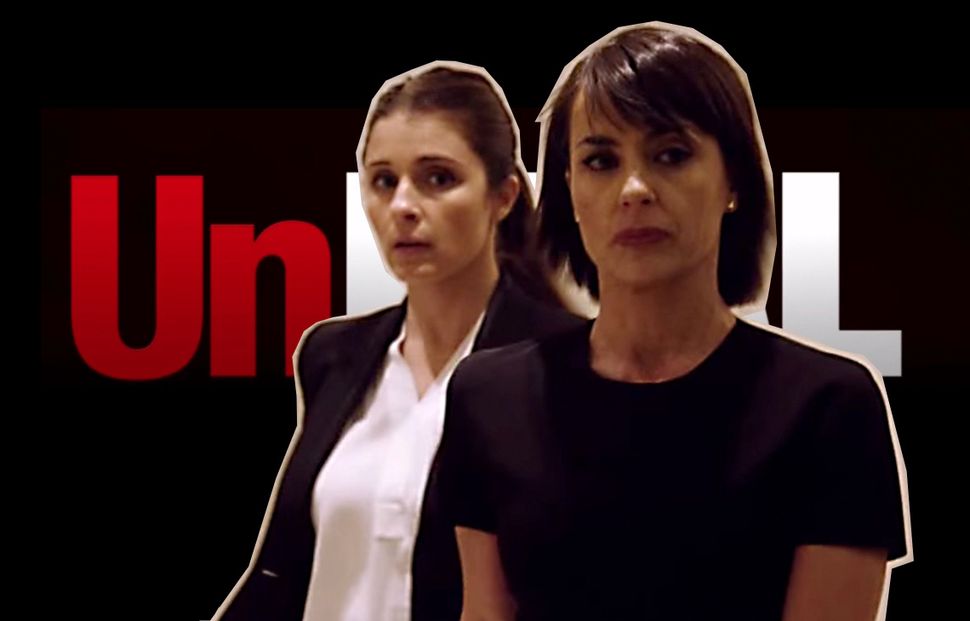 One minute you’re getting matching “Money. Dick. Power” tattoos with your boss-slash-best frenemy. The next minute, the last part of that mantra comes back to bite you after you both vie for it and lose. Just another day in show business, right?

So begins the second season of “UnREAL,” which premieres today. The show smashed the airwaves last summer like a freight train hauling viscera-soaked sequins. Continuing its exploration of women’s authority in a male-dominated industry, the most bloodthirsty, blindsiding roller coaster on air right now isn’t one of the endless serial killer-themed procedurals or ruthless male antihero sagas, but a Lifetime drama about the art (and artfulness) of creating television. After a smart, cutting, and Peabody Award-winning first season, sophomore opener of “UnREAL” nosedives right back into its signature minute-by-minute thriller pacing, delectably unveiling the grime (and bodily fluids) behind America’s favorite squeaky-clean fairytale reality series.

Shiri Appleby stars as Rachel Goldberg, a thirty-something bipolar producer on a “Bachelor”-like dating show whose job is to stir the cauldron and let the camera record what brews. A vocal, east coast-educated feminist, she struggles with her role in proliferating tension and conflict among the female contestants on “Everlasting” – which, as we learn in the pilot, eventually drove her to a reckless, public meltdown in front of the cast and crew. We first meet her at her most vulnerable, slinking back to the set with her tail between her legs to reclaim her job as part of a probation deal. She needs the money; a bizarro psychotherapist with a poisoned honey tongue, the only work she knows how to do is steer people to become their worst selves.

Like “Orange is the New Black” before it, “UnREAL” immediately sucks you, Dorothy Gale-style, through a vortex into its unfamiliar, time-distorted world with new rules you don’t yet understand, swiftly introducing you to a cutthroat culture – in this case, the set of a reality show. It’s a place where the laws of physics become hyper-amplified: for every action there is an equal and opposite reaction, and for every woman who signs up to win the heart of the suitor, there are endless machinations to manipulate and edit her into a “wifey, bitch, or slut.” Sarah Gertrude Shapiro created the series based on her own experiences as a troubled “Bachelor” producer, and it’s impossible to watch “UnREAL” and not imagine the fervent bullying, racism, and emotional violence – inflicted on subjects and staff members alike – is as accurate as any TV ouroboros can get. It’s “The Hunger Games” disguised as a nighttime soap.

The second season wastes no time getting us back into the game: after sabotaging and seemingly outsmarting Chet, the bloated bro executive producer, Rachel and her mentor/BFF/rival Quinn (Constance Zimmer) are set to take over “Everlasting.” More importantly, they’re finally going to grasp the power that golf buddy nepotism had always impeded. In a Vegas hotel room, freshly tattooed and high on their own egomania (along with other substances), they celebrate their newest weapon in the war for ratings: the show’s first black suitor.

“The Bachelor” franchise has controversially never had an African American romantic lead, so this this arc provides rife and never-more-timely material for “UnREAL” this season. Darius Hill (B.J. Britt) is a boyish, hunky NFL quarterback on a redemption tour after questionably using the word “bitch” with a woman reporter. He’s spent his life being a model minority but tells Rachel he feels like a “caged lion.” He’s everything what her dream team is looking for in their history-making lead – but not for any kind of social statement. “I promise you twenty million views the minute he lays his black hands on a white ass,” Quinn gushes to a network executive. “Twitter will melt down.”

Her point of view is gruesome and offensive, but exactly what makes the show’s brutality so watchable: it’s real about its artifice. Few other depictions of Hollywood on screen have ever been this honest about how our bread and circuses are manufactured for mass reactionism. If you don’t want to know how the sausage is made, “UnREAL” is not the show for you.

In order to drum up as much debate as possible for their first season together as executive producer and showrunner, Quinn and Rachel assemble a team of contestants who promise to bounce off each other like a multitude of heated, angry molecules. There’s the Aryan southern belle whose Confederate flag bikini is Insta-famous, a coifed black debutante Rachel nicknames “blifey,” the rebellious daughter of an NFL team owner, a suspicious “Black Lives Matter” activist who knows she’s being handled, and a cunning belle juive who tries to use Jewish sisterhood with Rachel to get more time alone with Darius. But the antics of the set are nothing compared to the vacillating power dynamics behind the scenes when Chet, minus fifty pounds of fat but completely full of misogynistic shit, returns from a paleo cave man retreat determined to “take back his kingdom.” This season already promises to be an old-fashioned battle of the sexes.

The best aspect of “UnREAL” is not just its take-no-prisoners view of what goes on behind the lens, but the characters themselves and the complicated interplay of their hierarchies. Constance Zimmer’s Quinn is a hilarious, sarcastic force of nature, a flinty-voiced charmer who is happy to curl around you lovingly or to let her venom seep through your veins. (“I know you think you’re televising the revolution,” she snipes at Rachel, “But what we need are wet panties.”) Like naïf intern-turned-producer Madison (Genevieve Buechner), she, too, made her bones on the casting couch, but experience has turned her into both a vicious tyrant and a capable television mastermind. She is also a toxic guru for caporegime Rachel, from whom the younger woman takes all her viperous cues when training the next generation. In the premiere’s most effective, heart-pounding scene, Rachel feeds lines to Madison while the girl interviews a traumatized contestant. Like a sadistic Cyrano de Bergerac, while Madison bawls through her words, Rachel instructs her to “gut this bitch.” Afterwards Madison vomits, but returns flush with a new sense of control,. “That was amazing!” This hazing and transformation mirrors what Quinn and Rachel may have experienced the first time they goaded someone into saying something outrageous.

“UnREAL” is one of many shows currently tackling emotional instability in women. From “Homeland” and “Crazy Ex-Girlfriend” to “Lady Dynamite” and “You’re the Worst,” there have never been such wide exploration of women and mental illness on television. However, at its core, “UnREAL” is less interested in pathologizing Rachel’s penchant for exploitation than tackling what it means to be a woman with ambition, period. “I’m not manic; I’m changing the rules.” By the end of the second episode, trust between her and Quinn has begun to disintegrate as their earlier promises to one another lose credit. The combat between men and women on the show may soon be a war between teacher and student. Bring on the psychological gore!