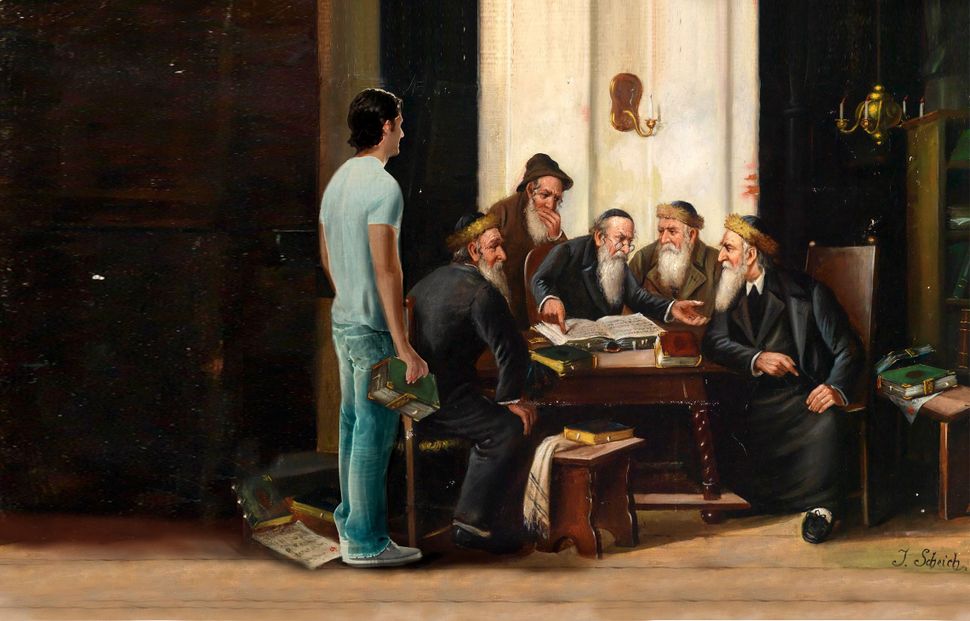 After a decade-long break, I am back to studying Talmud. It was my friend Ben who suggested it, about a year ago. “We should learn Gemara sometime,” he said, using the traditional term for Talmud. It was late at night, and we stood chatting near a Brooklyn subway station, both of us tipsy from a party we’d just left.

I laughed. I didn’t know him well; we’d met only some months earlier, but I knew that he, like I, was ex-Orthodox, and now a nonbeliever.

He made a case for it — I no longer remember what it was, but it must’ve been convincing, because we began soon after, and we now have our routine: Wednesday nights, his place, tractate Sanhedrin, laws of courts. We study for a couple hours, have some single-malt scotch, cook dinner. Full-on, Talmud-themed bromance.

“But why?” another friend asks when I mention it.

I can’t articulate an answer for her, but I know that I am finding our studies strangely, surprisingly meaningful. I have come to realize, it contains an answer to a dilemma I’ve been trying to resolve: How to be Jewish without Judaism.

For 2,000 years, it was our texts, more than anything, that bound us as a people. Our biological bonds were often tenuous. Our religious practices varied. We did not speak the same language, wear the same clothes or eat the same foods. And yet, from the Rhineland to Baghdad, from Italy to Yemen, from the Iberian Peninsula to the Nile Delta, we shared the same texts: the Mishna, the Talmud and. later, their commentaries, handwritten manuscripts traversing thousands of miles and reaching the farthest crevices of the Jewish Diaspora.

For two millennia, our icons were the scholars. “If not for this day,” one Rabbi Joseph says in the Talmud, referring to the day of Shavuot, which occurs during this month of Sivan, and is traditionally held to celebrate the giving of the Torah, “there are many Josephs in the market.” If not for his knowledge of Torah, Rabbi Joseph would be just another Joseph; no other profession could earn him the same esteem.

Not every Jew was learned, but even the lowliest water carrier or illiterate cobbler might, at the end of a long day, listen to a reading of Mishna or the legends of the Talmud; if he could not grasp its legalistic complexities, he could be captivated by its tales, its fantastical musings, its tidbits of historical trivia — real or imagined — scattered between pietistic homilies. For centuries, nearly every Jewish male child could recite at least the beginning of the first passage of Talmud, “From when do we recite the Shema in the evening?”

Today, many of us don’t care about that prayer. Jews in the 21st century are experiencing what is by all accounts a shift unseen since the destruction of the Second Temple. The primacy of the rabbinic paradigm — creed, practice and synagogue; the tripartite nature of traditional Judaism — is no longer relevant to many of us.

But our texts remain — and they remain to all of us.

Ben and I begin with the first chapter of Sanhedrin.

How many judges make up a court? For monetary matters, three. For capital crimes,23. What’s a capital crime, and when can a monetary dispute turn into a matter of life and death? Pages of discussion follow, and in between we meditate on the nature of civil disputes and criminal acts, on the meanings of justice and, particularly intriguing, the damage of slander — one of those things that the rabbis held could go from a monetary offense to a life-and-death matter.

Ben, a scientist who oversees a genetics lab by day, is more irreverent than I, and regularly editorializes on the rabbis’ pronouncements, especially on matters of biology, which is his field. When the rabbis propound that a human body can live with less than a pint of blood, he laughs: “They sound like all those goofy guys who didn’t know anything about science — including Aristotle.” His reverence is there, though, as we slog through pages of the unique talmudic dialectic. “Man, these dudes are on their f—kin’ A-game here,” he muses as we tackle a passage of mind-bending logic.

Talmud study isn’t new to me; I’d spent decades studying it in my religious years, and now that I’ve re-embraced it, it comes to me again fairly easily. This isn’t true, however, for most Jews, and I can’t help wondering why more Jews aren’t committed to textual study — one of the few things that is both uniquely ours and can be embraced equally by men and women; religious or secular; Jews by birth or by choice; Sephardi, Mizrachi or Ashkenazi; “Seinfeld” enthusiasts, or pastrami-on-rye lovers.

Some today worry about Jewish continuity, or the future of “Jewish identity.” I don’t share that worry. My concern is not for the future but for the present. The question, to me, is not whether we will be or not be. The question is how we are now.

And now, outside the Orthodox world or the academy, Jewish literacy is pitiful.

The average American Jewish college kid has likely read some of the Western literary canon, can name a handful of Shakespeare plays, might be somewhat aware of Homer and Aristotle. But how many know of Abaye and Rava, the two greatest sages of the late talmudic era? How many can name the great academies of Sura and Pumbedita, Mechuza and Neardea — where the framework for the next millennia and a half of Jewish life was formulated? How many Jewish children today can recite that first passage, “From when do we recite the Shema in the evening?”?

American Judaism often reduces the vast body of our traditional literature to proverbs and aphorisms unearthed from deep within, so deep that their context is often unknown, their original meanings replaced with a vapid overlay of modern sensibilities, fashionably recasting ancient rabbis as humanists, environmentalists, even feminists. We do this with good intentions — and with profound ignorance.

The rabbis were not progressives; they were products of their time, and that is precisely what makes their discourse fascinating. We have to grapple with ways of thinking that are so far from our own, and still find the resonant chords; make sense of a logical system whose premises are archaic and confounding and dogmatic, but still see its elegance; imagine a world in which life’s mysteries and uncertainties are nearly unimaginable to our modern minds, and still see, in those who lived with them, the same human impulses as ours.

It’s been over a year, and Ben and I still meet each week. My Talmud study is an attachment not to Judaism but to Jewishness. It is not religious, and yet it has been the most authentic and meaningful engagement with Jewishness I have had since leaving Orthodoxy. My synagogue visits are sporadic. I attend Passover Seders eagerly, but they are due mostly to the fortuitousness of plentiful invites rather than to my own impulses. I have not lit a Hanukkah menorah in eight years. But I study the Talmud and its commentaries each week.

It isn’t always easy; the Talmud’s precepts often make no sense. ”One who leaves breadcrumbs on the table, it is as if he has committed idolatry,” we read, followed by, “He who gazes upon immodesty weakens his fertility.”

They have explanations, these bewildering passages, but they require opening our minds and expanding our imaginations. The rabbis were often superstitious, obsessive and maddeningly xenophobic, but their concerns were similar to ours: understanding life, giving our days meaning, grappling with our pasts and, through them, informing our present.

If we are a people, then we have a culture, and if we have a culture, it can be rooted only in that which belongs to all of us. It isn’t gefilte fish, or a popular American song for ”Dayenu.” It isn’t Woody Allen or Jon Stewart. It isn’t Zionism or Yiddishism; it isn’t a set of values, which no one can agree on anyway. And it certainly isn’t some amorphous “Jewish identity.” It can truly be only our intellectual heritage. The syllogism, I admit, is talmudic: I take my premises for granted, and from there the logic follows. But perhaps it is appropriately so. It is just what you get from a year of Talmud study.