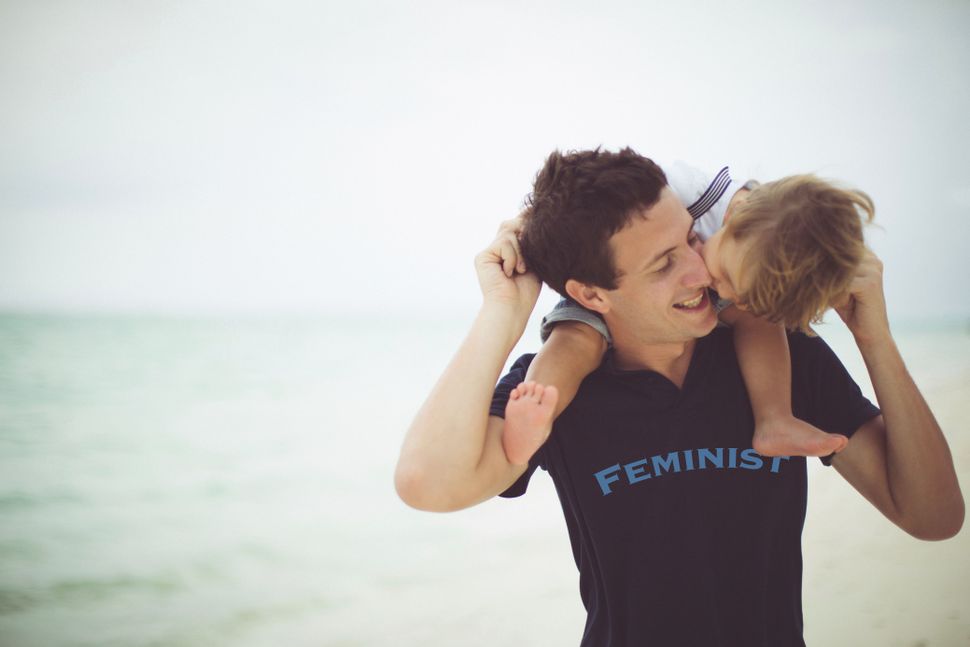 As my dad tells it, my birth coincided with the birth of his identity. A little less than 23 years ago I made him a father, yes, but I also gave him a unique piece of identity that has in some ways been more defining in our father-daughter relationship. My father grew up in northern California during the 1970s, born to two Cal-Berkeley parents who were just shy of making the baby-boomer cutoff; liberals who were a little too old for Woodstock, but not too old to smoke pot. When my dad wanted to channel John Wayne on Halloween, he was forced to carry a sign on his trick or treat bag that touted “I’m a cowboy without a gun, I’m just a peaceful one.”

I’ve learned that some of us grow in direct opposition to our parents while some of us reflect a mirror image. That peaceful cowboy went on to the United States Air Force Academy and served for 20 years. He voted for Reagan, and Bush the first time around. A fairly straight-laced Jewish boy, my father’s first politically radical act came in 1993. Before I was born my father dreamed that his child would be called, “Sam,” irrespective of gender: Samuel for a boy and Samantha for a girl.

This dream was indicative of the coming out that my father would begin to experience shortly. Long before Emma Watson, Beyonce, or Harriette Tubman on the 20 dollar bill, my father became a feminist in the delivery room. He couldn’t imagine anyone ever telling his “Sam” that she couldn’t do anything she wanted, that she wouldn’t make as much money as her future brothers, that she wasn’t as good as all her male peers.

There is a lot of weight that comes from being raised by such a radical, forward-thinking parent. You had to make space for construction toys next to your Barbies, to idolize Batgirl and Wonder Woman alongside Sally Ride and Golda Meir. You had to swim, do karate, run track, play basketball, and also make room for jazz and tap and drama classes. When you couldn’t find a sport you truly loved it was that same feminist father who taught you about Title IX and implored you not to limit yourself to sports with girls’ teams. You were raised a Conservative Jew because your father couldn’t imagine not getting to sit next to you during services, and years later, not getting to see you lead that same service.

Having a feminist father means that you were leaning-in long before Sheryl Sandberg commanded you to and that you always wore the badges of loud and bossy with pride. When your father became stationed in Washington D.C. he bought you a shirt that read “Future President,” a shirt you wore once a week throughout elementary school. He made sure it was a self-fulfilling prophecy as he coached you through your numerous student government and youth group campaigns.

With Washington as the stage, that feminist father made sure that you understood who the women power players were in every facet of life. You learned to worship RBG and be proud of the fact that his state of California was represented by two female senators. You were alerted to every woman who climbed the ranks in the armed services or took control of a defense contracting company. You cheered at how dominant the U.S. women’s soccer team was and your father assured you that their skills could not be rivaled. It was that same feminist father who dragged you to the first black man’s inauguration in 2008 and in the packed metro car on the way home wearily said, “We won’t do that again until it’s a woman.”

I’ve learned that some of us grow in direct opposition to our parents while some of us reflect a mirror image. The most wonderful thing about having a feminist dad means that inevitably you grow up a feminist yourself. When the most important man in your life believes that you can have the world, a funny thing happens where you believe that about yourself. So on this Father’s day thank you Daddy for letting me change you and for loving me in such a radical, equal, way.

Get Dad the ultimate Father’s Day gift by donating in his honor to support excellent independent Jewish journalism — or buy him a subscription with this special offer.

Samantha Levinson is a recent graduate of Indiana University in Bloomington. In the fall she’ll be serving as a Jewish Service Corp Fellow with the American Jewish Joint Distribution Committee in Sofia, Bulgaria.