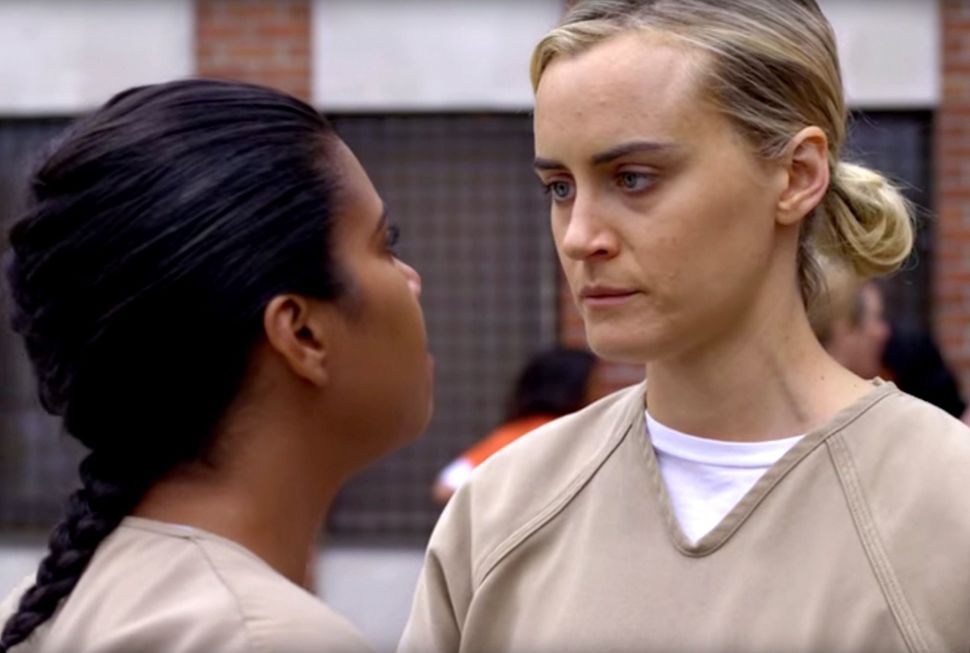 I’ll admit, I’m an “Orange is the New Black” crier. No, “sobber” is probably more accurate. I blubbered through the bittersweet second season finale, hot tears raining down my cheeks as ball-busting Miss Rosa, in a final bid for freedom before she succumbs to cancer, mows down the villainous Vee in a stolen prison van and whizzes off triumphantly to the strum of “Don’t Fear the Reaper.”

The third season ends on a more hopeful note, and once again I found myself full-on bawling to Black Cindy’s soulful conversion to Judaism and the joyous image of the Litchfield women tasting a sweet, brief moment of respite to frolic illicitly in a nearby lake. This weeping is a ritual catharsis season after season of non-stop laughs, thrills and sorrows.

Which is why it’s surprising, following arguably the most white-hot agonizing and emotionally wrecking season-ending twist of the entire series, I could barely muster a tear.

That’s not to say OINTB failed this season. Far from it – even four years into the sweeping story of a cash-poor Upstate New York minimum security prison inhabited by women of all races, shapes, classes and creeds, creator Jenji Kohan still imbues her dramedy with freshness, warmth and gut-busting one-liners. Without a doubt, it remains one of the best series on television and I ravenously ate up the newest thirteen episodes in just two or three gulps. But something feels muted in a bathetic season that explores the crushing nature of guilt, loyalty and racial divide more intensely than any previous chapter. As if the show were suddenly overcome in a fog of antidepressants, the sex has diminished, the jokes have dimmed, and the pain has dulled, ever so slightly. We’ve now entered a new, more politically incisive phase of OINTB: one that takes a magnifying glass to our culture’s racial crisis in this age of documented police brutality, Black Lives Matter, and Trumpism. And our beloved characters burn like ants.

We begin exactly where we left off: The majority of our heroines linger in the spiritually purifying lake, cheerily unaware of the onslaught of new inmates the Litchfield corporate overlords have just slung at them. Alex (Laura Prepon) fights to fend off a correction officer-cum-hired hitman with the help of conspiracy theorist Lolly (Lori Petty, a revelation, but more on that later.) Fan favorite Suzanne/“Crazy Eyes” (Uzo Aduba) soon finds herself lost in the woods with her even loopier love interest, Kukudio (Emily Althaus). Egomaniac Piper (Taylor Schilling) struts around the empty camp believing herself to be Litchfield’s new Big Bad. Meanwhile, perpetually ambitious-but-always-five-steps behind Officer Caputo (Nick Sandow) has officially been named warden. Too soon they’ll all find themselves capitulating, tragically, to their internal and external demons as Litchfield expands beyond its capacities.

The doubling of the prison population is both a narrational blessing and curse. This development provides fantastic, inventive material for the writers as the walls around the women constrict even tighter with the influx of cutthroat new competition. (One zinging episode revolves around a menstrual supplies shortage that renders tampons a new currency.) Yet, while the addition of a half dozen or more new characters proves entertaining – particularly the endearing Dominican toughs Weegie and Zirconia, along with a trio of jokes-on-them white supremacists, one hilariously named Skinhead Helen – it felt crowded enough before on a show built around a large ensemble.

Thematically, this makes sense – get the audience to further empathize with the already overtaxed characters. Practically, however, it’s akin to stuffing yourself at Thanksgiving – it is possible to have too much of a good thing. As the focus shifts to the tyranny of newly-hired behemoth Captain Piscatella (a sanctimonious Inspector Javert-wannabe) and the flitterings of pampered, pansexual viper Judy King (this show’s answer to Paula Deen), we lose sight of our most important players. Put another way: like on Game of Thrones, the more this world swells with stories and faces, the less time we have to spend with each of them. Sadly, this trend extends to one of my favorite components of the series: the flashbacks to our character’s lives before they ended up at Litchfield. These parallel threads appear inconsistently throughout the season, and arrive with varying degrees of quality and insight. Still, keep an eye out for the episodes featuring Lolly, Suzanne/”Crazy Eyes,” and wildcard Blanca (Laura Gómez) – each of whom will break you into a million little pieces by the end of these stories.

Speaking of Lolly, Lori Petty, along with Matt Peters as charming ne’er-do-well electrician Luschek, and Dale Soules as gravelly-voiced biker chick Frieda, are, by far, the comedic stands-outs in a season already heavy with terrific performances. Petty’s comic timing is true art – her manic, assault rifle delivery, served to us in her urban white girl Gen-Xer lilt, provides the heartiest chuckles of the season. Beyond the fun, however, she layers the pathologically paranoid Lolly with so much humanity and doe-eyed innocence, your heart may be full-to-burst at the conclusion of her arc. Peters also gets his own storyline that questions redemption and interpersonal allegiance, and he finally gets to turn Luschek’s loosely-sketched “lovable scamp” of previous seasons into a fully-realized (and fully flawed) human being.

It’s a season that is poignant and timely, with some storylines that eviscerate (confining trans inmate Sophia to solitary as a measure of “safety” – expect an Emmy for Laverne Cox) and others so tick-the-box topical they feel like a wink from an overeducated writing staff (the “West Bunk” standoff between new hijabi inmate Abdullah and recently-converted Jew Black Cindy.) Additionally, the show has a habit of peppering dialogue with oh-so-knowing political references that come off as a bid to enlighten the audience more than a character-building endeavor.

Still, delightfully we see characters paired up in unexpected but welcome ways: Caputo hires Taystee as his assistant, which creates a hysterical dynamic and more opportunities for actress Danielle Brooks to demonstrate her formidable comedic and dramatic talents. In another, smaller storyline, Suzanne/”Crazy Eyes” and Morello, two of the prison’s most psychologically unpredictable residents, team up for a bit of amusing scatological detective work. Unlucky-in-love Poussey (Samira Wiley, always brilliant) finally finds romance with Soso, Litchfield’s naïve Millennial progressive. And speaking of gratifying dichotomies, the final sequence of the premiere features the funniest and best use of Papa Roach’s “Last Resort” I’ve ever seen.

OINTB is a show of contradictions – a heaping meal of opposing flavors, some bitter, salty, sweet, and sour – but I will gladly gobble it down, no matter how the seasonings may have changed. After all, who doesn’t love an elaborately crafted feast for the senses?