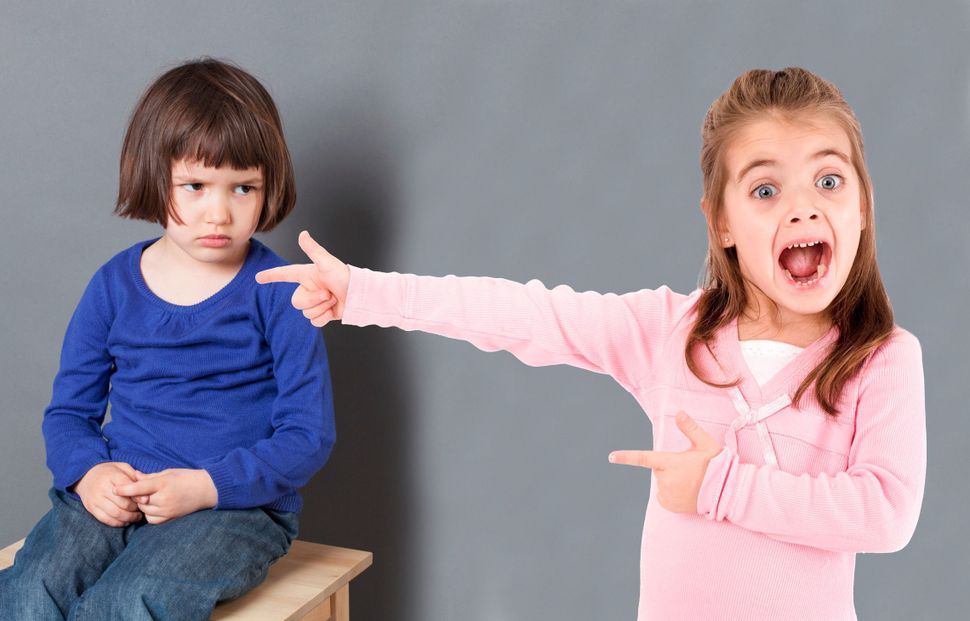 My oldest daughter, who is going on 9, was tossing insults at her younger sister, Moriya, heedless of my exhortations to cease and desist. The usual deprecatory remarks that fly around our Israeli apartment like arrows include “stupid,” “liar” and “crybaby,” in various combinations of Hebrew and English.

This time, though, there was a zinger I had never heard from any of my four daughters before: “hilonit,” the feminine form of the Hebrew word for a Jew who, unlike our Orthodox family, identifies as secular or non-practicing.

Stunned, I turned off the eggs I was scrambling and faced the girls, who were sitting around the kitchen table in expectation of being fed. “Hilonit is not an insult!” I found myself shouting.

This wasn’t the first time we had talked about how different people do different things. Just a few days before, on Shabbat, we were walking home from synagogue, or shul, when Moriya pointed out the cars that were passing us by.

We talked about some reasons that might be. Maybe they needed to get to the hospital just like ima and abba, Hebrew for mom and dad, did on that Shabbat five years ago when Moriya was in my tummy but wanted to get out. Or maybe they don’t observe Shabbat the way we do. Or maybe they’re not Jewish.

While the absence of cars driving around on Shabbat is often touted by Shabbat-observant Jews as a benefit to living in one of Israel’s religious-only communities, for us it’s actually a reason not to live in one.

I want my children to see that not everyone is like them.

In conversations like these, though, I haven’t used the word “hiloni,” or secular, which in Israeli society is about far more than what your Saturday schedule looks like.

In a land in which religion, rather than race, is the primary fault line, “hiloni” (pronounced khee-lo-NEE) is often seen as a core characteristic, a significant component of one’s identity, a demographic name tag. The label marks those who check off the “hiloni” box as distinct from (and sometimes at odds with) those who, like me, identify as “dati,” which means religious but often refers specifically to the religious Zionist population (think crocheted kippah), or as “haredi,” which refers to the ultra-Orthodox (think black hat).

It occurred to me that my oldest daughter might not know quite what “hilonit” meant when she wielded it as a weapon. I went for a relatively narrow explanation of the word.

“Hilonit means someone who doesn’t keep Shabbat,” I said. “It’s not an insult, it’s just a way of describing what people do.”

“And anyway, you know we do keep Shabbat,” I told my oldest. “Why did you even say that?”

That’s when I got hit with the next zinger of the dinner hour: “Moriya’s wearing pants, so that means she’s hilonit!”

In our city, which has a mix of hiloni and religious families with a wide variety of sartorial standards, we know plenty of women and girls who wear pants and are Shabbat-observant. My daughters and I do it ourselves, though we tend to toggle back and forth. They often wear skirts over leggings, but sometimes just the leggings (or the judo or gymnastics outfit, depending on the day, time and kid), while I alternate between skirts and flowy pants.

“You can’t tell whether someone keeps Shabbat just based on what they’re wearing,” I told my kids.

Though I was startled and disturbed to hear my daughter’s remarks – she wouldn’t tell me where she got this from, but it seems likely she picked them up from a classmate, or worse, a teacher – I am glad she brought the subject out into the open.

A recent study in the Journal of Experimental Psychology: Learning, Memory, and Cognition found that it’s a lot harder for people to forget incorrect information when they’ve actively inferred that information themselves – putting together clues and implicit messages to concoct a story that makes sense to them – than it is to forget wrong information that is stated outright in no uncertain terms.

I don’t know if my daughter was explicitly told that hilonit is an insult and that girls who wear pants can’t be religious Jews, or if she made an inference based on other comments she heard. But I do know that unfortunately, these are messages my children may well encounter as they make their way through the Jewish world.

By not talking about it, I would unwittingly have been allowing these unfettered messages to build up into the kind of implied misinformation that can become the scaffolding of an entrenched intolerance of others.

I probably wouldn’t have initiated this particular discussion on my own, though, because it wouldn’t have occurred to me to announce unprompted that “secular” is not an insult. So thanks for that, kid. I’ve found that the big stuff usually isn’t restricted to one neat little conversation, so I’m grateful you kick-started a dialogue that I expect to continue with you and your sisters for many years to come.

Shoshana Kordova lives in Israel, where she is a journalist and house mother to a small sorority’s worth of daughters. She is a former editor and language columnist at Haaretz, and has written for publications including Quartz, Smithsonian, Prevention, The Daily Beast and New York Times parenting blog Motherlode. You can reach her @shoshanakordova.