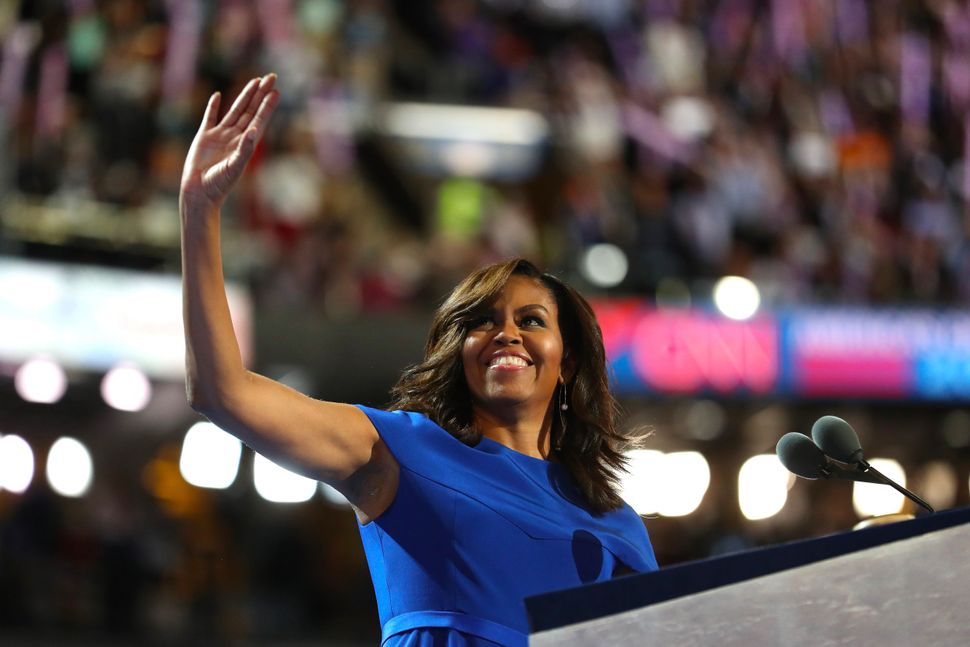 Michelle Obama acknowledges the crowd before delivering remarks on the first day of the Democratic National Convention at the Wells Fargo Center, July 25, 2016 in Philadelphia, Pennsylvania. Image by Getty Images

In the speech, Obama spoke of the importance of caring about the future of the next generation and said Clinton was “the kind of president that I want for my girls and all our children.”

In a widely quoted part of the address, Obama dealt with both the United States’ history of racism and progress.

“…I wake up every morning in a house that was built by slaves. And I watch my daughters, two beautiful, intelligent, black young women playing with their dogs on the White House lawn,” the First Lady said. “And because of Hillary Clinton, my daughters and all our sons and daughters now take for granted that a woman can be president of the United States.”

“So, look, so don’t let anyone ever tell you that this country isn’t great, that somehow we need to make it great again,” Obama said.

Here’s what Jewish social media users had to say about the speech:

Journalist Julia Ioffe took a stab at Melania Trump, whose speech at the Republican national convention last week was revealed as partly plagiarized from an earlier speech by Michelle Obama. In April, Ioffe’s profile of Melania Trump lead to her husband’s supporters bombarding her with anti-Semitic death threats.

Weird. Was hoping to hear something about Michelle’s childhood in Slovenia. #DemsInPhilly

On the ingenious (and scathing) elegance of Michelle Obama: https://t.co/bjt4YCngCt

here, if you live in the wrong time zone and missed it, is the speech of the year. https://t.co/jKXcoFrsWL

Michelle’s speech was incredible! What a beautiful soul/woman/leader/mother. @FLOTUS made everyone proud! Please vote and protect our kids!?

And she wrote it without any help! https://t.co/2q11laLL0c