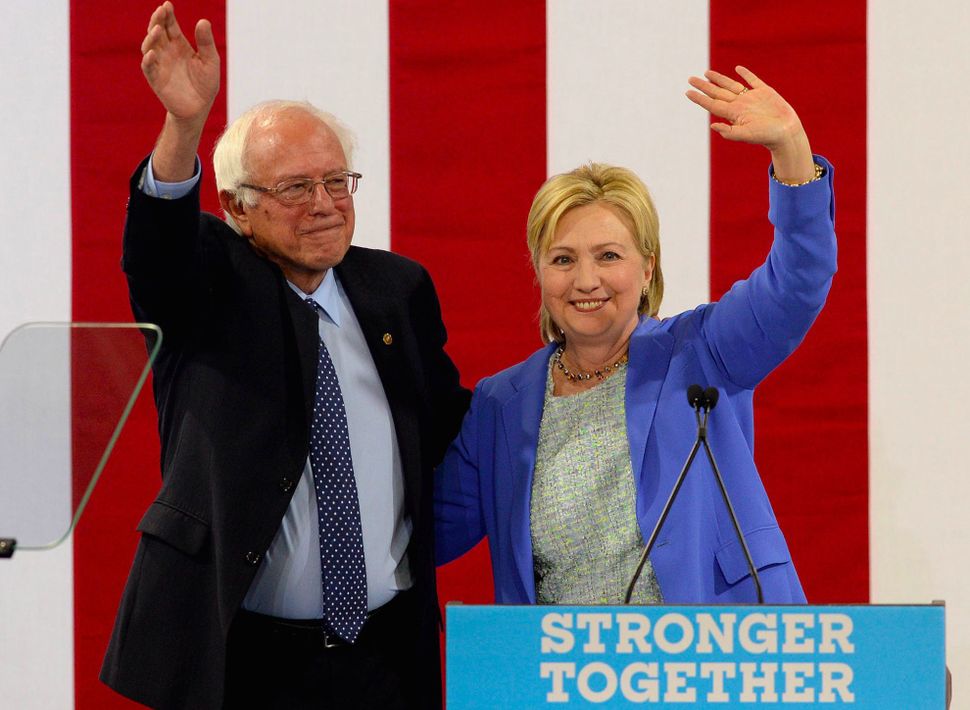 I’ve been a Bernie Sanders acolyte for years, and have watched in awe during the last 12 months as he took his rightful place as the progressive leader of our time. He showed up exactly when we needed him, taking the smashed mantle of the Occupy Wall Street movement and bringing millions of millennial voters along with him.

During this election season, Bernie was my dear, sweet, sometimes grumpy, always brilliant, endearingly accented Jewish grandpa. The working-class man who grew up on East 26th Street in Brooklyn, the same street where three generations of my family lived. The man whose progressive values come from that place: the same place I come from.

When he announced his bid last spring, I was elated. Finally, a presidential candidate who represented me – my lefty, heretofore peripheral point-of-view on the national stage. Here was a man who would speak truth to power, who wasn’t owned by lobbyists, who’d give equal time to civil rights, the environment, single-payer health care, social and economic justice, racism, sexism, homophobia, and neoliberal foreign policy. Even if it seemed like a fringe-y enterprise at the start, I was totally on board.

So when Bernie came onstage on Monday night, I wept openly and I believed him when he said it’s time to support Hillary. I wept again on Tuesday when Tulsi Gabbard introduced Bernie’s name for nomination. I continued weeping when Bernie’s brother, representing Democrats abroad, spoke – and Bernie’s own eyes filled with tears. I really lost it at the end, when Bernie stood with the Vermont delegation, and pronounced Hillary the winner.

I said I was going all the way with him, and I meant it – but now the time has come to take his directive and vote for Hillary.

It’s true – there were uncounted votes and outright treachery by Hillary surrogates at the Democratic National Convention. But still – she won, and it’s over now. This is what happens in elections – people play hard and they often play dirty.

No matter how sad we are, Bernie supporters are not walking away empty-handed. We are walking directly into a political revolution that we built.

Our trailblazing leader won’t sit in the Oval Office, but he will likely go forward as one of the most powerful voices in the Senate. And he has presided over the most progressive Democratic platform in history. That’s a major milestone for the left. This victory is not merely crumbs on the floor after Hillary’s celebratory coronation cake – it’s the real deal.

As the DNC comes to a close on Thursday, I find myself thinking about family dynamics.

From big-D Democrats to die-hard lefties, those that identify as socialist (as I have since I was a pre-teen), activists, social justice warriors, and even center-right Dems who live in the suburbs but believe in civil rights – we need to come together and support each other in order to prevent the apocalypse.

Why is there still so much space between us? Why do we all feel so unsafe in each other’s midst? I don’t think it’s a simple matter of disagreeing with one another on issues. Of course that’s real and must be addressed, but I believe that we’ve been whipped into a fury of fear because of exposure to Donald Trump.

His toxic rage has infected our airwaves and our Facebook walls with hate, which is reminiscent of the 1930s.

For the better part of a year, we’ve been forced to listen to a man who has not just dog-whistled, but openly pandered to white supremacists, a man who doesn’t understand how NATO works, a man who wants to ban all Muslims from entering the United States, a man who believes Black Lives Matter activists are “thugs,” and a man who regularly says deeply offensive things about women’s bodies.

And this is why I’m voting for Hillary. Because I cannot abide the possibility of fascism, and no, I don’t think this is hyperbolic.

If you listen to just about anything Trump has said in the last year, this is exactly what he’s promising: the legitimizing of white nationalism, a Supreme Court full of Antonin Scalia replicas, the banning of reproductive rights, and 24/7 fear and loathing on the streets, just for starters.

90 percent of Bernie supporters just polled will vote for Hillary in the fall.

My friends on the left have wholly legitimate grievances against the DNC and the Clinton campaign. But it’s also true that “Bernie Bros” exist, even though they are few and far between. They have been fed a diet of 25 years of Hillary-hatred, and they are full to bursting with misogyny and unrecognized privilege.

But it is also true that some ardent Hillary supporters have branded almost all Bernie supporters as not-terribly-bright idealists with stars in our eyes. And worse – they believe we’re under the influence of that vast right-wing conspiracy. This must change if we’re to move forward together.

While the rest of us have come to the table, knowing that it may take years for us to resolve our differences, the angriest of the #ImWithHer crowd and the #BernieOrBust folks are still both sitting in their corners with their arms folded over their chests, refusing to budge.

I ask Hillary’s most devoted supporters and her team: please be open to taking your agenda further to the left. Please be more contrite about the ugliest revelations of the DNC email scandal. Don’t brush it under the rug. You may think you’ve already made concessions and apologies, but more are necessary.

And to those of you who are #NeverHillary, please know this. There are millions of people of color, immigrants, and other marginalized groups who are already living in fear. Some of you (not all, of course) come from privilege and have the time and energy to leave your jobs and take to the streets to fight for Bernie’s brand of justice.

When you threaten to vote for Jill Stein or to not vote at all – you’re putting all of your black and brown brothers and sisters in great peril.

I suspect that Trump’s America would be far worse than even the wars and economic crisis that Bush delivered – especially for those already suffering. Is that a risk you want to take?

So get out of your corners, Democratic family. Come to the table, share your grievances, and vote for Hillary in November, if only to save our country from a brink we will not be able to return from. But keep fighting for Bernie’s vision – on the street, in the halls of congress, on your local school board or city council.

The one thing we know about HRC is that she’s not an ideologue – she goes where the wind blows. So let’s shift that wind to the left, and we will have the progressive politics we have long dreamt of.

The rest of us are already at the table, trying to see our way to November and beyond. Trying to preserve the safety and human rights of the most marginalized while fundamentally transforming the system that governs us. We must figure how to do both, or when we get together next Thanksgiving, we’ll all be in mourning.