Why Glamour Is the Perfect Outlet for Obama’s Feminist Manifesto 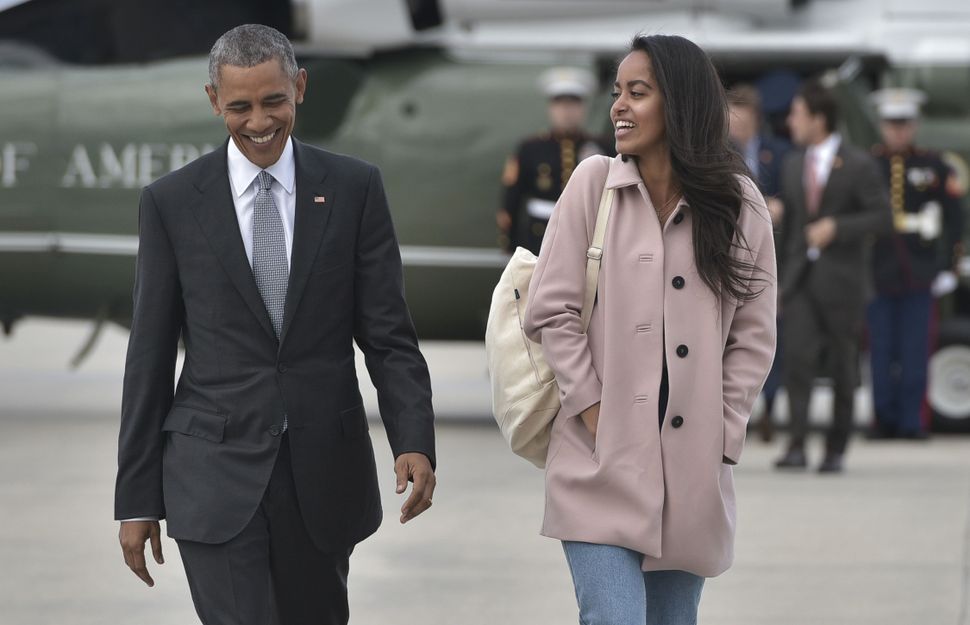 Barack Obama and daughter Malia make their way to board Air Force One before departing from Chicago OHare International Airport in Chicago on April 7, 2016. Image by Getty Images

Obama’s recent personal essay on his feminism was smart and relatable.

While any publication in the world would’ve been delighted to feature an exclusive piece written by the sitting President of the United States, Obama chose to publish his thoughts in a women’s magazine. Glamour magazine, in fact.

And that was an important move.

As far as we’ve come, all too often we are still boxed in by stereotypes about how men and women should behave. — President Obama

Many men and women have criticised Obama’s choice (though notably, not many take issue with the essay itself). While I am sad to see this, it makes sense; growing up, we are told that women’s magazines are a “guilty pleasure,” are “not serious,” and give us “unrealistic expectations about women.”

That last part is certainly true. It is unreasonable for most of us to expect to become anything close to the exemplar of feminism that Glamour’s top executive has become.

The editor in chief of Glamour, Cindi Leive, is a graduate of the top liberal arts college in the world, a New York Times bestselling author, and one of the 40 most powerful people in New York. The magazine she leads also happens to be Conde Nast’s most lucrative.

Glamour has tightened its standards on how much photoshopping is allowed in their magazine, and their last cover featured a makeup-less Mila Kunis. Sure, some of the ads in Glamour magazine are unrealistic. But advertisements in any publication aren’t designed to paint a realistic picture of the world; they are designed to sell things. I’d like to think most women are smart enough to understand that.

At its core, the objection to Obama publishing his piece in a women’s magazine gets to the heart of his essay: in our society, women must simultaneously be everything and nothing.

It is not enough for a woman to be well-read, educated, and successful. If she wants to be taken seriously, she must also not indulge her feminine side: it is fine for men to spend hours and thousands indulging their passions for sports, but a woman who reads women’s magazines is petty, shallow, and self-absorbed.

We need to acknowledge women’s magazines for what they are: the only unifying bipartisan female space that exists today.

Readers of women’s magazines are simply looking for a relevant female first perspective, on all sorts of issues, that other magazines and outlets fail to provide. Look at the masthead of every women’s magazine. Do you know any other profitable news organizations run chiefly by women? There is no space for women to exist as sexual, thoughtful, complex beings in traditional media. There is no space for women to talk about “women’s stuff” — be that sports, politics, news, culture, and yes, at the same time, fashion and beauty — in the public sphere, in the same place, outside of women’s media.There’s a reason these magazines are gaining subscribers while traditional media is struggling.

Even Jewish media, traditionally so progressive, is failing us. While the majority of Jews are not white men, often our publications are nothing but a sea of white bald heads with glasses.

Of course, all media organizations need to push beyond the comfort zone to include more diverse viewpoints from those of different religious, racial, socioeconomic, and sexual identities. And women’s magazines are often a sea of white themselves. But at least in women’s media, women can openly celebrate, discuss, and explore all the complexities involved in womanhood.

So thank you, President Obama, for choosing Glamour. In your choice, you also made it clear that you chose women, with all the contradictions and complexities we entail.

Why Glamour Is the Perfect Outlet for Obama’s Feminist Manifesto