On the Jewish Valentine’s Day, Creating a Crowdsourced Map of Jerusalem’s Love Stories 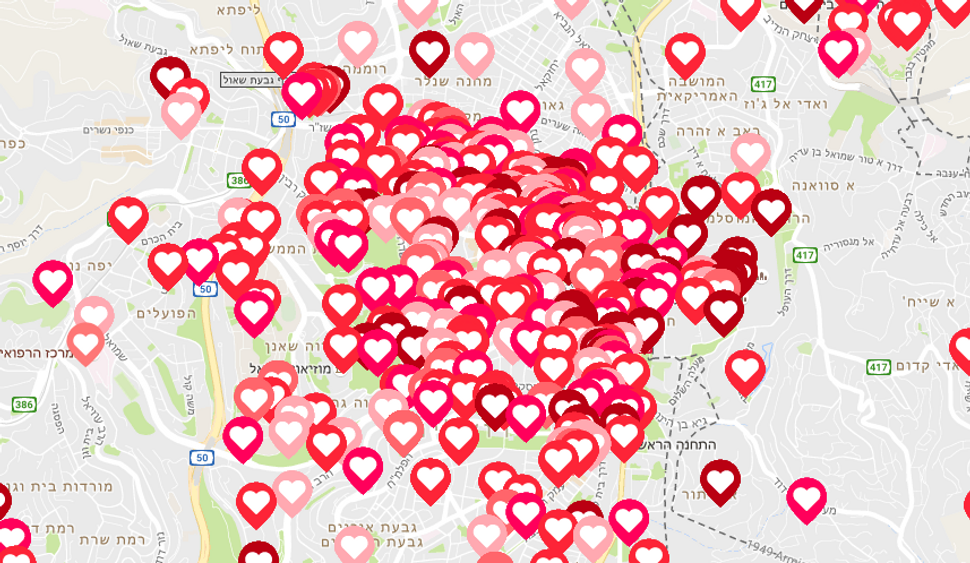 The modern city of Jerusalem has been described many ways — divided, religious, tense and inspiring — but romantic isn’t one typically one of them.

Now, in time for the Jewish love holiday of Tu b’Av on August 19, the Jerusalem municipality is promoting Jerusalem as a city of love by creating a crowd-sourced map of romantic spots in the city.

The online map allows contributors to drop a heart-shaped “pin” on a map of Jerusalem at the spot where they met their partner, had a great date, a first kiss or a marriage proposal, and then share the story of that passionate encounter.

“We many not realize it, but the city of full of love and lovers,” the web site reads in Hebrew. “After all, each of us has a bench, a lamp post, a bus station, a cafe or a garden than reminds us of a love story.”

So far, more than 500 people have shared their stories on the Jerusalem Love Map, almost all of them in West Jerusalem.

One contributor described a spontaneous marriage proposal on the Via Dolorosa, the path that Jesus walked to his crucifixion in Jerusalem’s Old City. “As Jesus taught, ‘All you need is love!’” (Or rather, John Lennon.)

Another contributor recounted meeting a date at the Purim festival in the West Jerusalem neighborhood of Nachlaot. The contributor was dressed as a geek and the date was a cowboy. The contributor recalled “a great conversation, butterflies” and a shared juice in the Machne Yehuda market. But unfortunately the connection didn’t last.

The Love Map is the brainchild of 31-year-old Anna Proviz, the new media manager at the Jerusalem Municipality.

“I think Jerusalem is one of the most romantic cities in the world,” she said. “It is the place where I met my husband.”

Proviz, 31, met her husband at the Hebrew University of Jerusalem campus where they were both students. On the site, Proviz shared her own story of spontaneously proposing to her husband at their first apartment in Nachlaot, after his birthday party.

This week the Jerusalem municipality has placed heart-shaped balloons at the top 10 most romantic sites in the city, according to the number of pins on the map.

At the top of the list is Mishkenot Shaananim, the first Jewish neighborhood built outside of the Old City walls full of renovated historic buildings and lush plants. Next is Zion Square, a public square in downtown West Jerusalem. Third is Nahalat Shiva, a pedestrian promenade near Nachlaot.

Proviz said there is “a little magic” in Jerusalem’s pedestrian corners. “We really just wanted to hear the stories, to find out where are the true romantic places of Jerusalem.”

On the Jewish Valentine’s Day, Creating a Crowdsourced Map of Jerusalem’s Love Stories