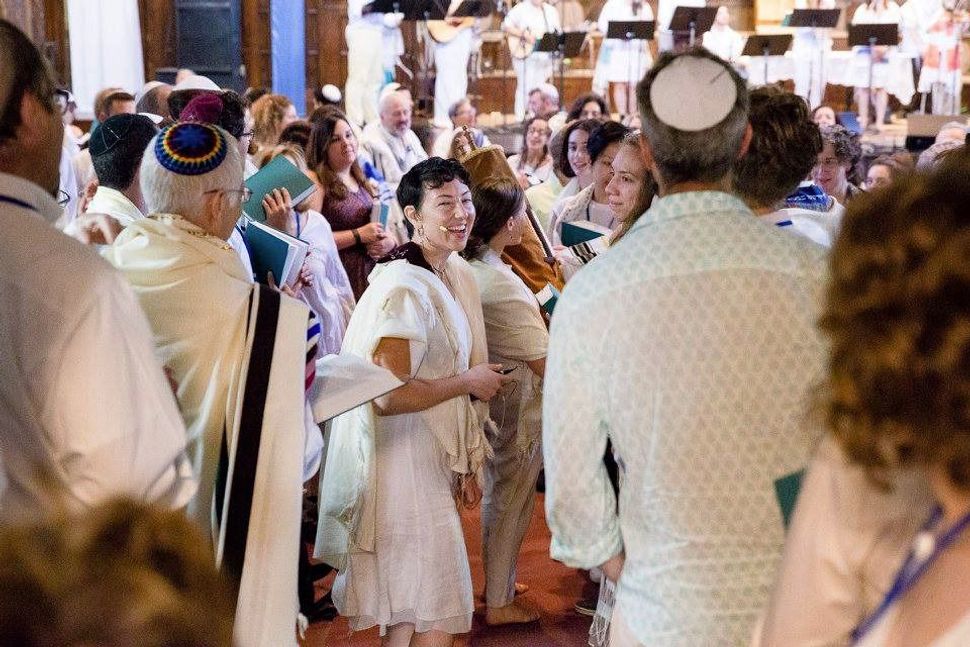 • deep, ancient, multifaceted and modern wisdom tradition
• path to real expressions of tikkun and tzedakah in our broken world
• space for finding community, connectedness and deep real-time human relationships
• path toward a meaningful life in a world of distractions, materialism and chaos

Mishkan Chicago, the spiritual community I started just under 5 years ago, is all about engaging, educating, empowering, and inspiring the next generation in Chicago and beyond through dynamic experiences of Jewish prayer, music, learning, activism and community building. The four propositions in the thesis are basically the organizing principles of what we do as far as our approach to education, prayer, activism and community building. We’re not teaching Judaism so that people will be Jewish… we’re teaching Judaism so that people will be better, happier, healthier, more spiritually connected, more supportive of just causes, more moral, more generous, more socially connected, more aware of what they eat and where it comes from, and on and on. We communicate and create events, workshops, services, and community where the kind of Judaism described in those four propositions is what people FEEL and experience.

The specific set of tools we’re offering to do these things are Jewish traditions. They happen to speak to Jews primarily but not exclusively and they contribute to a more robust overall Jewish landscape beyond Mishkan as well. We’re not reinventing the wheel– we’re representing the sides of Judaism that appeal to people not because they’re Jewish, per se, but because they’re deep, meaningful, enlightening, and socially connecting practices, texts, rituals, celebrations and customs.

With every event we plan we recognize that there’s a brand we represent– inspired, down-to-earth Judaism– and there are specific practices, a checklist, that help us achieve a “Mishkan” program– the active welcoming, not assuming gender or sexuality, not even assuming Jewish background. Singing, irreverence and informality. Real and deep Torah– not Judaism-lite. Time for people to encounter each other as people, not just as program or service attendees. This means that our Friday night services are half an hour longer than many other places’ services– we’re spending time encouraging people to talk to each other, and dwelling longer in each song and kavanah than other places might, so that that feeling of the activity truly sinks in. We’re going for the heart.

The four propositions are great when it comes to the content of the programs themselves but they are insufficient because they’re missing the intentional outreach/engagement component, and that is one place Mishkan Chicago goes beyond what the essay outlined. We have one person on staff whose entire job is outreach and providing a kind of concierge and integration both inside of our community and beyond it. I have definitely experienced groups out there (20s-30s engagement groups, Federation Young Leadership Board, etc) that focus on engagement to the exclusion of deep content, but awesome content without intentional marketing and outreach may fail, too.

Therefore, something else I’d add to your list would have to do with better ways to address outreach to people not “on the inside” already, and specifically relieve anxiety around boundary-issues: Israel affinity, intermarriage, insecurity around Jewish practice and background, and communicate within the community and beyond it that you see people for who they are as people, not just their particular label or side on a boundary issue: anti-occupation, pro-Israel, Jew, non-Jew, raising-kids-Jewish, child-of-Jewish-father, unknowledgeable, doesn’t read Hebrew, etc. We make a concerted effort to speak a language of inspiration and human connection– something we’re all looking for no matter who we are– and peddle that message in all our messaging, inside and beyond our community.