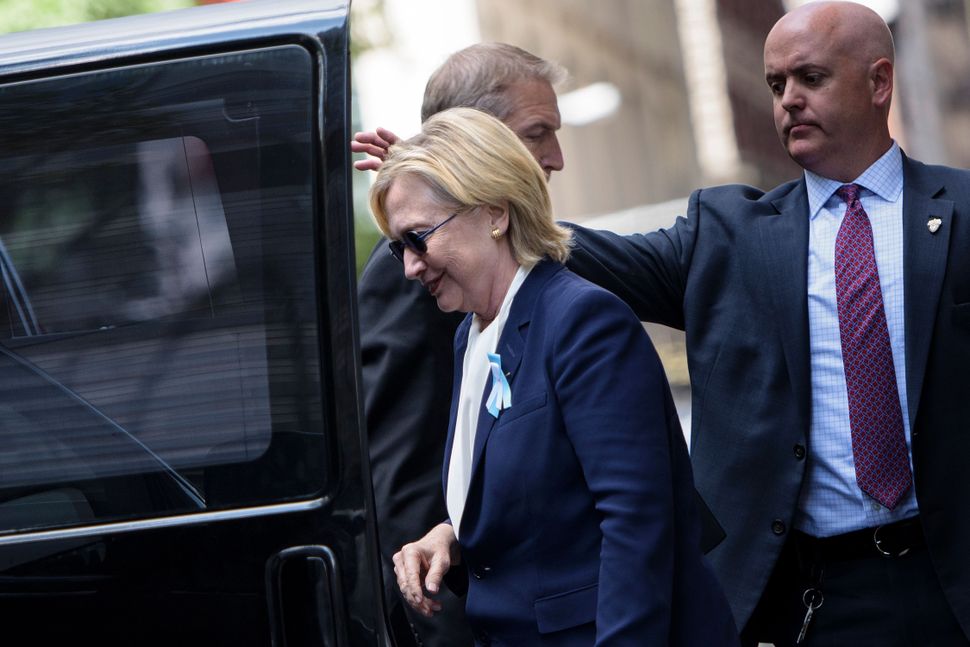 Did Hillary Clinton faint or stumble after leaving a 9/11 ceremony in New York? Is she “physically unfit” to be president, as some conservatives have been claiming for months? And does Sunday’s health episode – which quickly became a major media story – even matter?

If Clinton is seriously ill, then of course it matters. But if she fainted from an illness that’s not chronic, and is curable, should voters be concerned?

Both Hillary Clinton and Donald Trump have shared “substantially less information about their health than some previous presidential candidates,” according to the New York Times. But Clinton provided far more than Trump.

She offered a two-page letter from her personal physician with details about her hypothyroidism and seasonal allergies. Trump released a widely mocked letter from his physician, Dr. Harold Bornstein, in which he stated that Trump “unequivocally, will be the healthiest individual ever elected to the presidency.” Dr. Bornstein later said he wrote the letter in an anxious rush.

The elephant in the room – and the reason that neither candidate has been forthcoming with detailed medical records – is their respective ages. Clinton is 68 and Trump is 70. Neither is at their physical peak. Both are frailer than they were ten or twenty years ago. Neither candidate wants to draw attention to their age.

Why? What do want from a President anyway? We’d do well to look for intelligence and knowledge, rationality and compassion. We might also want diplomatic skills and strategic acumen. But does the POTUS need to bench-press their own body weight?

In a culture that worships youth to the detriment of anyone who’s middle age or older, it seems that too many of us have forgotten that the Presidential race is not actually a physical race.

After Clinton was officially nominated at the DNC convention in July, Stephen Colbert hosted Doris Kearns Goodwin, a Pulitzer Prize-winning presidential historian. (Broad City’s Abbi Jacobson and Ilana Glazer appeared with her). Colbert asked Goodwin if the claim that Hillary Clinton was “the most qualified candidate” to ever seek the office of President was true or just hyperbole.

Kearns acknowledged Clinton’s experience and accomplishments as a public servant, but then went on to say that while experience was important (as was likability), the most essential qualities for a President were temperament, character, disposition, emotional intelligence and resilience. Colbert then asked Kearns which modern day president had the best temperament. Kearns immediately started talking about FDR.

“I mean, think of it,” said Kearns, as Jacobson and Glazer looked on, “The middle of the Depression and what does he do? Comes onto the stage and says, ‘Things are going to be alright because I believe in the future’. He was optimistic. He’d come through polio. He was able to somehow become a huge leader without having the ability to walk on his own power. The minute he got elected people wrote in and said, ‘My roof has fallen off, I’ve lost my job, my dog died, my wife hates me. But its going to be alright because you’re there in the White House.’ Now that’s a temperament that connects with people.”

The usually light-hearted Colbert looked suddenly solemn. “That is a feeling I haven’t seen a politician able to convey in my lifetime … maybe Reagan actually.”

FDR was physically disabled and Reagan was elderly. Though both deceived the public about their true physical conditions – as Clinton and Trump are doing now – FDR and Reagan were able to convey the character and temperament that their country needed.

With less than two months before the election, voters should return their focus to who is best suited to be President. The worship of youth damages our society in countless ways. At the very least, let’s separate that superficial worship from the process of electing a president. Despite his efforts to paint himself as the youthful, vital candidate, Trump is no spring chicken. And neither is Hillary Clinton, who has promised to release more of her medical records in the coming weeks to answer concerns that Sunday’s episode aroused. But as FDR – and Ronald Reagan – proved, a candidate needn’t be physically strong or fighting fit to lead our country. This is a job that requires qualities that are far more substantial.