Adventures of a Secular Jew in Satmar Brooklyn 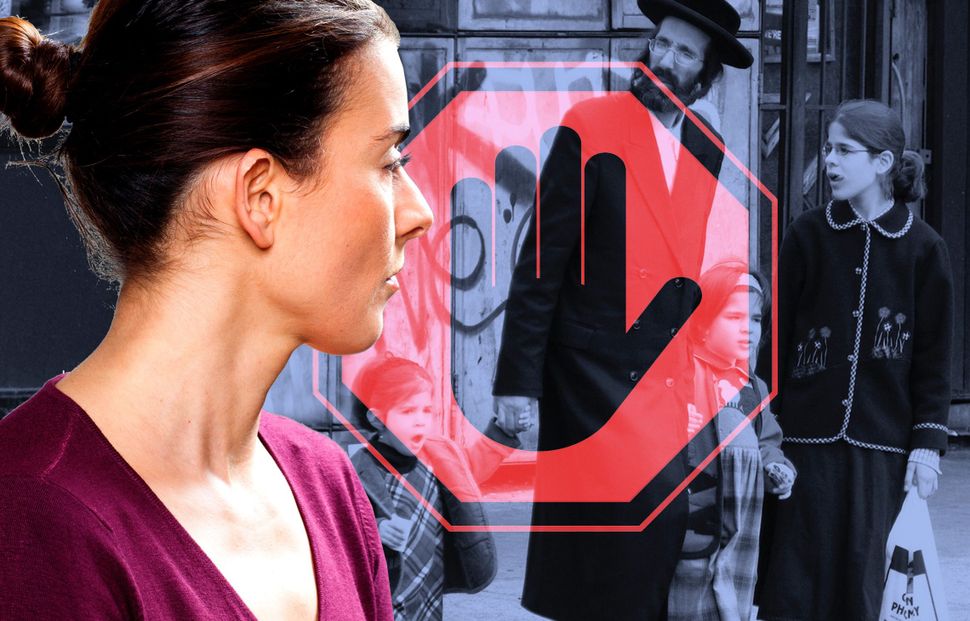 Before we got married, my husband, Tom, lived in an old limestone tenement in South Williamsburg, Brooklyn. North Williamsburg had already become hipsterville, but almost every building south of Broadway housed Satmar families. If you’ve driven through Brooklyn on a Friday night or Saturday morning, you have at least glimpsed Satmar families walking to synagogue, even though they constitute a small sect of Hasidic Jews. You’d recognize the men’s short black pants and white hose — just like the Founding Fathers — and their huge beaver-skin hats or shtreimels. The women, in long dark skirts and blue Oxford shirts, wear both sheitels (wigs for modesty) and hats in all weather. Satmars don’t mix with outsiders.

Tom and I joked that they lived in a coterminous universe, one in which we were invisible. When I bought a straw hat at the Satmar shop around the corner, the owner carefully kept his fingers from touching mine as he took the credit card. The only time a Hasidic man looked at me, I was waiting for the subway, dangly hoops in my ears and my curly hair free. He asked, “Are you Spanish?” I replied, “Jewish. Like you.” He turned and skulked off—that wasn’t the answer he’d wanted to hear.

At the time, Tom was in the midst of a heartfelt conversion to Judaism. We attended services and classes at a progressive Reform synagogue in Park Slope. I felt mixed feelings toward his Satmar neighbors: wonder, respect, sadness that they’d never speak to us. We were all Jews. We believed in the same values of charity and lovingkindness. I knew it might be hard for women who dressed modestly to look past my black minidresses and red cowboy boots, but I longed for a way to reach out.

Shortly before our November wedding, Tom and I decided to paint his bookcases. To do this, I wore an old t-shirt I’d painted my dad’s whole house in and a timeworn, ankle-length skirt. I tied a bandanna over my hair to keep it clean. Halfway through the afternoon, I put on my coat—a long woolen one, my one extravagance when I’d sold my first novel—and ran out to get lunch.

I had barely turned the corner before a Satmar mom with three small children asked me a brusque question in Yiddish. I startled. In my family, Yiddish was the language old people used when they didn’t want kids to understand them, so I felt a sudden anxiety, desperation to understand words that weren’t meant for me. Before I could respond, she switched to English. “Do you have the time?” she asked, impatient.

I checked my wrist. “It’s three-thirty.”

She huffed, and shook her head in the kids’ direction. “A dank,” she said. Thank you.

She continued on and I kept walking toward the supermarket, my heart pounding. A Satmar woman had seen the bandanna covering my hair, my tweed coat, and my long skirt, and must have made the swift judgement that I dressed oddly but was one of her own.

In my surprise, I had blown the chance to have a meaningful interaction with her, yet as I walked into the market, I felt she had unwittingly given me a gift. In the neighborhood, I had been looking at the ground, averting my gaze so others wouldn’t have to. But in my painting clothes, I was free to look up — to see and be seen. An older woman choosing oranges raised her eyebrows at me as I perused the produce aisle. I took my time shopping for seltzer, a loaf of bread, and kosher turkey for sandwiches. On the two-block walk home, I spoke to no one, but began to imagine how I could.

During the few weeks until Tom moved out of South Williamsburg and into my Brooklyn Heights apartment, I considered wearing the skirt (now speckled with cream-colored paint) again, maybe with a tichel, or hair scarf. It didn’t seem right to put on what amounted to a costume simply to invite human interaction. At the same time, as I walked the neighborhood we would soon leave, I felt keenly the loss of something I’d had for only the briefest moment. I told myself to keep looking for some more lasting way to become visible, to reach across the superficial divide between our worlds.

Emily Barton is the author of the novels The Book of Esther, Brookland, and The Testament of Yves Gundron. You can follow her on Facebook and Twitter.

Adventures of a Secular Jew in Satmar Brooklyn