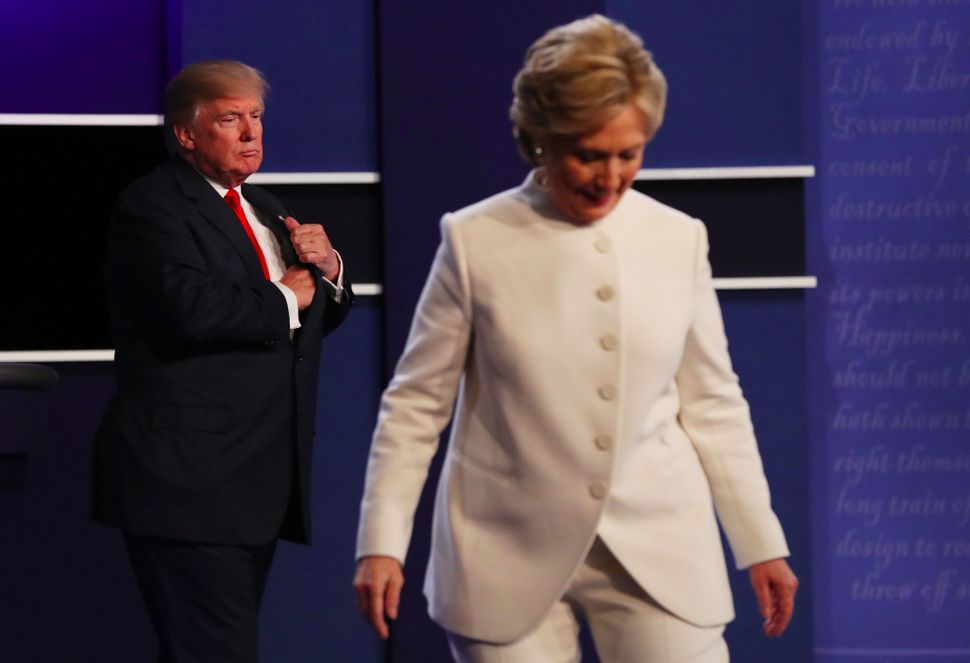 The third, and nastiest, of the 2016 presidential debates. Image by Getty Images

“Nobody has more respect for women than I do” is, coming from Trump, the sort of lie that can’t be fact-checked. It’s like when the pizza place on the corner, the one with no customers, puts up a sign declaring it has the “best pizza” in New York.

By the time Donald Trump got around to muttering “Such a nasty woman” at-and-about Hillary Clinton, the third presidential debate had long since reached the point where it didn’t seem anything would have the power to, as Trump would put it, “surprise.” Trump was all about surprises, having already, by that point in the WTFiest yet of these debates, announced that he would surprise the country with whether or not he’d accept Clinton as the winner of the election, should she, uh, win the election. So, yeah, there was the part of the debate where we learned there might be a civil war, but then it calmed down again and they were sort of wrapping up and then, interrupting Clinton discussing Social Security, out it came: “Such a nasty woman.” I didn’t quite believe what I’d heard. Did he really just say that? Because it seemed like the sort of thing he’d say, so maybe I was just imagining it? No, not imagining it.

It would be inaccurate to describe that moment as the debate’s low point. Once Trump announces he’s prepared to see abortion made illegal; once a presidential debate is rife with discussion of one candidate’s sexual assault history, which he deflects by praising himself for having not apologized to his wife; and oh, once the American democratic project is kaput – that is, once we’ve segued from a flirtation with social conservatism to full Trumpian fear-mongering – what’s a little insult between rivals?

The “nasty” remark was, well, nasty. But it also brought with it a satisfaction akin to when someone’s being terrible to you in private – say, a bigoted colleague or classmate – and you’ve been telling people and no one has believed you and then, boom, they say the thing in public, and everyone’s finally on your side. Which is maybe why “nasty” has gotten so quickly re-appropriated by Clinton supporters. If standing up to Trump with Hillary Clinton’s courage is “nasty,” what good is nice?