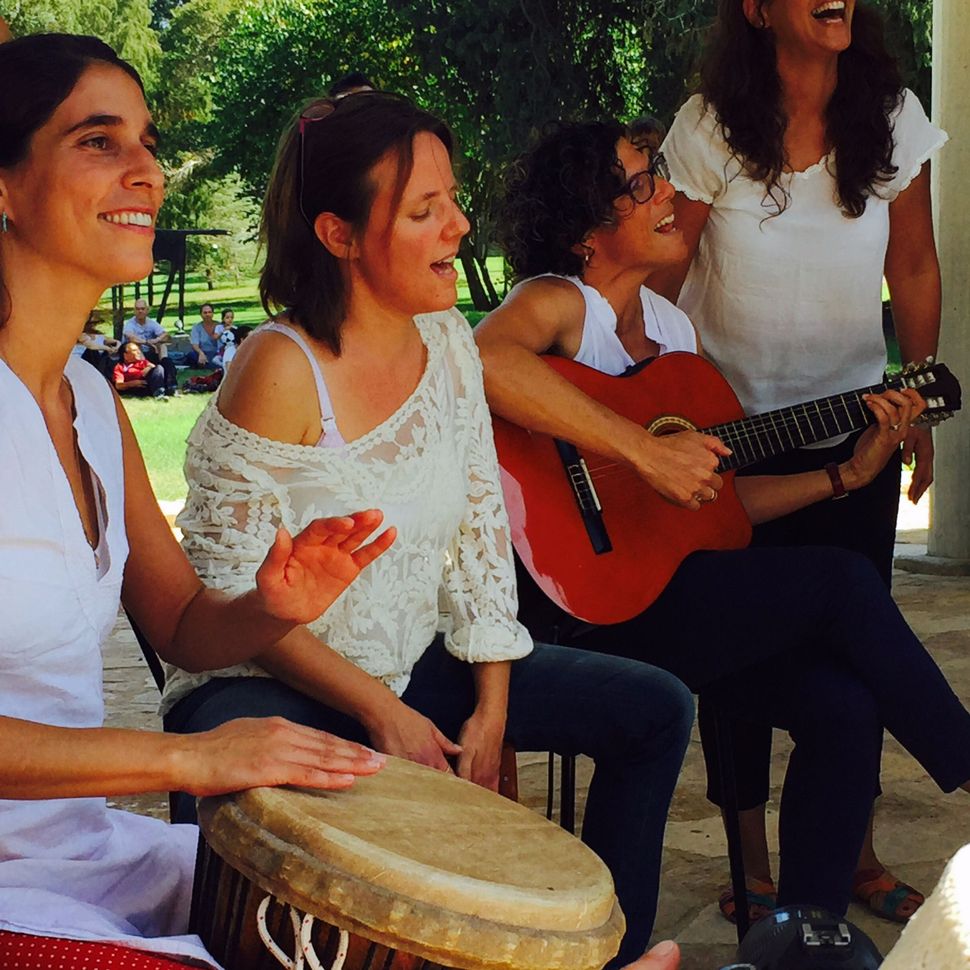 Songs of peace: The crowd breaks into a rendition of Od Yavo Shalom Aleinu by Moshe Ben Ari at a gathering in Kibbutz Hazorea. Image by Maayan Jaffe-Hoffman 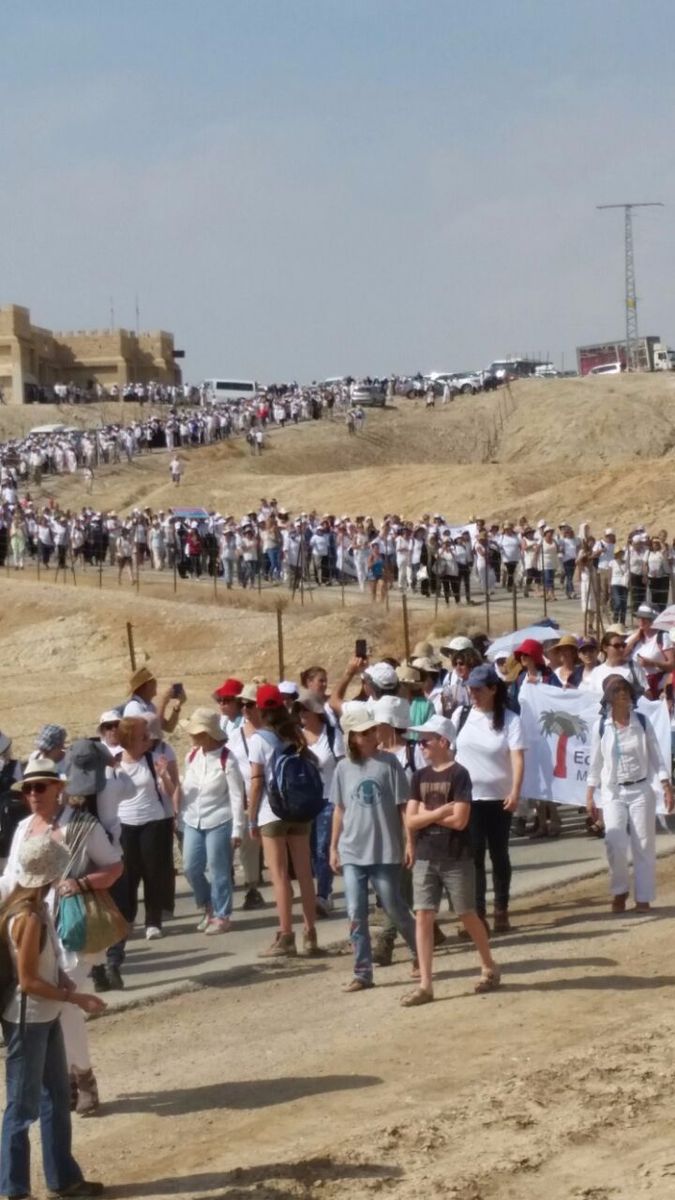 Masses of women wearing white and chanting songs of peace made their way through the dust of northern Israel on their way to Kfar Yehoshua in the Jezreel Valley. It was the fifth day of the March of Hope, and a core group of 19 women, surrounded by hundreds of supporters, were walking for peace.

“We really needed to get off our couches and away from our phones and physically do something, otherwise we remain passive and resigned,” said Donna Kirshbaum from Omer in southern Israel. “We are literally putting one foot in front of the other for peace.”

The March of Hope, a program of Women Wage Peace (WWP), kicked off as Rosh Hashanah ended on October 4th. Jewish and Arab Israeli women gathered in Rosh Hanikra in northern Israel to begin a 150-mile, 14-day trek to Jerusalem, which culminated on October 19th with a massive protest in front of the President’s and Prime Minister’s residences. In Jerusalem, the women called for a restart to Palestinian-Israel peace negotiations. Many people are hosting the marchers along the way.

Local marches and events are taking place all over the country, including a torchlight parade, a traveling performance of “Looking Peace in the Eyes,” children’s activities, art exhibits and rallies featuring prayers for peace. 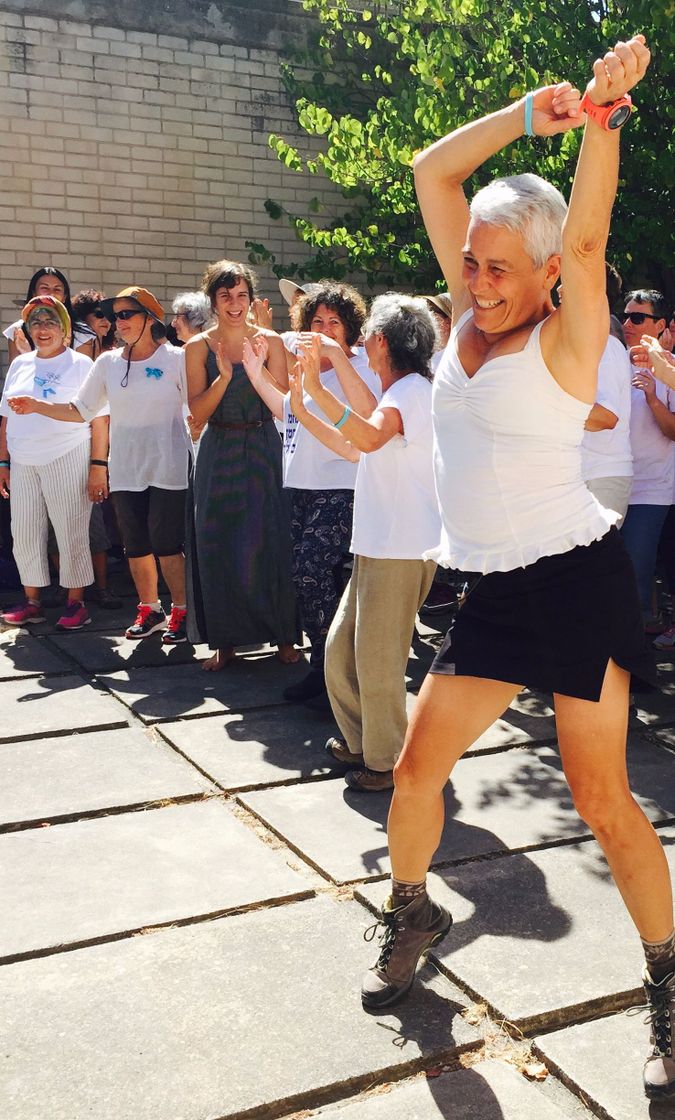 Dancing for peace at a Kibbutz Hazorea gathering, hosted by The Megiddo Regional Council. Image by Maayan Jaffe-Hoffman

Hagit Lavie, a Jewish Israeli who planned the marchers’ route with Palestinian Huda Abuarquob, said the path enables participants to recruit additional followers, including those who are already actively involved in peace work.

Early in the morning on the March of Hope’s final day, women from Israel marched 3.7 miles together with 1,000 Palestinian women from the Allenby Crossing to Qasr el Yahud in the Jordan Valley. 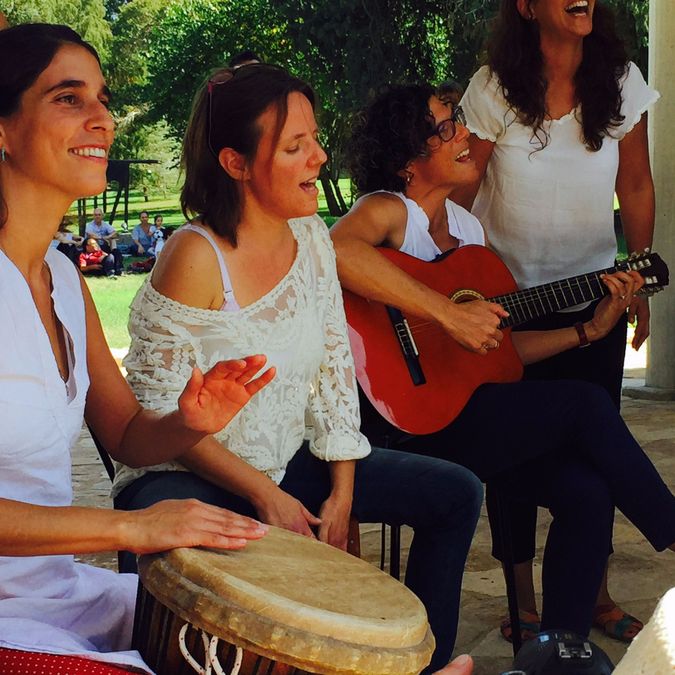 Songs of peace: The crowd breaks into a rendition of Od Yavo Shalom Aleinu by Moshe Ben Ari at a gathering in Kibbutz Hazorea. Image by Maayan Jaffe-Hoffman

“Hearts are connecting and we’re receiving overwhelming support from mayors and municipal leaders, journalists, men and women from all over the world, including the Arab world, and in particular from many thousands of civilians who are searching for hope,” said WWP Chairwoman Yael Admi in her opening speech.

“It’s time the silent majority spoke up,” said marcher Helene Gozani from the Ella Valley. “We have the power in our hands.”

Lavie said the march is inspired by some of the great marches of history – the 1930 Salt March led by Mahatma Gandhi, Martin Luther King’s March for Freedom and the One Thousand Women March in Liberia, which played a key role in ending the Second Liberian Civil War.

WWP, named for Judyth Hill’s “Wage Peace” poem, written following the tragic events of 9/11, was started two years ago by 40 Israeli mothers of soldiers who were serving in the 2014 Gaza War. Today, WWP has 1,000 Jewish and Arab members and close to 9,000 Israeli supporters from every religious and secular stream and region of the country. Volunteer run, with a network of 17 regional coordinators and 21 work groups, 57 percent of WWP’s funders are Israeli philanthropists. It is the largest women’s grassroots movement in Israel.

“We know this cannot be another well-meaning leftist initiative,” said Kirshbaum. “Either this is all of us, or it is not going to happen.”

Kirshbaum said the word “shalom” has become a four-letter word at worst, and an impossible ideal at best. She said part of WWP’s task is “to reclaim the word shalom for everybody.”

The WWP demands the following: Establishment of a government office of Peace and Reconciliation, a Peace Cabinet tasked with developing a strategic plan for peace and a Peace Department in the PM’s office responsible for resolving security crises through political means rather than violence. They also demand that the government integrate women into all governmental bodies and negotiating teams.

Kirshbaum said WWP is “not against men,” but knows women bring “a richer language of connection” to the negotiating table.

WWP does not back a specific peace plan, but rather an immediate resumption of direct peace negotiations.

“Many wait for utopia, but we know that does not exist,” said Lavie. “Our hope is a practical hope.”

Kirshbaum said efforts will not cease following events on the 19th. Rather, that protest will launch a very serious monitoring effort by a committee of women charged with exerting ongoing pressure on the government to promote the implementation of WWP’s demands. WWP received a two-year grant from the European Union to train 500 female peace activists.

“There were so many nights that I could not sleep because of the pain,” said Admi, who lost her brother nearly 50 years ago in the War of Attrition. “Now I believe we can get to a place of peace, a joint future. We will not stop until an agreement is reached.”